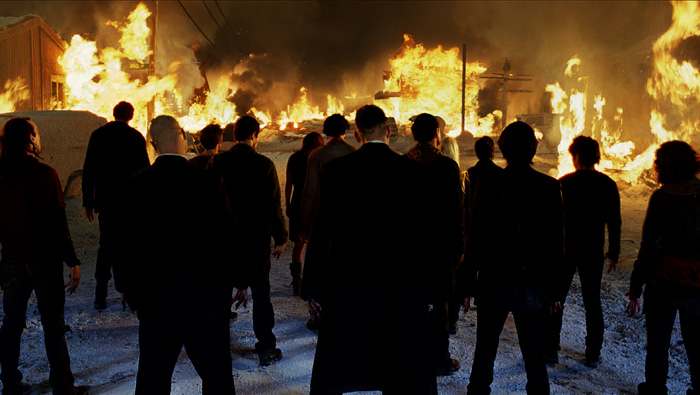 In the northernmost town in the United States, Barrow Alaska, population 152, Sheriff Eben Oleson (Josh Hartnett, "The Black Dahlia") is witnessing a disturbing upward tick in crime. A pile of burned cell phones is odd, the mutilation slayings of John Riis's (Peter Feeney, "Black Sheep") sled dogs horrific. Then The Stranger (Ben Foster, "3:10 to Yuma") demands raw meat and threatens diner owner Lucy Ikos (Elizabeth Hawthorne, "The Chronicles of Narnia: The Lion, the Witch and the Wardrobe") before telling Eben he is a dead man just as Barrow is plunged into "30 Days of Night."

Steve Niles and Ben Templesmith's graphic novel has been adapted by Niles and Stuart Beattie ("Pirates of the Caribbean: The Curse of the Black Pearl") and its big screen translation does for the vampire what "28 Days Later" did for the zombie - they're faster and more vicious than our monsters of yore. After a quick build that climaxes by Eben finding a head on a pike, "30 Days of Night" stays a relentless and gory course, albeit one that overstays its welcome. The film may be faithful to its source material, but it would have benefited from a good twenty minute trim. Wisely, Barrow is populated with people to care about. Eben, whose homey sheriff's office features his grandmother and fifteen year old brother Jake (Mark Rendall), is despondent over the break up his marriage to Stella (Melissa George, "The Amityville Horror," "Turistas"), a fire department martial who conveniently misses the last flight out of town. Deputy Sheriff Billy Kitka (Manu Bennett, "Lantana") offers to put her up with his wife and two young daughters. Beau Brower (Mark Boone Junior, "Memento") is the town's self-exiled outcast. After John Riis loses his dogs, his wife is snatched from their kitchen by a creature that crashes through a window and drags her beneath the foundation of the couple's barn. There's a man caring for a father with dementia. With the town quickly plunged into bloody mayhem, a group of survivors bands together to plot a migration to a safe haven. The idea of a snow-covered land without sun is a great idea for a vampire updating and visually at least, the filmmakers have really worked the concept. Cinematographer Jo Willems ("Hard Candy," "Rocket Science") makes beautiful work of the fading of natural light, then makes Barrow even more magical as a darkened town spotted with glowing electric haloes. The white snow and black darkness contrast, punctuated with blood and the fire engine red of Stella's uniform, naturally brings the graphic novel page to life, and blizzarding snow, a blanket of white 'light,' provides a cover for human movement amidst the creatures of the night. Furthering the Arctic theme, the vampires themselves are like uber-Slavic, vulpine creatures (they even speak a subtitled, foreign language), suggesting a migration following the Eskimos, truly ancient beings. Director David Slade ("Hard Candy") ensures there is gore aplenty. Eben becomes an ace decapitator (in a nod to genre conventions going all the way back to Romero's original "Night of the Living Dead," he gets to make mincemeat of a little girl in a blue dress), and the vampire attacks are alternately fast and brutal, more like the chompings of a zombie that a mere bite on the neck, or teasingly tortuous, such as the flaying of a young women the creatures unsuccessfully use as bait. If lead vamp Marlow is played by Danny Huston ("The Constant Gardener," "The Kingdom") with a self importance that becomes seriocomic, his partner, Iris (Megan Franich), is terrifying in her all-consuming bloodlust. As the story's Renfield stand-in, Ben Foster, the current go-to boy for psycho loonies, is boringly typecast, though. Can this guy do anything else? If only Slade ensured his film moved as fast as his vampires. Instead it begins to feel like 30 days and when Slade gets to his big climatic battle, it's all too overwrought. An early introduction to the 'Muffin Monster,' a giant steel shredder at the town's Utilidor waste treatment plant, is all too obviously a set up for its eventual use as a meat grinder, an apt metaphor for what sitting through this film feels like. "30 Days of Night" works in its updating of ancient folk lore, but wears us down with its extended jack hammering approach.