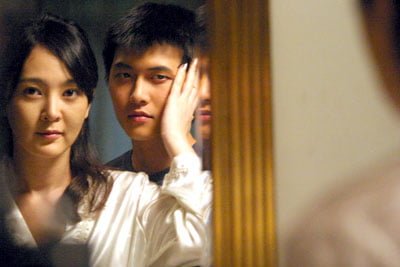 Tae-suk (Jae Hee) spends his days attaching restaurant flyers to residence doors to figure out where he'll spend his evenings - those doors that still bear his mark are assumed to be vacant and Tae-suk breaks in for a night's lodging. The man is not a thief. In fact, he leaves premises better than he found them, fixing appliances, doing laundry and caring for plants like a ghost. One night, though, he's watched by an abused woman. Sun-hwa's (Lee Seung-yeon) husband beats her and when Tae-suk finally witnesses his involuntary host's behavior towards his wife, he avenges her with her husband's handy "3-Iron."

Korean filmmaker Kim Ki-duk ("The Isle," "Spring, Summer, Fall, Winter... and Spring") is a virtual one man band marching in parallel to the new Korean film wave. The unclassifiable producer/writer/editor/director, who followed some pretty sadistic flicks with a poetic paean to Buddhism, this time spins a metaphysical romance where the lovers themselves never verbally converse. The first image Kim gives us sums up his subtext. Golf balls are being driven at a practice net which is the only protection offered the classical, white marble female statue behind it. This is the unseen Min-kyu (Kwon Hyuk-ho) practicing in his back yard. (Later the image will be repeated when Sun-hwa steps in front of Tae-suk's swings at a tethered ball. Tae-suk refuses to aim at Sun-hwa's figure, but is persistent - when she finally retreats, a tragic accident occurs.) After Tae-suk fells Min-kyu, Sun-hwa runs away with him, jumping onto the back of his BMW bike (oddly, Min-kyu also drives a BMW - has Kim jumped the produce placement bandwagon or is he looking to direct their next commercial series?) and falling right into his outsider routine. The first home the couple crash is that of a boxer, who comes home with his wife in the middle of the night and beats the stranger occupying his bed - now it's Sun-hwa's turn to care for Tae-suk. They stay in a photographer's digs, where her picture is prominently displayed, and in a beautiful, traditional home of great charm, where they first make love. In a poorer part of Seoul, Tae-suk opens a door in a complex and back away, but Sun-hwa pushes forward to see a old man lying dead on the floor, his little dog standing sentinel. They stay, cleaning the room and giving the man a ceremonial burial, but when his son comes calling, the two are arrested. She is turned back to Min-kyu's custody and Tae-suk becomes prisoner 3904 and evolves onto another plane as he awaits his release. Violence always exists in Kim Ki-duk's films - even the lovely "Spring, Summer" features the violence of man and nature. In "3-Iron," violence is the antithesis of spirituality and spirituality is the essence of Tae-suk's character. He is a ghost whose only physical representation is in the photographs he takes with the family portraits that hang in the homes he borrows. In fact, Tae-suk first connects with Sun-hwa through her photograph, a model pose hanging in her home which is later found again in the photographer's shop. Only Sun-hwa, a woman hidden from society because of her domineering husband and her bruises, sees Tae-suk. Tae-suk later taunts his jailor (Choi Jeong-ho) with his ability to 'disappear,' a talent learned for Kim's brilliant conclusion. Jae Hee utters not a single word, but pulls us into his mindset quickly. The handsome actor has the elegant physical carriage necessary for this unique role and makes a novel romantic lead. Lee Seung-yeon plays a shadowy character, but truly blossoms as the film unspools. Her two lines in the film's final scene and her delivery mark a different woman than the one we first encountered. Kwon Hyuk-ho has the mercurial facial expressions that allow him to quickly flit from reason to unreasonable outrage and Choi Jeong-ho adds some comic touches as Tae-suk's frustrated jailor. The film is structured as a series of stepping stones, each home representing a new plateau. Art director Joo Jin-mo has created startling spaces for the characters to inhabit, each completely different but of its place. "3-Iron" belongs to the ghostly romance genre of such films as "The Ghost and Mrs. Muir" and "Last Life in the Universe," but Ki-duk's film has its own, haunting imprimatur.

Tae-suk (Jae Hee) drives his motorcycle into a neighborhood, hangs restaurant flyers on every door and sits back to see which home is vacant, then moves in. He never steals anything, fixes broken appliances, does the owners’ laundry, cleans the place and moves on. One empty home, unbeknownst to the young man, is occupied by a battered young wife, Sun-hwa (Lee Seong-yeon), whose abusive husband (Kwon Hyuk-ho) is away. Tae-suk leaves after his discovery but is compelled by his heart to return and rescue the damsel in distress with a “3-Iron.” This is a wonderfully lyrical little film by Kim Ki-duk, the creator of such visually stunning works as The Isle (2000)” and “Spring, Summer, Fall, Winter…and Spring.” In “3-Iron,” like “The Isle,” nary a word is spoken (directly, at least) between the two leads and, instead of being ponderous or pretentious, gives the film a light, airy feel. The physical and emotional chemistry between characters Tae-suk and Sun-hwa speaks more volumes than could be said if Kim had given them voice. Tae-suk saves Sun-hwa from the brutish clutches of her abusing husband as she joins him in his unusual lifestyle. Things are idyllic for the silent couple as they move from home to home, fixing things and cleaning up before moving on. The string of changing homes comes to an abrupt end when they move into an apartment where the owner has just died. The couple buries the man with touching ritual then occupies his apartment. That is, until the dead man’s son arrives and Tae-suk is arrested murder and kidnapping. 3-Iron” enters its next phase as Tae-suk is imprisoned and Sun-hwa is returned to her cruel husband. But, Sun-hwa is a changed woman and her husband’s loutish and violent ways no longer affect her and they resume their “normal” life. Meanwhile, Tae-suk is an uncooperative prisoner who delves into his own mind to find freedom within his four walls. This is where things get mystical and the romance reaches a new level that is unexpected and beautiful. Kim Ki-duk is a filmmaker that, with my little experience with his work, marches to his own tune. 3-Iron” is an assured, work that uses its characters silence as a tool to telling his story. The behind the camera work complements the efforts of the director and his actors with the various locations giving a cross section of living in Seoul, Korea. The South Korean film industry has come into its own on the world playing field and the quality and diversity of film rivals the birth of Iranian film on the international scene a few years ago. “3-Iron” is a worthy entry into that country’s film archive.