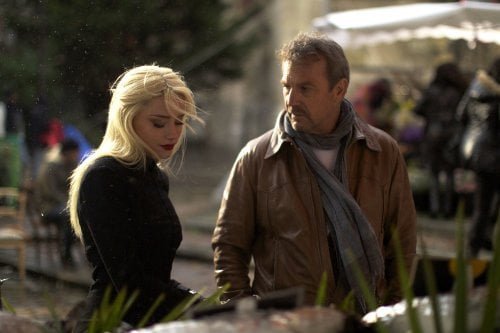 Ethan Renner (Kevin Costner) is a ruthless CIA contract killer who plies his trade around the world, to the detriment of his wife, Tina (Connie Nielsen) and especially his daughter, Zooey (Hailee Steinfeld). When he learns that he is dying of cancer, he decides to quit the spy biz and get to know Zooey as a real father. But first, he must do one more job for the Company and take down a ruthless terrorist leader called the Wolf (Richard Sammel) in “3 Days to Kill.”

OK. You figure that “3 Days to Kill” has a bankable director with McG at the helm, a story by the venerable Luc Besson and starring A-lister Kevin Costner, so it should be a decent watch, right? Think again. What we do get is a film that does not have a clue as to what it wants to be. Is it a action thriller about a CIA killer closing out his career? Or, is it a family story about a father trying to make amends to the daughter he abandoned (for her own good, per Ethan) years before. Trick question; it is both and fails to do either even remotely well. The first part is about Ethan’s job as a ruthless killer of the enemies of his country. He shows his mettle by taking out five bad guys – though he was supposed to kill just one – at the film’s start. Then, he learns about the cancer and that he has just three to five months to live. This brings him to the realization that he has missed his daughter’s growing up. Here is where “3 Days to Kill” gets both silly and sappy as Ethan teaches his 16-year old daughter how to dance (by standing on his feet as if Zooey is a four-year old) and how to ride a bicycle (again, as if she if four) in order to win back her love. “3 Days to Kill” tries to be a gritty, violent spy drama and a heart warming family-oriented father/daughter story. The mix simply does not work as the viewer must move between action and smarmy comedy. This jumping back and forth between genres is distracting and I never once found a rhythm or rhyme to the choppy story. My hopes, going into “3 Days to Kill,” were that maybe, just maybe, I was going to see something akin to Liam Neeson’s “Taken” about a father rescuing his kidnapped daughter from white slavers. If only there was something like this in the skewed plots of McG’s last work. Kevin Costner, Hailee Steinfeld and Connie Nielsen are wasted talent in this ill-conceived yarn. Amber Heard, as CIA spook and Ethan’s handler Vivi Delay, does the femme fatale thing well but her character (like most of the film) does not make sense. “3 Days to Kill” does not know what kind of film it wants to be and that is not a good thing.