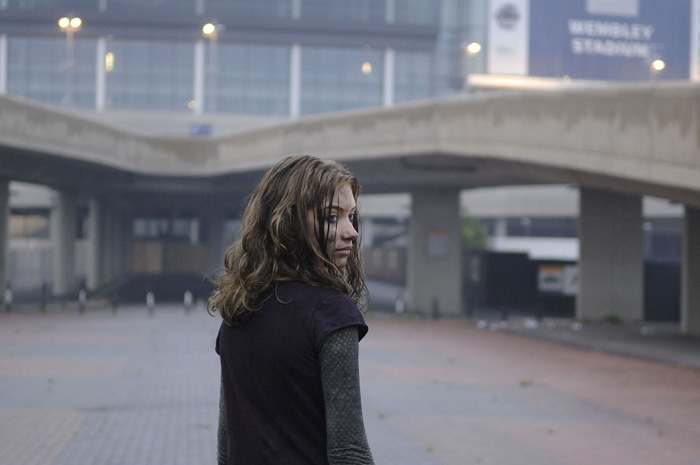 When animal rights activists released a group of infected chimpanzees, the effect on Great Britain was devastating. The survivors of infectious disease and its deadly Rage, quarantined from the rest of the world, struggle to join the humankind once again. Six months later, with US troops occupying a now safe sector in London, it looks like things will get back to normal (or will they?) in “28 Weeks Later.”

Contaminated by the rage virus, Great Britain is evacuated, leaving the few uninfected to fight for themselves. Don (Robert Carlyle, "The Full Monty"), who abandoned wife Alice (Catherine McCormack, "Braveheart") in terror during an attack, lives to meet the U.S. led NATO force's quarantine and repopulate a protected District 1 with the refugeed teenage daughter and twelve-year-old son who return "28 Weeks Later." Cowriter (with Rowan Joffe and Jesús Olmo)/director Juan Carlos Fresnadillo ("Intacto") ably takes over the reins from Danny Boyle ("28 Days Later") and slams us into the sequel with an opening sequence as powerful as Zack Snyder's "Dawn of the Dead" remake. And while "28 Days" lost much of its power in its final act, its sequel is an incendiary critique of the U.S. handling of Iraq and its own allies. Loving couple Don and Alice hunker down in an elderly couple's country cottage along with a handful of others, including a young woman holding out hope for the return of her boyfriend. But as she peers out from a barricaded window, she is pulled through the wall by a rabid group of infected. The house is under siege, and separated from his wife in an upstairs bedroom by a murderous zombie, Don cuts and runs, escaping by a window and running, running, running. The U.S. declares Britain virus free after all the infected die off of starvation, the few survivors believed to all be quarantined. Military nurse Scarlet (Rose Byrne, "Marie Antoinette") is agitated when she discovers the first 500 to return include Andy (newcomer Mackintosh Muggleton), a mere 12-year-old, but she also notes his different colored irises, an oddity inherited from his mother. Don tells Andy and older sister Tammy (Imogen Poots, "V for Vendetta") about their loss and cries that there 'was nothing I could do,' but the very next day, after Andy worries he will forget his mother's face, the two slip past security to make their way home. Just guess who is waiting there for them... The eye color discrepancy, as it turns out, appears to act as immunity to the rage virus, but as Scarlet soon discovers, that does not prevent the survivor from being a carrier. Secured to a hospital bed, Alice receives a visit from her guilty mate and one kiss later becomes his first victim. Not much later, District 1's General Stone (Idris Elba, HBO's "The Wire") admits 'we have lost control,' and the remaining uninfected, including Scarlet, Andy and Tammy, must fight not only the enraged but the U.S. military in extermination mode. "28 Days Later" drew its dread from the unexpected speed of its zombies and the eerie emptiness of a world class city. In "Weeks," Fresnadillo uses the visceral techniques of closely cropped framing, warp speed editing, moody droning music and plain old splatter to shock the senses while engaging the mind with allegorical imagery like piles of biohazard bags on sidewalks and clouds of gas billowing down a city street. Fresnadillo's London shares the desolation, military occupation and consecration of society's youngest found in the equally political "Children of Men." In many cases, the style of the film must compensate for weaknesses in story. Don's ability to constantly cross Andy's path stretches believability just as Andy's 'disappearance' in a subway sequence is nonsensically convenient. Still, Fresnadillo may also be admired for bucking convention, setting up Special Forces sniper Doyle (Jeremy Renner, "Dahmer," "North Country") as an ugly American and his helicopter pilot buddy Flynn (Harold Perrineau, "The Matrix Revolutions") as a victim then standing expectations on their ear. "28 Weeks Later" is a gutsy bit of genre filmmaking which is more wholly satisfying than its predecessor. Executive producers Boyle, MacDonald and Garland have their work cut out for them choosing a director for the final film or their now trilogy.

This sequel to the popular “28 Days Later” continues the story of the contagious disease that turns a normal person into an enraged, murderous monster. Don (Robert Carlyle) and his wife Scarlet (Rose Byrne) are hiding out with a small group of survivors when a young boy implores them to let him in. Little do they know that a whole bunch of the rage driven beasts were on the boy’s heels. They smash into the cottage and tear the survivors to pieces. Don is the only one to live through the attack but it leaves him with a deep, dark secret. Flash ahead six months and American soldiers have secured a portion of London where the survivors of the horrendous plague can find safe haven. Brits that fled the country are now allowed to return, including Don’s two children, Andy (Mackintosh Muggleton) and Sally (Emily Beecham). He tells his kids about their mother’s death explaining, “I tried to help but she was already gone!” Andy confides to Sally that he is afraid that he will forget what his mom looked like. The pair decides that they are going to sneak out of the sanctuary and go back to their old home to find Andy a picture of his mother. What they find there is a shock. They find their mother hiding, alive, and army troopers take the trio back to the refuge. The question from an Army doctor (Catherine McCormack) is: why didn’t Scarlet become a killer mutant? As sequels go, “28 Weeks Later” is a decent follow up work to its Danny Boyle-directed original. The beginning of the film, when the zombies attack to survivors, is overwhelming with its manic, bloody assault, shot with a grainy, saturated look. Although the action is a bit muddled with its close up ferocity, it is a startling opening. Director Juan Carlos Fresnadillo, sharing script credits with Enrique Lopez Lavigne, Rowan Joffe and Jesus Olmo, does a solidly entertaining job in making 28 Weeks Later” stand on its own, not an easy thing to do with a sequel. Only a cursory knowledge of the original is all that is needed for the viewer, allowing the sequel to travel its own road. In a film like “28 Weeks Later,” the acting takes a back seat to the bloody action but the cast does a pro job in making the characters sympathetic. You invest yourself in their lives of survival so, when they are decimated one by one by the Rage zombies, you feel the loss of each. Techs are slick, creating a small oasis of survivors in a desert of monster-occupied London. The battle against the zombies is bombastic in its scope, creating a city under siege. The script has a few creaks in it as one monster (I won’t say who) appears, menacingly, in the most unlikely times and places to menace the heroes. This and other clunky moments can be forgiven because of the sheer enthusiasm of the filmmakers. I can say one thing: you won’t be bored.