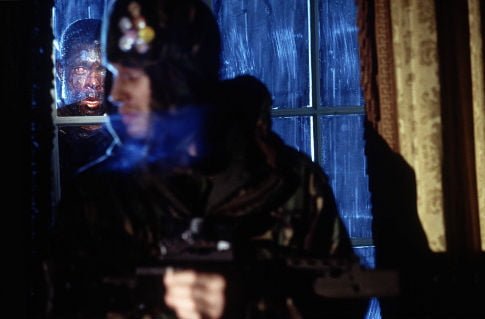 Animal rights activists break into the Cambridge Primate Center and are horrified to see chimps being force-fed visuals of extreme human violence. A terrified lab assistant tries to warm them that these chimps are infected and freeing them will have calamitous circumstances. Bike messenger Jim (Cillian Murphy), having been hit by a car (road rage?) awakens in a deserted hospital on an empty street in the eerily vacant city of London "28 Days Later."

Director Danny Boyle ("Trainspotting," "The Beach") makes great use of the digital video format (with Dogme favorite, Director of Photography Anthony Dod Mantle ("The Celebration") for his post-apocalyptic/undead 'zombie'/survival tale. "28 Days Later" is short on real scares, but it is a solid genre offering with some eerie moments. Although we know from the opening sequence that a 'Rage' virus has become uncontained, we piece together what has happened in the ensuing four weeks along with Jim. He encounters vandalized vending machines and greedily gulps an unopened Pepsi. A kiosk is papered over with pleas for info on missing persons (which instantly conjures up 9/11, although this scene was shot months earlier). An abandoned newspaper's headline screams 'EVACUATION!'. Yelling 'Hello!' over and over (a signature word for the film), Jim is met with silence in one of the world's largest cities. Until, that is, he discovers a cache of stacked corpses in a church and a priest, infected, rushes towards him with blood red eyes. Running from the priest and other 'infecteds' roused by the commotion, Jim is covered by Selena (Naomie Harris) and Mark (Noah Huntley), two survivors using homemade flamethrowers who guide him to a barricaded convenience store. Although Mark tells Jim a horrific tale of losing his family, Jim is given evidence of Selena's emotional closedown when she takes action 'in a heartbeat' after Mark is infected. Selena and Jim find a father, Frank (Brendon Gleesan, "The Gangs of New York"), and his daughter, Hannah (Megan Burns, "Liam"), holed up in a high rise apartment. Frank's found a shortwave signal from an army unit in Manchester offering a solution to the virus, so the foursome set off in Frank's cab. Only three of them will make their destination and they may not be the lucky ones. "28 Days Later" is more a psychological survivor thriller akin to the Cold War tales of battles over bomb shelters than it is a monster flick, although its grainy, retro look links it with such genre standards as "Night of the Living Dead." Except for the modern idea of rage itself being a virus, "28 Days Later" is an amalgamation of plots and images we've seen before (most recently, "Reign of Fire" featured a Britain where survivors lived underground and moved surreptitiously). Unfortunately, the filmmakers don't give enough weight to their rage concept and it quickly falls to the wayside, with its 'infecteds' acting more like single-minded marauders than rage-induced monsters. Screenwriter Alex Garland ("The Beach") also stumbles over a couple of key plot points. In a minor one, Jim and Selena find Frank and Hannah due to a string of blinking Christmas lights strung over their balcony in a city with no electricity (the filmmakers had to film day for night because it was too difficult to eradicate the glow of street lamps, yet let this one get by?). A more significant problem arises from an early statement that rumor has it that the virus had spread to Paris and New York. The second act pretty much hinges on the truth or fallacy of this statement, but common sense would immediately challenge it. The ensemble is nicely cast with Murphy and Harris creating a credible emotional bond from their opposing initial perspectives. Most poignant is Gleesan, who cloaks his character in boisterous bravado to protect his daughter from the terror they all feel. Eccleston is slightly imperious officiousness, and, too their credit, West's soldiers are distinguishable, with Stuart McQuarrie and Luke Mably particularly notable. It is Dod Mantle's visuals and Boyle's direction that are "28 Days Later's" greatest asset. After a kinetic opening, Dod Mantle's camera rests on a beautiful closeup of Jim's eye, all feathery lashes and facial peach fuzz, a richly textural shot. After the odd realization that hordes of rats are running from humans, we see their approaching shadows on the wall of an underground tunnel. Twice Boyle and Dod Mantle stun with overhead shots. In a city without water, we're shown the vast panorama of an apartment building's rooftop covered in every type of container imaginable left to capture non- existent raindrops. The second is a heart stopper, when a crow shown from below is revealed to be far more than an annoyance when the camera hovers over it.