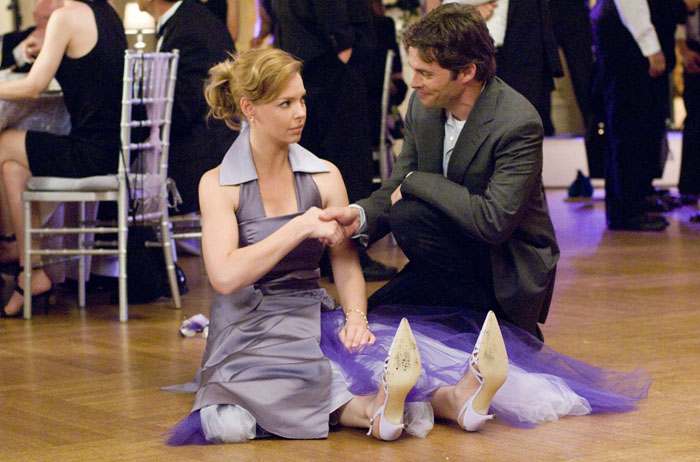 Always a bridesmaid (albeit a darn good one) but never a bride, Jane (Katherine Heigl) has a closet full of dresses from all of the weddings she was instrumental, through her kind deeds of friendship, in making happen. When the wedding beat writer for the New York Journal, Kevin (James Marsden), spots her ‘maiding at two different nuptials at the same time, he sees a story in the pretty young woman and her “27 Dresses.”

From the start, you can see the manufacture in director Anne Fletcher’s sophomore outing as we watch Jane ferry back and forth between two of her friends weddings, including wardrobe changes in the back of a cab. Her unbound enthusiasm to help make their special day, um, special is trite and unbelievable (like much of the film’s clichéd story by Aline Brosh McKenna) but Katherine Heigl gives the opening a bit of credence. This is the kind of film that takes for granted that you would believe that someone as pretty, smart, funny and together as Jane would: a) actually bridesmaid 27 times, b) not say no to her conniving, selfish sister, Tess (Malin Akerman), c) harbor a long time unrequited, schoolgirl-like crush on her boss, George (Ed Burns), and d) not fall, immediately, for drop dead gorgeous and charming Kevin. You have to suspend a lot of disbelief for “27 Dresses” to work, which it sometimes does on the strength of Heigl’s on-screen presence. The actress transitioned from the small screen as “Grey’s Anatomy’s” It girl to big screen stardom with her debut in last year’s wildly successful “Knocked Up.” Her handlers, unfortunately, play it safe with their investment and her follow up thesping job is routine, predictable and uses just about every romantic comedy cliché in the book. However, there is some creativity hidden in the derivativeness of “27 Dresses.” One thing that drives me crazy is when a comedy rolls out the almost mandatory fashion show montage. Used in movies for eons – from “European Vacation” to Clueless” – this device has always made me cringe because of the utter lack of imagination. Surprise! The best things about “27 Dresses” are the titular garments and the way they are used in the fashion montage. Here is one time where the cliché actually works with Jane modeling all of the bridesmaid gowns – beautifully, hideously and hilariously designed by Catherine Marie Thomas – for Kevin. Alas, the rest of the film is inert. Katherine Heigl may be headed for superstardom but she needs to make better choices with future material. She is, though, eminently likable here. James Marsden does serviceable work as handsome Kevin, turning up the wattage any time he smiles, which is frequently. Ed Burns is two-dimensional and clueless as the object of Jane’s secret obsession. It makes no sense that he would fall, without a heck of a lot thought, for Tess and ask her to marry him without getting to know her. Malin Akerman is pretty, yes, but Tess’s uncaring selfishness makes her an unlikable character. Judy Greer, as Jane’s friend and muse, has to work hard for laughs and is underutilized. Techs are professional but costumer Thomas steals the show. Katherine Heigl is charming and does have palpable screen presence. I wish her well and hope she makes better choices in the future. “27 Dresses” is little more than a dolled up mannequin.