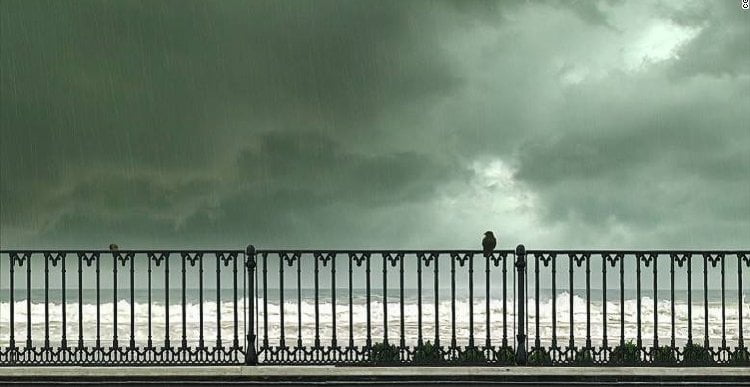 In 2016, we lost a world class filmmaker with the passing of Iran's Abbas Kiarostami ("The Wind Will Carry Us," "Certified Copy"). In the three years before his death, he worked on what would become his last film, a marriage of his love for still photography and movie making originally conceived when he noted that a painting only shows an instant in time, leaving us to ponder what happened immediately before and afterwards. Jumping off from that idea, Kiarostami took one famous painting, Pieter Bruegel the Elder's 'The Hunters in the Snow,' and twenty-three of his own photographs and digitally animated them into four and a half minute films, imagining events not captured in his original "24 Frames."

Kiarostami actually began with more and had whittled his options down to 30, leaving his son Ahmad to chose the final 24 that would match his chosen title. Almost all of them are mesmerizing in one way or another, evoking entirely different emotions even in very similar scenes. Continuing themes of snow and tides populated with birds (including two combative crows who make multiple appearances), horses, cows, wolves and deer give us a perception of the author's soul, the types of images which moved him. They make us slow down to observe the small miracles found in the seemingly ordinary.

There is an interconnectedness among some of them, like the way we can surmise Frame 5 portrays a parallel scene to Frame 4 by the sound of a gunshot. In one, we are anxious, a young cow lying on sand seeming uninterested or unable to react to the incoming tide. We see that same cow later in a different environment, similarly disinterested in what is happening around it, but the effect is amusing. A scene of wolves in a snowy landscape recalls Frame 1's painting in its composition, the tree in its center the very model of naive folk art. Only one photograph features people, a static grouping at a bridge observing the Eiffel Tower as passers by and a busker wonder through the frame.

"24 Frames" is a unique gift, a final meditation from a truly great filmmaker.

Take a single picture and build a four and a half minute film of what goes on before and after that single frame. The late Iranian director Abbas Kiarostami, in his last film, uses this device to reflect his meditations in “24 Frames.”

It was with a tinge of sadness as I watched Kiarostami’s final, three years in the making film that is a deft combination of still photography, video imagery and CGI technology. The resulting oeuvre is a series of short films imagined from individual pictures that is both fascinating and mesmerizing.

With the exception of the first short film, which uses a classical painting – Pieter Brueghel the Elder’s “Hunters in the Snow” – as its inspiration, the remaining 23 shorts are based on the director’s own photographs. The theme through most of these thoughtful meditations is the harshness of mother-nature and the wild creatures that survive in her realm. We see crows, seagulls, pigeons, deer, cow and caribou, and occasionally some humans, in snowstorms, rain storms, and thunder storms, as seen by Kiarostami’s artist’s eye.

Unfortunately, most filmgoers are not likely to seek out what is a film of one man’s reflections on nature and life. Mostly, nothing goes on in each little film, except a lot actually happens. Somehow, the auteur draws you in to his work in varying degrees and, each time, you invest your interest and emotions.