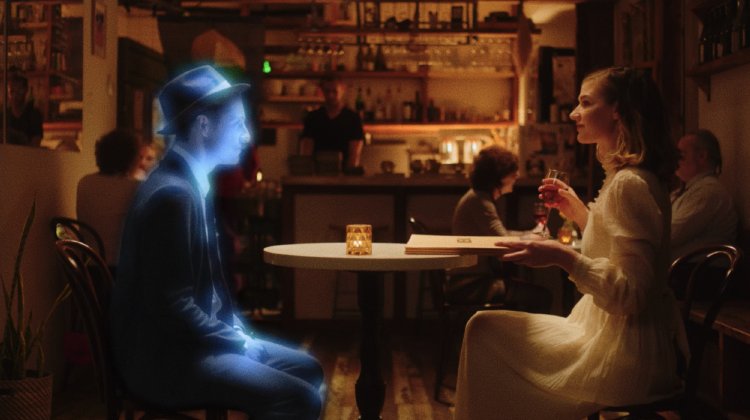 In the year 2035, taxman James Preble (Kentucker Audley, “She Dies Tomorrow”) has no idea how compromised his dreams are until he goes to audit Bella Isadora (Penny Fuller), whose analog world was outlawed by the surveillance state he serves years ago.  As he catalogs her videotaped dreams, he falls in love with the younger version (Grace Glowicki) of the woman who lives in the “Strawberry Mansion.”

Federico Fellini said that movies use the language of dreams, something writer/directors Albert Birney & Kentucker Audley seem to have taken quite literally.  This trippy travel through time and space and dreams is like “Eternal Sunshine of the Spotless Mind” by way of “Alice in Wonderland” with the artsy craftsy production style of the “Be Kind Rewind” crew.  This family affair (Albert Birney is the nephew of Reed Birney, who stars as Bella’s estranged son Peter, and whose son Ephraim plays Peter’s son Brian) must have been a blast for all involved, but the resulting film will not be to all tastes, its whimsy working better in its second half than its first.

Maybe we need to get our sea legs before we actually set sail, as Preble will in search of Bella with Richard Rat (Shannon Heartwood) and Marcus Rat (Matt Heartwood) as his crew, as Preble’s audit, while revelatory in certain ways, isn’t as much fun as his escape from it.  While we learn the current assessment of a dreamt injured buffalo and see Bella’s dad rise from the grave as a stop motion skeleton, things get more interesting when the woman who wanted to share her dreams finds him there.  Buddy (Linas Phillips, “Manson Family Vacation”), the ubiquitous salesman who haunts Preble’s nightmares hawking Captain Kelly’s Fried Chicken buckets, is vanquished. During the film’s tense climax, Preble heroically saves Bella’s turtle Sugarbaby (Peanutbutter).  Best of all is how the filmmakers loop that critical moment back to Bella’s odd request when she initially opened her front door.

“Strawberry Mansion” is like a pop up children’s book come to life.  Just go with its flow and what at first appears illogical whimsy all falls into place.

I have been looking around at reviews of co-writers/co-directors Kentucker Audley and Albert Binney collaboration (both also “star”) and they run from the sublime (10/10s) to the ridiculous (1/10s). Both ratings are extreme and, both, not warranted as the movie falls somewhere in between.

What is “Strawberry Mansion”? Well, it is a sci-fi future world where dreams are recorded and taxed – a really high tech concept even in 2022. This technology is paired with the mundane bureaucratic world where a human person, working for the government, must come to your home and audit your dreams (like the IRS audits our income taxes). The public is legally liable to pay the dream tax the audit discovers.

The filmmakers (and co-stars) humorously mix the Big Brother technology, including dream product placement, with a vintage retro feel as our stalwart John Preble will do whatever it takes to get the job done. There is a lot of sleight of hand in use as illogical tracks are covered with the caveat that it is all about dreams. This gives the Audley/Binney team a great deal of creative license with designs to screw with your (and their, I think) heads.

I give these guys (and their talented tiny cast) kudos for their low-budget creativity with unique production design and a surreal vibe that will please sci-fi fans. I do not know where these folk came from but I look forward to where they are going. Be warned: “Strawberry Mansion” is a weird little movie that folks may, as the review ratings indicate, love it or hate it. I fall in the middle with a positive overall view.