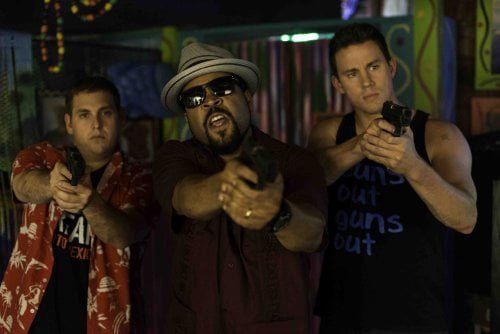 As rookie cops Schmidt (Jonah Hill) and Jenko (Channing Tatum) successfully broke a high school drug ring, Deputy Chief Hardy (Nick Offerman) wants them 'to do the same thing as the last time' as he doles out their next assignment at MC State (McState, get it?), reporting to Captain Dickson (Ice Cube) at his new digs at "22 Jump Street."

What is this - "The China Syndrome?" Granted, name checking Tracy Morgan and Maya Angelou isn't as cataclysmic as Three Mile Island, but the hat trick is scored early as Jenko berates someone for using the gay 'f' word. That oddity aside, here's a sequel which may just be funnier than the original, largely due to Tatum's higher comfort level in his comedic skin. From its 'Previously on...' opening recap through its hilarious closing credit push for the animated series, video game and sequels which move their address up through 40, this meta in joke has the good sense to keep its audience in on it. Even before the dynamic duo starts riffing on Dickson's 'cube of ice,' we've noted that next door at 23 Jump, condominiums are 'coming soon.' And yes, every beat from the first film is hit in the second, except this time around it's Jenko who falls in with the popular crowd by joining the football team while Schmidt moons about with the artsy types. But even though Schmidt has the luck to hook up with Maya (Amber Stevens, "The Amazing Spider-Man"), he's beside himself that Jenko now appears to prefer spending time with QB Zook (Wyatt Russell, "Cold in July"). Not only that, but Jenko appears to dismiss the fact that Zook's unusual tattoo is the only identifying clue they have to trace the source of the Whyphy drug that's already claimed the life of one student. As sequels are expected to be bigger, "22" starts off with our lads mimicking gang members (Tatum's attempt to follow Hill's lead is inspired), only to have their cover blown inside an eighteen wheeler. As Jenko climbs to its top, Schmidt ends up hung over its side and when he's finally upright, snags them both on an overpass. Big opening stunts accomplished, the two set themselves up in their dorm room and begin to adapt to college life. On their very first night, Schmidt chats up Maya and ends up in a poetry slam for his efforts (Hill does a riff on Mike Myers' routine from "So I Married an Axe Murderer"). Writers Michael Bacall ("21 Jump Street"), Oren Uziel and Rodney Rothman ("Grudge Match") keep the self aware jokes flying while pushing the bromance to the 'needing space' stage. Discussion on the investigation is often a double entendre for Schmidt and Jenko's relationship. Visual jokes abound as well - note the name of the Film Studies Center, for example, an apt backdrop for a football helmet car chase scene. Directors Phil Lord & Christopher Miller ("21 Jump Street," "The Lego Movie") top their opener with a Spring Break climax that has Tatum and Hill performing even more precarious stunt work. Hill and Tatum are a great team and Tatum's looser here, giddily capitalizing on his dance abilities in this movie's drug trip. Ice Cube is even angrier, melting down when he turns up in an unexpected role. Riggles and Franco make an early appearance as jailed consultants. Comedians The Lucas Brothers, identical twins, provide an amusing parallel to the mismatched set across the dorm hall. Jillian Bell ("The Master") makes the deadpan put down an art form as Maya's hostile roommate Mercedes. There are also a couple of surprises within the cast that further the movie's self referential jabs. "22 Jump Street" goes so whole hog on taking the piss out of the Hollywood franchise, it appears to have intentionally painted itself into a corner. These guys know how to quit while they're ahead.