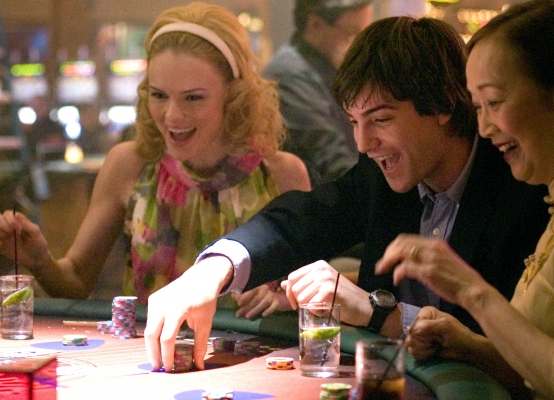 Ben Campbell (Jim Sturgess, "Across the Universe," "The Other Boleyn Girl") is an insanely gifted M.I.T. student without a lot of money. His dream of attending Harvard Med is absolutely dependent on him writing a dazzling essay to win the coveted Robinson scholarship, but Ben hasn't led a very exciting life. When he's approached by his math professor, Micky Rosa (Kevin Spacey, "Superman Returns," "Fred Clause") to join an elite squad of students that count cards in Vegas, he rejects the idea until one of those students, Jill Taylor (Kate Bosworth, "Superman Returns"), who he's admired from afar, convinces him he can raise $300K to make Harvard Med a sure thing by playing "21."

'Inspired by' true events and adapted from the bestseller "Bringing Down the House: The Inside Story of Six M.I.T. Students Who Took Vegas for Millions" by Ben Mezrich, who recently came into question in Boston Magazine article 'Ben Mezrich: Based on a True Story,' "21" is a glitzy piece of mainstream entertainment that showcases the chutzpah if not the utter veracity of some young fish outmaneuvering sharks in a big pond. Director Robert Luketic ("Legally Blonde," "Monster-in-Law") has aimed for a "Casino" 90210 style that works until its third act revenge story takes it beyond the realms of belief. Ben is introduced as a geeky guy celebrating his twenty-first birthday (nudge, nudge, wink, wink) with best buddies Miles (Josh Gad, TV's "Back to You") and Cam (Sam Golzari, "American Dreamz") at Boston's Doyle's Tavern where his blue collar mom Ellen (Helen Carey, "Little Children") works. The threesome are completely obsessed with winning a school sponsored robotics competition and Ben is proud to have recently been made Assistant Manager at a Harvard men's clothing shop. When Ben's intelligence is duly noted by his math professor (whom screenwriters Peter Steinfeld ("Be Cool") and Allan Loeb ("Things We Lost in the Fire") name like a member of the mob - everything wrong with "21" points toward this character), he is summoned to a secret meeting where he is stunned to discover Jill Taylor counts cards in Vegas. She reels him in and he is taught how to count cards (-1 for face cards, +1 for low cards, 0 for the middle) and signal. The group uses a team approach - one player counts placing low bets until the deck is stacked in their favor, then crosses hands behind back to draw the high roller who will bet big amounts and score. The current count is relayed using code words like 'sweet' for 16, 'magazine' for 17 and a player is warned off the table by a spotter with a hand run through hair. Most importantly, Rosa insists that they never gamble - this is the business of counting cards only. These words, of course, foreshadow both the meltdown of teammate Fisher (Jacob Pitts, "EuroTrip"), who, jealous of Ben's top dog status, acts ridiculously out of character calling the attention of casino guards, and Ben himself, high on the assorted high rolling personas he's adopted. Ben is now the target of both old guard casino enforcer Cole Williams (Laurence Fishburne, "Mission: Impossible III") and Micky himself while his buddies back home have grown disgusted with his mysterious behavior. Brit Sturgess is quite good in the role of Ben, who, along with Aaron Yoo ("Disturbia") and Liza Lapira (SHOtime's "Huff") make up the most believable of the students turned card sharks. Bosworth is the screenwritten love interest who's just a little too glamorous as an M.I.T. student, let alone her exotic Vegas disguises (costume designer Luca Mosca is more successful transforming Ben from one extreme to the other). Spacey flips the switch between snake oil salesman and hardass. Gad and Golzari make for good, mensch-y sidekicks. The central character of the real story, Jeff Ma, cameos as a Planet Hollywood dealer, and he's criticized aspects of the original book, particularly the prominence of the unifying professor, but the screenplay adaptation blows this aspect out of all proportion, taking us out of the film in the end. That's unfortunate, because the casino stuff can be both dazzling (flashy, tight table shots, techno score) and informative (Cole's subplot about being phased out of the biz by technology, the counting system). The production design makes a real contrast of the bright neons of Las Vegas and the cold, wintery Ivy League Boston locales (Boston University subs for M.I.T.). Director Luketic may have let Las Vegas glitz go to his head with an adaptation which would have benefited from some toning down, but anyone who's paused an hour or two to watch one of the many poker shows on TV should have a good time with "21."