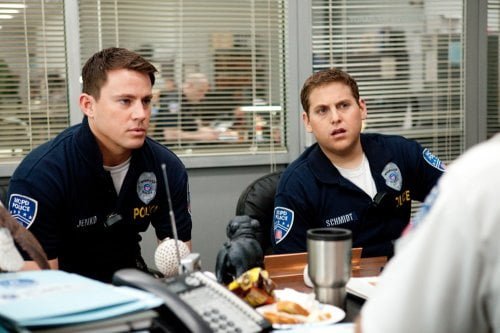 When they were in high school, Schmidt (Jonah Hill) and Jenko (Channing Tatum) didn't get along. Now friends after graduating from Police Academy, they're about to get a new education on what it means to be a teenager when they're recruited into Captain Dickson's (Ice Cube) secret undercover squad at "21 Jump Street."

Jonah Hill may not have had the most original idea - turn an 80's television series into a comedic take on itself - but he had the right one and pairing him with Channing Tatum, who I'm predicting will achieve full fledged movie stardom this year, was gilding the lily. "21 Jump Street" is a ridiculous amount of fun when screenwriter Michael Bacall (of the loathsome "Project X") isn't confusing crassness with comedy. Even if some of the dick jokes work, I for one, didn't need to see a man pick up his blown off one in his teeth. But Bacall also knows how to subvert genre cliches, a talent which serves him well here, and considering some of the film's weaker attempts at humor, the bromantic aspects of this buddy movie are genuinely funny instead of queasily homophobic. The film sets up our stars' back stories with a prologue that finds 'Not Quite Slim Shady' (Schmidt, wearing braces and capped with a platinum Caesar cut) being shut down for the prom as Jenko laughs from the sidelines. Skip to them discovering their badassery graduating from Police Academy right before we find them in shorts and bike helmets on park duty. "Cloudy with a Chance of Meatballs" directors Phil Lord & Chris Miller know from pacing and how to get a laugh with visual juxtapositions. Unfortunately, the boys blow their first big opportunity to prove themselves when Jenko fluffs reading biker drug dealer Domingo (DeRay Davis, "Jumping the Broom") his Miranda Rights. They're called to the carpet by Deputy Chief Hardy (Nick Offerman, TV's 'Parks and Recreation') who gives them a nudge-wink speech about his cancelled program from the 80's and reassigns them to Jump Street. In an old abandoned Church, Ice Cube's Captain Dickson gives reasons for being an 'Angry Black Captain' and insists they get chummy with the dealers to get to the source of a major high school drug ring. As part of their cover, the new 'brothers' move into Schmidt's parents' (Caroline Aaron, "Edward Scissorhands" and Joe Chrest), but when they're caught with expired hall passes by gym teacher Mr. Walters (Rob Riggle, "Big Miracle"), it's Schmidt's turn to freeze and their undercover identities are swapped. Now, Schmidt is 'Doug McQuade," jock, and Jenko's brother Brad the geek. Besides being of the moment with its drug lab teachers, "21 Jump Street" shows smarts in contrasting changing coolness quotients over a generation. Everything that worked for Jenko in high school blows up in his face on day one at school, fast tracking the guys on Principal Dadier (Jake M. Johnson, TV's 'New Girl') three strikes list. Then Jenko suffers watching his geeky partner get in with the in crowd, including 'Green' drug dealer Eric (Dave 'brother of James' Franco) and his sometime girlfriend Molly (Brie Larson, 'Rampart') while he hangs with chemistry genius Zack (Dax Flame, "Project X's" trench-coated cameraman). Undercover cop movie cliches are turned on their heads - two car chases in amusingly inappropriate vehicles, the 'You're in too deep' speech and one undercover group foiling another at the climax - and running gags are well integrated, especially the 'four stages' of the unnamed drug's use, hilariously demonstrated in a youtube video by Johnny Simmons ("Hotel for Dogs"), later crosscut between Schmidt's audition for Peter Pan and Jenko at band practice, both under the influence. This last montage exemplifies the talents of its costars. As he already proved in "Moneyball," Hill is more than just an overweight funny guy - there's something really going on in there to so nail the 'impressive for an oddball amateur' awkwardness of an audition for a sexless character (as drama teacher Mr. Gordon, 'Suburgatory's Chris Parnell deliver priceless coaching). Tatum possesses an innate sweetness that's worked in prior roles like "She's the Man" and "The Vow," but he's more than the nice dumb hunk as well, as he ekes out his character's budding quest for knowledge (he has a scene as potassium chloride!) and unabashedly nails the most outrageous physical comedy. As good as "21 Jump Street" has turned out to be, though, it could have been better had its makers not resorted to so many lazy grabs for laughs. Everyone involved worked hard enough for the well earned ones. It ends wide open for a college-set sequel, which could very well be another of "Jump Street's" self aware jokes. Stick through the closing credits for more 'Korean Jesus' and Ms. Griggs (Ellie Kemper, "Bridesmaids") fulfilling her unseemly desires.