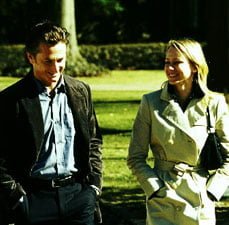 Sophomore helmer Alejandro Gonzalez Inarritu made a tremendous impact with his first film, the multi-threaded drama “Amores Peros,” showing his skills as both a filmmaker and storyteller. Now, with Guillermo Arriaga Jordan’s screenplay, the director adds another layer to his filmmaking maturity with “21 Grams.”

A man (Sean Penn, "Mystic River") quietly smokes and regards his lover's (Naomi Watts, "The Ring") bare back. Heavily tattooed ex-con Jack (Benicio Del Toro, "The Hunted") tries to get through to a rebellious kid at a Catholic center. Scenes like scattered shards of glass slowly come together as three unlikely people are linked by a car accident that took three lives in "21 Grams." Director Alejandro González Iñárritu and his screenwriter Guillermo Arriaga Jordan repeat the "Amores Perros" outline of a car accident linking three different stories, but in "21 Grams" those stories converge as its trinity share enough body and blood for a half dozen Catholic Masses. Mary (Charlotte Gainsbourg, "My Wife Is an Actress") implores a fertility doctor to help her get pregnant by her husband Paul (Penn), a professor with one month to live. As in "The Hours," two women prepare for parties that will derail with one tragedy. Christina (Watts) receives a call and rushes to the hospital to learn she's lost her husband and two daughters while an excited Mary wakes up Paul for the heart transplant that will save his life. Jack, his faith in God delivered a fatal blow, tells wife Marianne (Melissa Leo, "The 24 Hour Woman") that he hit a man and two kids. As his birthday party proceeds inside, Marianne tearfully washes his truck of blood even as Jack decides he must turn himself in. Paul makes the painful decision that his marriage is over and begins to watch over Christina, having illicitly obtained his donor information. Christina is falling into an old pattern of booze and drugs, but she responds to Paul and a tentative romance begins. When Paul tells her about his heart transplant (shades of "Return to Me," albeit not exactly romantic and decidedly not comedic), Christina becomes enraged and focuses her anger on the crime's perpetrator, Jack. Paul agrees to help Christina track down Jack, who has left his family for a solitary life working in a remote area. Arriaga wrote "21 Grams" (which refers to the amount of body weight a person loses at the time of death) in the pixilated sequence presented on screen. The seemingly random flashes of three non-sequential stories give the film an air of mystery and give the characters added depth when we're forced to seek motivations for actions presented before their history is revealed. The fatal accident is deftly handled. Christina's husband Michael (Danny Huston, "Timecode") leaves her a message from his cell phone just before warning daughters Laura and Katie to stay close. We see Christina replay this his last words repeatedly. Then we see the scene play out. Michael nods to a man blowing leaves and the camera stays on this man, the leaf blower almost obscuring the sound of Jack's truck hitting the family off screen. The film becomes problematic, though, with Christina's vengeance, for an overwrought and sordid (probably meant as a representation of hell on the way to redemption) 'third act.' When Christina is asked by her sister Claudia (Clea DuVall, "Identity") if she will attend the trial, she asks what is the use if her family will still be dead. It is difficult to believe that this upper middle class soccer mom would descend into an existence of drugs snorted in club bathrooms and liquor drunk from paper-bagged pints (prior behavior is barely alluded to). Her sudden blood lust and Paul's actions leading up to the film's denouement take on an air of hysteria. Still Arriaga and Iñárritu startle with an unexpected maneuver allowing Paul to save Christina in a way that neatly dovetails into the film's themes. The three actors cannot be faulted and should all be remembered at award time. Penn is utterly believable as a man minutes from death, even if his vocation as a math professor seems arbitrary. Health returned, his tenderness towards Christina is very real. Watts is grief personified, struggling to life with Paul even as she pummels her rage against him. Best is Del Toro, the ex-con who finds redemption more grueling when the faith he denies forces him to do the right thing. Cinematographer Rodrigo Prieto ("Amores Perros") retains the gritty, desaturated look which is on the verge of becoming a cliche. Still, the style serves the fragmented nature of the story well, fed to us like old memories. One shot, of black bird silhouettes rising up against a red, white and blue sky is particularly memorable. "21 Grams" is an emotionally wrenching, downer of a film, but it achieves a ray of hope as the tiny weight that leaves one of its characters finds rest in another.

The lives of three people come together in this tale that not only follows the lives of the principles, it flashes back and forth through each story in a complex, yet perfectly clear and understandable way. The film begins, we soon learn, near the story’s end as we meet a ravaged Paul (Sean Penn) in a state of emotional crisis as Chris (Naomi Watt) sleeps by his side. Then the story, and reason for Paul’s ravaged physical and mental state, starts to unfold. We meet Jack (Benicio Del Toro), an ex-con who has found Jesus and wants to follow the straight and narrow. Paul is in a bad state of health, in need of a new heart and married to a woman (Charlotte Gainsbourg) who is desperate to have his baby. Chris is happily married with a loving husband and two beautiful little girls. That is, until the day tragedy strikes and she learns that her beloved family was struck down by a hit and run driver. None of the three survive. Paul gets a new heart but also learns that his wife, Mary, has a dark secret. Years before, she secretly had an abortion of his baby. The couple soon split and Paul becomes obsessed with learning the identity of who his heart came from, hiring a private eye for the job. He soon finds out about Chris and her sorrow and begins to follow her, first from afar but always circling closer. Meanwhile, Jack arrives home in a panic. He tells his wife, Marianne (Melissa Leo), that he hit someone and left the scene in a panic. Resourceful Marianne immediately tries to calm Jack and clean up any evidence of the mishap but even a stint in prison for another crime do nothing to assuage his guilt over taking innocent lives. Chris is overwhelmed by the need for vengeance and enlists Paul with her plans. Jack, equally, needs redemption for his crime. The paths of these three people are about to cross. Inarritu displays a very deft hand, with his screenwriter, in weaving a complex tale that jumps back and forth through the lives of the three protagonists. The ability to keep the multiplicity of stories and the interconnected timelines as focused as he does gives firm belief that we have a filmmaker well on the road to greatness. The key actors in “21 Grams” are uniformly first-rate with Sean Penn running the gamut from being the picture of health to a man ravaged be a failing heart. Benicio del Toro is a terrific presence always and is truly fine as a man who believes he has found his life’s true path but loses it in a horrible moment. Naomi Watt is proving to be an acting force, given the right role, and tears your heart out, at times, as the grieving Chris. The changes in behavior that Chris goes through, from the picture perfect suburban housewife to boozing druggie with a past, is a bit too pat. It isn’t clear if her marriage saved her from a depraved life or what. The suddenness of her change is not fully explained and I could just speculate. Other than this, “21 Grams” is a solid second time at bat for Alejandro Gonzalez Inarritu and a good teaming of fine actors.