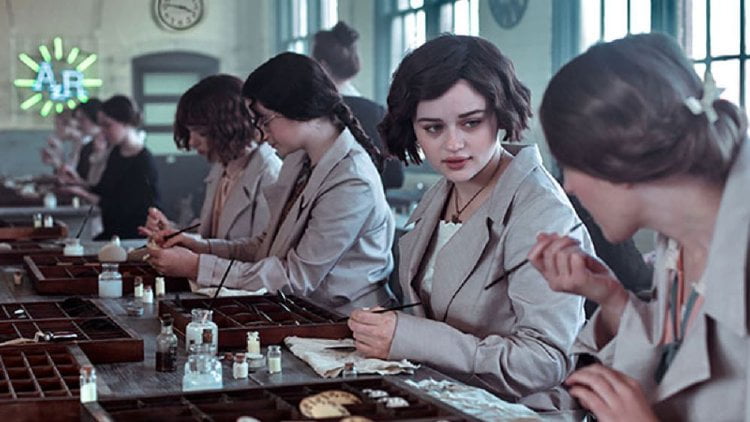 Bessie Cavallo (Joey King, "Ramona and Beezus," "The Conjuring") is proud when her older sister Jo (Abby Quinn, "Shithouse") wins a prize from American Radium owner Mr. Roeder (John Bedford Lloyd) for having painted the most watch dials that month, even as she herself is docked pay by supervisor Mr. Leech (Scott Shepherd, "Bridge of Spies") for the shoddy work she turns out because she doesn’t lick her brush tip to a fine point.  When her sister falls ill and begins to lose her teeth, then pieces of her jaw, Bessie will learn that her failure to ingest the paint is what saved her from a similar fate in “Radium Girls.”

Directed by "A Call to Spy's" Lydia Dean Pilcher along with Ginny Mohler, who also cowrote with Brittany Shaw, this semi-fictionalized account of 1920’s corporate malfeasance is a real MAGA movie, a testament to what happens when industries are unregulated and profits are prioritized over people.  While the Cavallo sisters and American Radium are composites of actual people and one of the three businesses which allowed its female workers to become poisoned, the lawsuit which followed, Dr. Katherine Drinker (Veanne Cox) and activist Wiley Stephens (Cara Seymour, “American Psycho”) are real.  Also true is that the radium dial painting companies not only knew they were endangering their workers, but tried to smear those afflicted with diagnoses of syphilis.

The film opens with a snake oil salesman of the time promoting radium as ‘liquid sunshine,’ before we are introduced to the Cavallo sisters and their friends, who so enjoy their access to this faddish fluid, they use it to paint their faces and nails to glow in the dark after hours.  That’s also when, slipping into Mr. Leach’s office, Bessie is dismayed to find a picture of her deceased older sister Mary, whose diaries she has recently found and is reading.  When she enters the bathroom despite Jo’s protests and finds her sister in the bath, her mouth bloody and one of her teeth resting on the tub’s rim, Bessie recalls reading that Leach warned Mary against licking the tip of her paintbrush.  The next morning she stops Roeder and asks for a doctor to be sent for her sister, who is also suffering severe joint pain.  Company man Dr. Flint (Neal Huff, "Split") visits and declares Jo as fit as a horse, but is pressed to conduct tests.  These, he will tell them, result in a diagnosis of syphilis despite Jo’s protestations that her status as a virgin makes this impossible.

Quinn is riveting as the older, more well read sister Jo, a doomed romantic heroine of high order.  It is horrific to watch her deteriorate before our eyes, the filmmakers utilizing just enough gore to emphasize radium’s devastating consequences.  In nicely written contrast, King’s Bessie is less educated, more in tune with the pop culture of the time, providing her a nice character arc as she is transformed into an activist.   The film’s weak point is in bridging that gap, done via the character of Walt (Collin Kelly-Sordelet), a romantic interest who introduces Bessie to the local Communist Party before promptly fading into the background.  Walt’s friends, a Black couple whose race is never commented upon in 1925, Thomas (Brandon Gill) and photographer Etta (Susan Heyward), pave the way for the filmmakers to offer historical montages about all manner of issues including unions that all have the air of recreations made for the History Channel.  The production soars higher when concentrating on the watch dial factory floor or the girls at home, nicely incorporating hints of the Egyptian craze which was ongoing at the time.

That bridging wobble also introduces Bessie to and the Consumer Leagues' Wiley Stephens (Cara Seymour, "American Psycho," SHO's 'The Knick'), who convinces her to allow her sister’s corpse to be exhumed.  We are told several times that the graves of these workers will emit radiation for a thousand years, and Mary’s is indeed the one which allows them to begin to build their case.    The resultant trial is no slam dunk, the writers giving their fictional heroine a lesson in unfathomable betrayal before the truth is laid bare.

With women dominating both before and behind the camera (Lily Tomlin and her partner Jane Wagner are producers), “Radium Girls” illustrates what can be accomplished when women champion their own.

The 1920s was a turning point for American workers’ rights and one small group of female factory workers at US Radium advocated for safer conditions when they begin to fall ill. The reason for the unknown illness was the radioactive paint used by the women on luminous watch faces resulting in the poisoning of the “Radium Girls.”

Kudos to the mostly femme collection of filmmakers, helmed by Lydia Dean Pilcher and Ginny Mohler, who saw fit to tell a story of both social and medical significance – about women, not the men who were responsible for the Radium Girls’ plight in the first place.

US Radium began the practice of painting the numbers and dials on watch faces using a concoction of powdered radium and water with a technique called “lip, dip, paint.” The idea was to make the brush point as sharp as possible by using the lips before painting the dial. The workers were assured that the radioactive paint was harmless and many of the young women workers even used the luminous and poisonous paint on their eyes, lips and finger nails.

The story of this health scandal focuses primarily on two of the workers – Bessie (Joey King) and Josephine (Abby Quinn). When Josephine starts showing unusual symptoms, a company doctor examines her and concludes she suffers from syphilis, denying the evidence to the contrary – “radium jaw,” losing teeth and severe anemia. But, when more women workers fall ill, they decide to sue.

The film is divided into two fairly equal parts with the first half building the case against US Radium. It shows, in stomach-churning detail, how the woman, using the poisonous paint for adornment, innocently caused their own health problems and deaths. It takes the plaintiffs’ years to find a lawyer willing to represent them against a powerful company with deep pockets to fight litigation. But, they persevered.

The second half of “Radium Girls” follows the long fight these women endured to get justice. Cara Seymour, as women’s rights advocate Wiley Stephens, represents the good guys in the lawsuit that took a decade to resolve – in favor of the plaintiffs. The real justice in their fight was to make history in both health and labor rights. It is a little-mentioned part of our history and I am glad the story is told.

Reeling's reviews will be published on 10/19/20, week of the film's release.  Click here for playdates.