The 2022 Oscar nominated shorts contain a raft of international selections, a welcome and growing trend within the Academy.  It is surprising to find no U.S. entry in animation, a category once dominated by Disney and Pixar, and only one U.S. entry in live action.  Documentaries flip the script with four entries from the U.S. and one from Afghanistan.  And beware those animations as only one, Aardman’s “Robin, Robin,” is child friendly – all other selections contain nudity, two feature animal cruelty and one even torture and bestiality.  The animations are also the strongest group across the board. 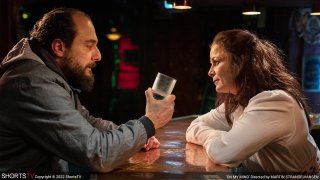 Denmark’s “On My Mind” is a lesson on empathy.  A sympathetic barmaid serves a healthy whiskey to a man with little money as her boss sits at a table working on his accounting.  He will become hostile to the man’s insistent request on singing a karaoke song, but Willie Nelson’s ‘Always on My Mind’ has never been so poignant in this tale which takes a ghostly turn.  The USA’s “Please Hold” is a clever 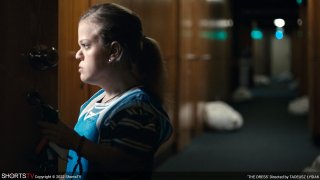 and funny Kafkaesque science fiction about a man arrested by a drone while simply going to work. Switzerland’s “Ala Kachuu – Take and Run” Sezim, a nineteen year-old student with dreams, represents the plight of women in Kyrgyzstan forced into marriages against their will.  The film implies danger early on where there is none, then surprises with the source of Sezim’s actual enslavement.  Riz Ahmed stars in the UK’s “The Long Goodbye,” a companion piece of sorts to the actor’s feature “Mogul Mowgli.”  A chaotic day within a household preparing for a wedding descends into horror when murderous fascists storm the neighborhood, a strong contender for the Oscar.  Poland’s “The Dress” features a moving performance from Anna Dzieduszycka as a virginal yet sensual and lusty motel cleaner whose desires are degraded by a handsome truck driver. 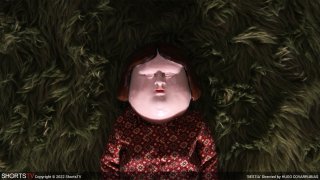 If the folks who selected these nominees had selected the International nominees, France’s “Titane” would have been a shoo-in.  And yet, while the subject matter ranges from the weird obsessions of a trio of siblings to a based on truth tale of a Chilean torturer and her disturbing relationship with her German Shepherd, every entry here is exceptional.  Aardman’s “Robin, Robin” is a sweet stop motion tale of a klutzy robin raised by mice who pairs up with a magpie to steal the star atop a Christmas tree, the 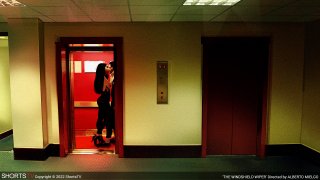 likeliest winner because of its broadest appeal.  “Affairs of the Art” is a shimmering, delightfully weird 2D animation whose narrator, an aspiring artist, regales us with tales of her really strange sister Bev, obsessed with insects, dead bodies and taxidermy.  Chile’s “Bestia” introduces us to Ingrid Olderöck, the most powerful woman in Pinochet's military police, was raised in a Nazi worshipping household and became known for her sick, sexual use of German Shepherds.  This stop motion animation utilizes figures with porcelain heads, a chilly effect, and is a powerfully disturbing, dialogue free nominee.  There is only one word spoken (dumbass) in Russia’s “BoxBallet,” another stylish 2D animation featuring a beat up brutish boxer’s attempts to woo a lithesome ballerina.  Spain’s experimental “The Windshield Wiper” features a man smoking in a café contemplating the meaning of love, a jumping off point to observe a couple on a beach, a side-by-side right-swipe match-up that goes unheeded in a grocery store and a drunken homeless man’s obsession with a storefront mannequin, each segment employing a different form of animation.  All are worthy, but those middle three made the most lasting impressions. 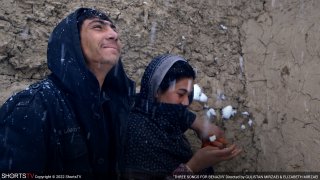 Another Oscar trend of late has been featuring the hearing impaired in feature films like “Sound of Metal” and this year’s “CODA.”  “Audible” is the double entendre title about the Maryland School for the Deaf’s football team as its seniors face losing one of their own to suicide, defending its amazing winning streak of over forty games and leaving an environment tailored towards their needs for the outside world as seen mostly through the eyes of Amaree, a charismatic player.  I’d champion this nominee, which easily could 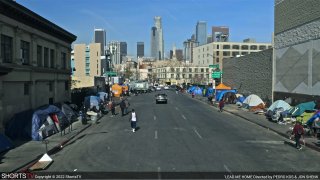 have been expanded to feature length, slightly over another sports entry, “The Queen of Basketball,” featuring another hugely charismatic subject cannily framed in extreme close-up, Lusia Harris, who scored the first ever point in Women’s Olympic Basketball and was drafted by the NBA.   “Lead Me Home,” an empathetic look at the homeless in L.A., San Francisco and Seattle, addresses an important subject via several subjects who will break your heart, but the film is light on addressing solutions and prone to artsy establishing shots and cutaways that add nothing to its argument.  The other two nominees fall short, “When We Were Bullies” raising an important issue but succumbing to over indulgence and Afghanistan’s “Three Songs for Benazir” is so specific to its focal character it muddles its message about the difficulties facing a young married man in a refugee camp trying to support his family. 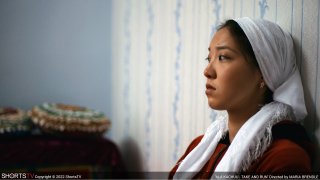 A young woman in Kyrgyzstan, Sezim (Alina Turdumamatova), dreams of leaving her tiny village ro travel to the capital to take her exams for college. Those dreams are shattered when three men, men she does not know, kidnap her for a forced marriage to a stranger. Now her dreams are only of escape in “Take and Run.”
B+

“The Dress”
Julia (Anna Dzieduszycka), a woman of diminutive size, dreams of love but knows it is beyond her grasp. Then, while drinking alone, she notices a man across the bar noticing her. Suddenly, there IS a chance for love and romance and she wants to make the best impression with “The Dress.”
B-

“On My Mind”
A man, a stranger, walks into a bar and orders a whiskey. Then, he spots a karaoke machine and begs the bartender to let him record a song. The boss says no – until a 500 Euro note is produced. This request becomes an obsession for the man and, in the end, you find out why in “On My Mind.”
B

“The Long Goodbye”
Riz (Riz Ahmed) and his extended family live a joyful, cacophonous life in London. A family gathering is interrupted by an anti-immigrant march being broadcast on TV. Then, they realize that the marchers, and great danger, are right outside their door in “The Long Goodbye.”
B-

“Please Hold”
In the not-too-distant future, law enforcement becomes totally automated and nary a human 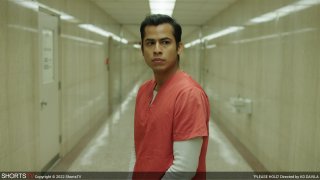 being can be seen. This is a problem for Mateo (Erick Lopez), a fast-food worker detained by a robotic cop drone. In custody and jailed, he is stymied by the new, all-electonic legal system that responds to his requests with “Please Hold.”
B+

“Robin Robin”
An egg falls from the nest during a storm and is transported far from home. A family of mice take in the little bird and raise her as their own “Robin Robin.”
B+ 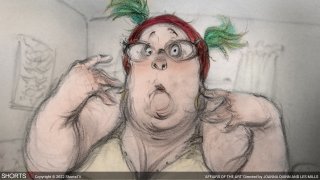 “Affairs of the Art”
Beryl (Menna Trussler) is an older lady who has been obsessed with art since she was a kid. She introduces us to her family, each with his/her own unique fixation, including pickling, threaded screws and pet taxidermy in “Affairs of the Art.”
B

“Bestia”
A mundane bureaucrat in 1975, the time of the Augusto Pinochet dictatorship in Chile, goes about her business of torture. The sheer routine of her daily horrendous deeds gives insight into an authoritative fascist regime that turns people into “Bestia.”
B

“Boxballet”
Olya is a prima ballerina as delicate as a flower. Euvgeny is a prize fighter who has been around 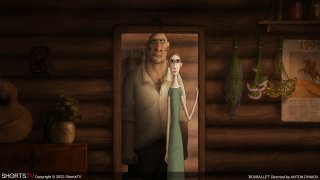 the ring many a time – and looks it. Can these two polar opposites attract? That is the question posed in “Boxballet.”
A-

“The Windshield Wiper”
“What is love?” a man reflects in a café as he drinks coffee, smokes cigarettes and observes on life going on around him. Then, lives are shown – a young couple on a beach, a homeless person and a mannequin, a suicidal woman high atop a building, a man and a woman pass each other in a grocery store like ships in the night in “The Windshield Wiper.”
B 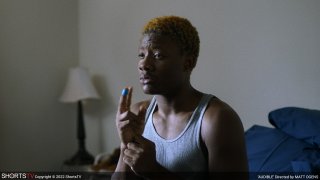 “Audible”
When I read the title just before watching “Audible,” I thought, “OK, a short doc about football.” Then, the film starts with muffled sounds and closed caption titles telling us what’s going on. Suddenly, the football documentary shifts your mental gears as you meet Amaree, a star player on the Maryland School for the Deaf team, and the stats tell of their incredible winning record - the only deaf team in their school conference – and their tragic loss of a teammate in “Audible.”
B+

“Lead Me Home”
“To feed my kids or pay the rent?” is a question that both saddens and sickens me in this, the so-called greatest and wealthiest country in the world. Co-directors Pedro KJos and Jon Shenk tackle this problem and, in a bit over 30 minutes, show us the resilience, fragility and desperation of over 500000 homeless people living in this “great” country in “Lead Me Home.”
B

“When We Were Bullies”
When I was a young teen, before I had my growth spurt, I was bullied by the bigger and tougher 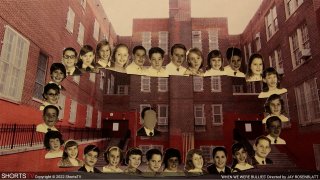 kids at school. I never looked at this from the bully’s POV but filmmaker Jay Rosenblatt gives us that view - he was the bully and looks for answers as to why. He also uses his film as a long needed catharsis to apologize to the boy from “When We Were Bullies.”
B-

“The Queen of Basketball”
Lusia Harris. That is the name of who may be one of the greatest basketball players that we never knew. Director Ben Proudfoot remedies that lack of knowledge for both the fans and those who are not and tells us the story of a three time national champion, Olympic silver medalist and pioneer in breaking the sex barrier in the NBA as “The Queen of Basketball.”
B+

“Three Songs for Benazir”
I am not sure what this little documentary by Elizabeth Mirzael and Gulistan Mirzael wants to be. It starts out as a love story between newlyweds Shaista and Benazir. They are starting a new life together, but this is in Afghanistan during the American invasion and that start is littered with obstacles in “Three Songs for Benazir.”
B-