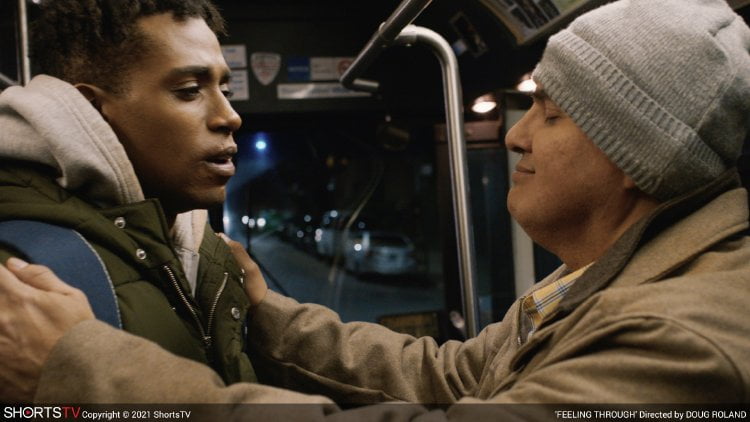 The nominated short Live Action films all find a unique perspective to explore their themes.  It is of note that the only two films not from the U.S. happen to be from Israel and Palestine.

Doug Roland’s “Feeling Through” is the Live Action collection’s most profoundly emotional and uplifting experience.  A homeless Black teenager in New York City relies on his cell phone to make contact and find shelter.  After spending his evening with two friends, Tereek finds himself alone, texting Rhoda to see if he might crash at her place.  An older homeless man tries to beg a quarter from him, and Tereek watches as he approaches another man on a corner, then leaves after getting no response.  That man is holding up a sign identifying himself as blind and deaf and Tereek tries to help, pointing him in the direction of a bus stop.  A series of almost comedic errors follow, but by the time Tereek walks off into the night with no place to go, he’s found a fast friend in Artie and achieved an uncommon state of grace right before our eyes.  A-

“The Letter Room” from Elvira Lind is sprung from an inspired idea.  Oscar Isaac stars 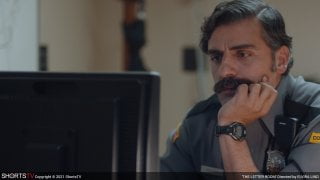 as Richard, an empathetic prison guard whose request for a transfer to enact prisoner programs lands him not quite where he expected, as Director of Prisoner Communications.   Tasked with censoring incoming and outgoing written correspondence for illegal activities and pornography, Richard quickly finds himself obsessed with the girlfriend, Rosita, of death row inmate Cris, her sensual and emotionally supportive letters stirring something in him.  But when she mentions a suicide pact, Richard is spurred to action, however unethical, and what he finds is not only not what he expected, but inspires him.  Unfortunately, Lind doesn’t quite stick her landing here, but “The Letter Room” is a short that could easily be expanded into a feature.  Alia Shawkat costars.  B

Farah Nabulsi illustrates the daily dehumanization many Palestinians suffer at Israeli checkpoints in“The Present.”  Yusaf Khalid is a young and handsome family man who flirts with his wife as he rushes through breakfast because, he tells her, he needs to go buy 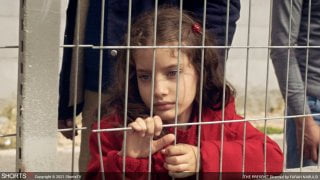 her a present for their anniversary and be back in time to make her dinner.  She promises he will get his present when she puts their young daughter to bed early (nod, nod, wink, wink).  He sets off with the little girl, who witnesses her father being harassed by an Israeli guard at the checkpoint, the man thoroughly amused by Yusaf’s statement that he knows the man standing right behind him, Ari.  With a late start, he gets an appliance store owner to agree to help him get his refrigerator delivered that afternoon, but guards will not allow the truck to pass.  Yusaf will face ridiculous obstacles in trying to fulfill a simple task, as will his daughter, who wets herself during their delays.  But it is also the young innocent who solves the made up problems of men who continue to threaten as she and her dad make their way home.  “The Present” tells a simple tale, but a loaded one.  B+ 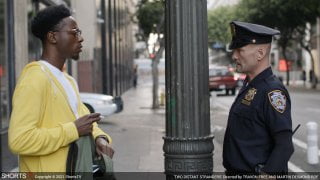 conventions for a modern day Twilight Zone outing.  Successful cartoonist Carter awakens next to the woman he just met the night before anxious to get home to his pit bull Jeter.  The slightly nerdy good guy gets some teasing back from his date.  Carter contacts Jeter on her landing via his Alexa treat device, then heads downstairs where a cop, Officer Murphy, begins to harass him.  The next thing he knows, Carter can’t breathe.  Then he awakens…right back where he started.  This time loop nightmare continues, exploring many avenues, but just when we think Carter’s found his way out, Free and Roe twist the knife.  B+

In the single take “White Eye,” Israeli Tomer Shushan uses a stolen bicycle to comment upon an ethical quandary involving an undocumented immigrant.  A man finds a bike locked on a street corner and calls the police to report he has just found his bike that was 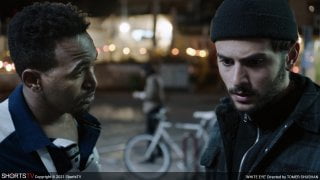 stolen a month earlier.  He is sure it is his because of a specific fender dent and a purple heart decal.  A nearby laborer offers to break the lock for a fee, but disappears when the police arrive.  They claim they have no record of the bicycle’s theft and tell him to wait for its owner to arrive and call them back.  That man turns out to be an Eritrean who insists he bought the bike outside a bus station.  The police return and demand his papers.  Shushan capably pulls off the single take over 21 minutes, although it adds nothing to his story.  Better is the way he’s tipped his hat to Italian neorealism and the Old Testament tale of King Solomon and the baby in exploring his moral conundrum.  B

“Feeling Through”
Tareek (Steven Prescod) is having a very bad night. He is thrown out of a friend’s crash pad and no-one is willing to help. He is at his wit’s end on what to do next when he meets a stranger named Artie (Robert Tarango) who happens to be deaf and mute. Artie also needs help getting home. Over the course of their evening together, the deaf and blind man helps Tareek to find something more important than himself and his woes.
This quiet two-hander is a real charmer as Artie quietly (he IS deaf and mute, after all) helps the troubled Tareek to find a different life path. And, I believe it.

“The Letter Room”
Richard (Oscar Isaac) is a guard at a maximum security prison, One day, his boss offers him a new job with the title of “director of prisoner communications.” His task is to read all of the incoming prisoner mail and censor anything that has to do with terrorism, drugs or pornography. Easy enough to do, but Richard is not prepared for how this will effect him, especially one man, named Jackson (John Douglas Thompson), waiting his time on Death Row.

“The Present”
A Palestinian couple is celebrating their wedding anniversary. Yusef, with their young daughter Yasmine, has big plans to go over the Israeli border checkpoint to buy a special gift for Noor. The plan starts to go bad when the IUDF soldiers at the border point, for no real reason, detain Yusef. A long time later, he is passed through but his problems are not over

I felt a growing anger as I watched Yusef, on his and Noor’s very special day, bear the burden of the Palestinians living as second-class class citizen living under the yoke of repression by the Israeli government. Yusef’s plight continues unabated until near the very end when Yasmine takes on the role of hero. The twist brought a satisfying smile to my face. And, a tiny glimmer of hope.

“Two Distant Strangers”
“Groundhog Day” gets a very different treatment in this tale about a young black man, Richard, who wakes in a unfamiliar bed. He apologizes to his date as he hurriedly prepares to leave – “I have to go home to my dog,” he explains. On the street, he accidentally bumps into another pedestrian, apologizes and a cop named Murphy intervenes in “Two Distant Strangers.”

The altercation turns deadly, not in Richard’s favor, and he wakes in a sweat – in the same bed, with the same woman and the previous “day’s” scenario is repeated, slightly different, but ends the same. Then, it happens again and again and Richard feels trapped. It is just like in “Groundhog Day,” but if Bill Murray’s day ends in his demise. There is also strong social message about our times.

“White Eyes”
This story, about a man trying to take his stolen white bicycle back, should have been called “White Bike,” instead. The man, when he spots his bike, takes matters into his own hands until the police arrive. Then things get complicated and a battle of wits against authority prevails in a reversal on “Bicycle Thieves (1948).”

The 2021 Oscar Nominated Shorts are releasing on 4/2/21 – for information on theatrical tickets or how to watch at home, click here.