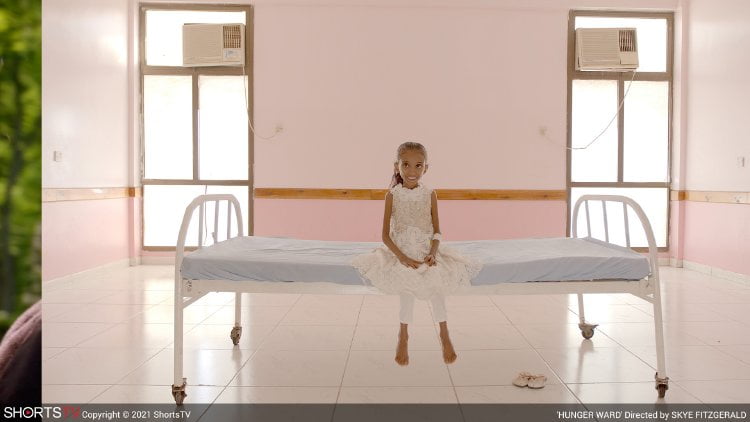 The short subject documentaries cover a wide range of subjects this year, three reaching into the past while addressing contemporary issues.

In Anthony Giacchino and Alice Doyard’s “Colette,” the 90 year-old French resistance fighter, who abhors the tourist industry which has grown around the Holocaust, travels to Germany to visit the Nordhausen concentration camp where her older brother Jean-Pierre 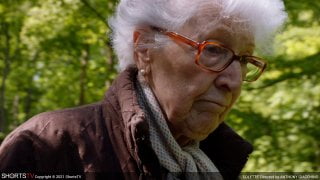 died. Colette Marin-Catherine, who looks extraordinary for her age, is accompanied by the young Lucie Fouble, who is compiling biographies of the Nordhausen victims and wishes to visit for research, an idea Colette can’t quite fathom.  After a going away party is held, Lucie questions Colette during their train journey, and we learn she was a very young member of the resistance who doesn’t think she did all that much, noting license plate numbers.  She also didn’t feel especially close to her brother, who she describes as a genius (and herself as ‘something of an idiot’), but that she greatly admired him.  In Germany, Colette has a strong negative reaction to the well-intentioned speechifying by the town’s mayor.  At Nordhausen, both the young girl and the old women break down, Colette distraught because she hadn’t thought to bring flowers.  The short has the feel of something we might have seen on the History Channel years ago with narration over archival footage cut with present day observations.  The film’s sentimental ending feels manufactured.  B-

One of the two likely Oscar winners, “A Concerto Is a Conversation” from Ben Proudfoot and Kris Bowers is a lovely call and response piece between young composer Kris Bowers and his grandfather Horace Bowers Sr.  After Howard asks Kris to explain what a concerto is (a ‘conversation’ between a solo instrument and an orchestra), Kris begins to draw forth his granddad’s fascinating history, one in which he recognized racism against his dad in Florida as a young boy and became determined to leave.  As what we assume is Kris’s composition plays in the background, we see a young man wishing to enjoy his granddad, diagnosed with cancer, as much as he can and a grandfather who became a successful businessman in Los Angeles who is rightfully proud of his family.  The filmmakers’ choice of having these two address ‘each other’ close up and directly into camera gives the film intimacy.  A-

Netflix’s “A Love Song for Latasha” from Sophia Nahli Allison and Janice Duncan brings back to life a young girl whose death became overshadowed by the crime which took it and the subsequent 1992 civil rights uprising in Los Angeles.  Using stills, archival footage and experimental animation that give the film an impressionistic feel, Allison and Duncan use the words of Latasha’s best friend and cousin to flesh out their subject.  The 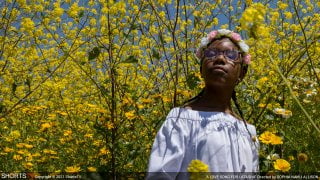 young girl we learn about lost her mother to a nightclub shooting, but was resilient, coming to the aid of a stranger being bullied who would become a stalwart friend.  She dreamed of becoming a lawyer to help right injustice and was an all A student.  She was loved, but a shopkeeper’s distrust of the Black community cost her her life, all over a container of orange juice (she had the money to pay for it in her hand as she died).  The filmmakers shoot her now grown friend on a beach as she considers where Latasha would be today, making us feel her loss.  “A Love Song for Latasha” is a moving tribute and stark reminder of just how long black lives have been devalued.  B+

“Do Not Split” chronicles the protests in Hong Kong which began when China announced in the summer of 2019 that it would extradite criminals from HK to its own courts, which have a 99% conviction rate and have escalated ever since.  Directors Anders Hammer and Charlotte Cook give us a real feel for what it feels like to be on the ground in the midst of these freedom fighters, fighting back against increasingly brutal police forces with Molotov cocktails and their sheer numbers, protecting themselves from tear gas with nothing but umbrellas.  We get a brief glimpse of China-supporting HK citizens demanding that protestors take off their masks and see a father’s concern for the son he saw being arrested on TV for the crime of being young.  After the Hong Kong Polytechnic University is placed under siege, elections deliver a democratic landslide, but victory is short-lived, China clamping down once again with a National Security Law that strikes fear in the hearts of many.  A young woman tells us that under the present circumstances, she has no reason to plan for her future – and then a global pandemic puts the world on hold.  (China has not reacted well to this short’s nomination, instructing broadcasters to play it down and avoid live coverage of the ceremony.)  B

If I had to place a bet, “Hunger Ward,” from Skye Fitzgerald, would be my pick for the win overall, though.  This is a devastating account of two clinics run by women in Yemen to address the severe malnutrition crisis brought on by a Civil War intensified by a Saudi Arabian led coalition’s air strikes, one which has shamefully been supported by the U.S. among others.  Fitzgerald doesn’t give that account until her film’s closing credits though, instead dropping us right into the horrifying issues facing Dr. Aida Alsadeeq as she struggles to keep children, kids who epitomize the saying ‘skin and bones,’ alive.  10 year-old Omeima has so little holding her underweight body together, her teeth and gums protrude from lips that cannot contain them.  When a baby succumbs, the doctor absorbs the abuse hurled by its grandmother, the woman whose unskilled interventions actually caused the death.  At another location, Nurse Mekkia Mahdi weighs children in a plastic bucket and keeps photos of those she’s lost on her phone, remembering all by name.  She also cares for a little girl, Abeer, ironically well-dressed and sporting gold earrings but without enough food because of blockades.  We can see the incredible beauty waiting to blossom in both of these young girls, but Mahdi works hard to get a smile from Abeer.  Fitzgerald uses Alsadeeq’s words about going in a circle in her visuals, featuring a ceiling fan, a playground merry-go-round and ultimately her own spinning camera.  She also lets us experience the horrors of the war itself at her midway point where she inserts narrated footage shot by the survivor of an attack on a funeral party.  “Hunger Ward” is distressing, but Fitzgerald excels in getting her message across (go to hungerward.org to donate).  A

“Colette: A French Resistance Fighter Fighting Fascism”
For 75 years, Colette Marin-Catherine, a former French resistance fighter during WWII, has refused to set foot on German soil. The reason? Her beloved brother died at the hands of the Nazis, in a death camp building V2 missiles, just three weeks before liberation by the Allies in 1945.

This decades-long refusal changes when a 22-year old historian, Lucie Fouble, convinces her to make the journey – one of both distance and time. What happens is both the story of the war and, in particular, Colette’s memories of her brother. It is also a story of healing and catharsis for Colette, who finally confronts her ghosts.

“A Concerto is a Conversation” 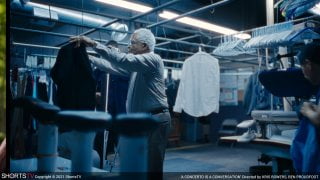 An elderly man sits down with his grandson, a concert musician and composer making his debut at the Disney Concert Hall. They talk about all sorts of things, including grandpa’s life growing up in the Jim Crow era, segregation and racial hate, the Civil Right movement and, of course, his grandson’s future and the pride he has. It is a touching story of two very separate generations bonding together.

“Do Not Split”
It almost seems like ancient history when the protests in Hong Kong engulfed the region and the world. We have seen countless news reports from the HK streets over the past couple of years and the violence the Chinese government has inflicted on its own people. 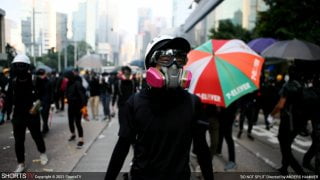 Director Anders Hammer records the familiar events through the eyes of the protestors and scholars on the scene. His cameras capture the anger against the Extradition Laws imposed by the government and the resistance it spawned.

The “story” moves from the first protests and the enthusiasm and hope of the mostly young demonstrators to the arrival of heavily armed and armored police whose sole function is to stifle freedom using teargas, bullets and water cannon. It is a moving entry as the documentary short film for this year’s Oscar and represents a powerful inclusion to the category.

“Hunger Ward”
The mind-boggling, man-made humanitarian crisis in Yemen, especially for the children starving, gets powerful treatment by documentary filmmaker Skye Fitzgerald. This is the third installment in his Humanitarian trilogy which began, in 2015, with “50 Feet from Syria,” and continued with “Lifeboat (2018).”

Here, to bring skilled focus to the catastrophe, the filmmaker concentrates on just four of those who suffer starvation and death by the hands of Saudi Arabia, Iran and, sadly, the United States of America. The four are divided in two pairs, with Dr. Aida and her tiny ward Omeima in one therapeutic hunger facility and Nurse Mekkia and another hunger victim Abeer at another. Smartly, the diminutive participants are two beautiful, though starving, young girls and garnered my sympathy from the very beginning.

Skye Fitzgerald’s decision to focus on these two pretty little girls and their caretakers really brings attention to the crisis we have heard about for years now. Personifying the suffering that is literally killing thousands of the Yemeni young gives the viewer a reason to put an end to the hate and destruction that has engulfed the tiny Gulf country.

“A Love Song for Latasha”
In 1991, Latasha Harlins walked into a Korean convenience store to buy a $1.79 bottle of orange juice. The owner, thinking the 15-year old was stealing, pulled out a gun and shot the girl in the back, killing her. And, this was just one of the acts against Black Americans that led to the 1992 LA riots. Latasha’s story is told by her cousin Shinese Harlins and best friend Tybie O’Bard with “The Love Song for Latasha.

I wondered, as I watched this heartfelt analysis of the life and death of a young black woman, just why it is nominated for an Oscar for best documentary short. This is mainly because, while Latasha’s story is interesting, the execution is decidedly amateur, using long, flashing video lights over the narration to make up for the lack of available footage of Latasha. Besides being and annoying device to mask the lack, it hurt my eyes, making me wonder if it could cause an epileptic seizure. I do applaud the effort to bring her story to light.

The 2021 Oscar Nominated Shorts will be released into theaters by Shorts TV on 4/2/21.  For information on tickets or how to watch at home, click here.