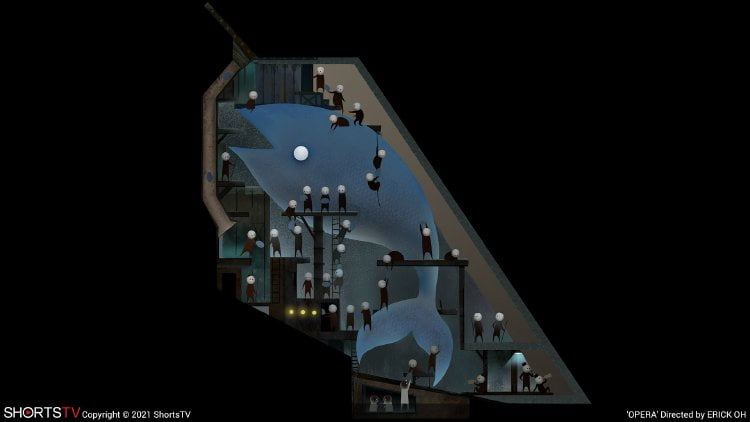 The Oscar nominated short animations comprise the most diverse program of the three featuring the obligatory Disney selection, a charming lesson for kids, to an experimental rumination of city life from France, off-beat humor from Iceland, a damning expression of grief and a mind-blowing history of the entire world told in nine minutes.

Madeline Sharafian’s pitch was given the go-head by Pixar’s SparkShorts program, but although it was created to be paired with “Soul” in theaters, “Burrow” has the look of a hand drawn animation sprung from a children’s book.  A little bunny with a blueprint for a one room home starts to dig and quickly begins to invade the homes of neighboring creatures.  Desperate, he digs too far down, striking water which may destroy the entire system of tunnels and homes.  But those whose paths he’d crossed - the mole and mice and frogs and badger and hedgehog – not only pitch in to save their neighborhood, but help the bunny build his home, delivering a nice lesson for kids about asking for help and strength in numbers.  B 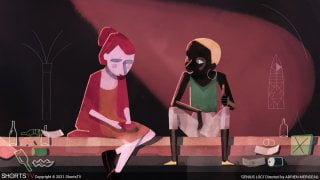 Loci” fits that bill.  Animator Adrien Mérigeau worked on GKIDS’ “The Secret of Kells” and “Song of the Sea” in Ireland before moving back to France and one can see their influence in his use of shapes as Reine leaves her home and ventures out into the city at night, ending up at a Church where Rosie’s organ ‘sounds like a tornado playing music.’  Mérigeau places characters and objects on plain white backgrounds, turns papers blowing in the breeze into dogs and uses screeching metallic sounds to project chaos, but his narrative may be too obscure for many.  B

Will McCormack & Michael Govier’s “If Anything Happens I Love You” achieves maximum emotion with a minimalist look, black and white figures of a man and woman sharing space with objects like spaghetti and meatball dinners, a dryer full of clothes or a basketball hoop.  They are also literally shadowed by their past selves and a young girl illustrating happier days.  When the explanation for these two adults’ grief comes, color equates the U.S. flag with the flashing lights of police cars.  This powerfully affecting short succeeds both emotionally and politically.  A-

The most mind blowing animated short is “Opera,” a film which deserves to be seen on the largest screen imaginable (in actuality it is an 8K art installation, originally shown on a 16 x 9 meter wall).  Erick Oh has constructed a pyramid whose tiers are connected with shoots and ladders akin to Nintendo’s Super Mario, but what is happening in his world is endlessly fascinating, a depiction of human history in daylight and in dark that can be watched in a continual loop.  One could watch this 9 minute film easily for an hour.  “Opera” is truly unique work of art.  A

From Iceland comes “Yes-People,” a humorous day in the life of people in several apartments who tend to say ‘yes’ until they say ‘no.’  An older man shovels the walk 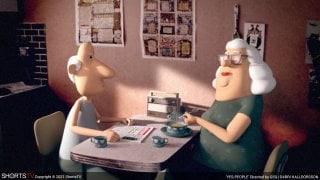 outside.  Someone slurps soup so loudly, the radio is turned up in response.  A music teacher keeps the beat on her cup as a student plays the flute.  A woman drinks while her husband is at work.  The shoveler’s wife gets frisky and their cries of ‘Yes! Yes!’  are heard by all, but the man is let down when he gets up and looks out the window.  Featuring bottom heavy characters with distinctive facial features, “Yes-People” is a short comedic gem.  B+

“Burrow”
In this latest work by Pixar Animation, “Burrow,” a little bunny looks happily at her crude 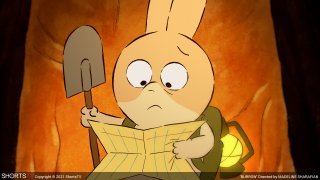 plan to build her special burrow, which includes a spinning disco ball. But, when she begins her construction, she attracts two of her neighbors, a mole and a field mouse, but their unwelcomed visit drives her to find a new spot to build. At every turn, though, she runs in even more neighbors, including literate frogs, baking hedgehogs, newts taking a bath and ants and beetles having a party.  This is all too much for the little bunny and she tries to dig down even deeper. But disaster strikes and, with the help of all her new friends, they avert disaster and live happily ever after. It is not a stretch for the animation juggernaut but “Burrow” is visually always interesting and carries a good message for kids – and a bunch of good, lovable characters.

“Genius Loci”
This animated short by art director turned director Adrien Merigeau (“Song of the Sea (2014)”) explores many things in its brief 16 minute runtime. It may be about mental illness or drug use or mysticism, but that is not entirely clear. But, the animator’s visual techniques and fast-changing morphing of geometric symbols keeps the eye entertained – kind of like looking through a kaleidoscope – as the story itself morphs from wonder to confusion to anger and, finally, comfort and understanding. It is a lot for such a short amount of time.

“If Anything Happens, I Love You”
A couple silently eats dinner. A shadow of conflict and loss hovers over them. As their 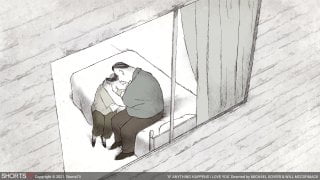 sorrow plays out and little things become apparent, like a baby’s t-shirt in the laundry. We know of their loss, but the sense of love, loss and love re-found plays out as we learn the answer to the question: why? It is not a kind answer.

“Opera”
The cycle of life contained in a pyramid is one of those artistically brilliant depictions that come along only rarely. Life begins, in this world, in harmony and industry. But, as the camera eye flows over this miniature world, we observe religious idol worship, a people enslaved, terror, war and learning. In the span of just nine minutes we see a world evolve, thrive, fall apart and rebuild. There is so much going on up on the screen that it should, and I almost never say this, be seen on a really big screen.

“Yes-People”
The denizens of an apartment building wake to face yet another day. As they scatter about town and go about their business, we see the traits of the inhabitants come out, like obsession, sloth, anger, passion, boredom and addiction. And, it is all without words but with a great deal of expression.

The 2021 Oscar Nominated Shorts are releasing on 4/2/21 – for information on theatrical tickets or how to watch at home, click here.