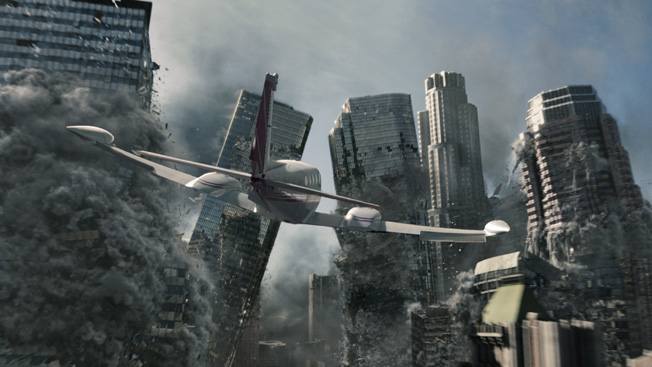 It has long been said that the ancient Mayans held the secret to the end of the world. When the earth's crusts begin to shift, global governments try to effect a survival plan, but Jackson Curtis (John Cusack, "Say Anything," "War, Inc.") is only intent on having his ex-wife Kate (Amanda Peet, "Syriana," "What Doesn't Kill You") and their two children live through the year "2012."

The scientific world discovers that the neutrinos from a massive solar flare have penetrated the crust of the Earth, causing its core to heat up dramatically. (Damn neutrinos!) American geologist Adrian Helmsley (Chiwetal Ejiofor) rushes to Washington to tell the authorities, including the President (Danny Glover), that catastrophic events are looming that will cause the end of the world in “2012.” I missed the “opportunity” to see Roland Emmerich’s latest epic disaster tome at the theaters. However, after talking to Laura – who sat through the two and a half hour bombast – I figured she had taken a bullet for me. Forewarned is forearmed, they say, and I took the opportunity to review the movie on DVD. For the first hour, I got a kick out of the rollercoaster ride of jaw dropping escapes by car and airplane as Los Angeles crumbles and tumbles down, satisfied that I had been mildly entertained by the eye candy on my home screen. Then, I realized I had another 98 minutes to go! I hunkered down, got comfortable, and proceeded to watch more and more and more of the same. What could have been a tight, action packed pop corner at about 90 minutes is a big, bloated bore fest, even with a campy attitude going in and the comfort of my own home. If one hair-raising drive through the harrowing LA landscape is good, then three or four such drives, with more explosions, collapsing bridges, falling cars and tumbling down buildings, must be great. The same goes for airplanes just making it off the airport runways as the earth gobbled them up – when one such escape would work perfectly fine, three is just a waste of time and celluloid. I have always though that Roland Emmerich was a hack director with a penchant for cheese and “2012” is no different from “Independence Day,” “Godzilla” and “10,000 B.C.” He just has a bigger F/X budget. His stories suck and he makes good actors look bad. The DVD comes with deleted scenes (after watching the movie, there are not nearly enough of these) and an alternate ending (longer, I think, than the one used). There is a featurette called “Roland Emmerich: The Master of the Modern Epic” that is self-aggrandizing and a commentary, over the movie, by Emmerich and co-writer Harald Kloser. Emmerich sounds like Werner Herzog on valium and has such insights as “I always wanted to work with Woody Harrelson” and lamentations over having to cut back on the special effects. (Are you kidding me?) There is also a music video, “Time for Miracles,” by Adam Lambert (who should change his name to Lamebert for this one). Even though the extras are chock-a-block, they are still for a bad movie.