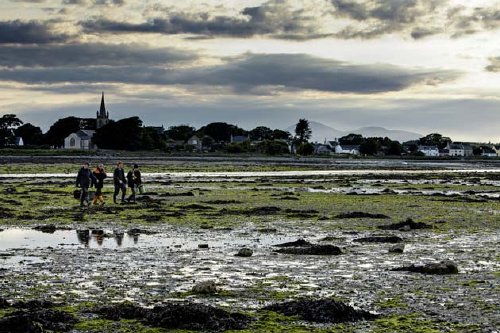 The five nominated live action shorts from 2011 mostly have humor in mind with four of the five providing laughs from life ironies to the laugh out loud kind.

Writer/director Peter McDonald's entry from Ireland, "Pentecost," finds altar boy Damian Lynch in deep kimchi when his football-addled brain makes him a bit too aggressive with the incense burner. It's 1977 at the height of World Cup fever when dad grounds him, including all rights to watching matches on the telly. A visiting Archbishop forces the parish to call him off the bench with unexpected results. This is a tight little film, which cleverly equates sports and religion as sacred rituals of Irish life and it's a small treasure that really scores. B+

Feature writer/director Terry George ("Hotel Rwanda") goes for the short story to tell what at first appears to be the dramatic tale of a man (Ciarán Hinds, "The Debt") returning to the English seashore with his grown American daughter (Kerry Condon, "The Last Station") for the first time since he left. At a party, she learns things she never knew about dad - like the fact that he had a band with his best friend (Conleth Hill, HBO's 'Game of Thrones'), a man he's lost touch with, as well as an ex-fiancee (Maggie Cronin). She insists he face his past and suddenly nothing is what it first appeared. Lies, truths and omissions come together to show how history is changed by the point of view from which it's seen and George deftly blends light humor, irony and outright comedy to weave a gentle tale. B

Leave it to the Germans to get serious. Cowriter (with Florian Kuhn)/director Max Zähle offers the Academy's slot for third world children's story with "Raju," but it is nothing like you might

expect. A couple travel to Calcutta to adopt said orphan, a thin little boy with oversized eyes who delights his new mother Sarah (Julia Richter). But when she falls ill overnight (leaving this critic to wonder if he might just be demon seed), it's left to dad Jan (Wotan Wilke Möhring, "Valkyrie," "Soul Kitchen") to entertain the lad (Krish Gupta). Zähle sets us on edge with all the distractions of Calcutta until the inevitable happens, but when Jan begins to dig deeper what he discovers is earth shattering on more than one level. This one gets my vote for the prize. A-

American Andrew Bowler's sci-fi comedy "Time Freak" is a nifty little twist on the old conundrum on what happens if one travels to the past to fix the future. His screenplay is tight and the concept is funny, but this one isn't as multi-layered as the others nor as cinematic, ironically because of the twist he's given his tale. There's something about this one that feels like the progeny of Mike Jittlov's 1979 cult item, "The Wizard of Speed and Time." B-

Norway's Hallvar Witzø makes his directorial debut with a story by Linn-Jeanethe Kyed that's drenched in that special brand of dry Scandinavian wit. If Ingmar Bergman made a comedy, it

might go something like this tale of a man, Oskar (Edvard Hægstad) given six days to live who must keep Death, a comely blonde (Ingrid Viken) at bay, while trying to get a message across the Atlantic using a tuba. Terribly inventive, this calling card proves Witzø knows his cinematic tricks. It also once again begs the question as to why Scandinavians seem so drawn to C&W. From the Bent Hamer ("Kitchen Stories," "O'Horten") school of filmmaking "Tuba Atlantic" may give "Raju a run for its gold.  A-