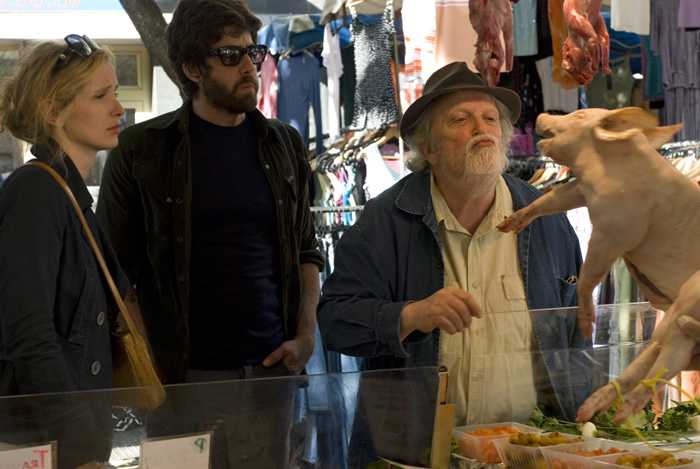 Photographer Marion (Julie Delpy) and interior designer Jack (Adam Goldberg) are returning home to New York City after a less than romantic vacation in Venice. On the way, they make a stopover in Paris to visit her folks and retrieve her cat from their care. Jack finds himself a stranger in a really strange world as he, who does not speak French, must cope with the maelstrom created when he meets Marion's family, friends and, to his chagrin, ex-lovers as the couple spend "2 Days in Paris."

Attractive and talented actress Julie Delpy makes her triple-hat debut - writer, director, star - in a manic little comedy about two people who may not be made for each other. Jack and Marion spent two weeks in Venice but, instead of romance and candle-lit dinners, he obsessed with his new digital camera, capturing their vacation through a lens rather than actually living it. With a less-than-satisfying holiday behind them, the couple looks upon their Paris interlude as the means of salvaging their vacation. If only it were to be. Jack's first meeting with Marion's clan turns into a cacophony of loud discussions about family and friends, arguments over just about anything and, of course, talking about Jack - all in incomprehensible, for the New Yorker, French. Former revolutionaries, Marion's mom and dad (Delpy's real life mother and father, Marie Pillet and Albert Delpy), are really just old, free love hippies who happily discuss Jack's sex life and American-ness, at full volume. Then there are Marion's former amours, and there are a lot of them! And, to Jack's horror, she is still close (I mean close) friends with most the many ex-boyfriends. This culture shock is too much for Jack as his once-stable relationship with Marion is in danger of breaking down and breaking up. Multi-hyphenate tyro Julie Delpy (she also produced, edited and composed the score for "2 Days?") has learned a lot about filmmaking during her long time collaboration with director Richard Linklatter ("Before Sunrise (1995)" and, nine years later, "Before Sunset," both with charming performances by Delpy and Ethan Hawke). Her debut oeuvre is a light, fast-paced comedy about clashing cultures, boisterous family life and a relationship on the skids. Delpy does this with wit, humor and a no-holds-barred look at liberal French family life. As director, Delpy moves her fine cast with precision and grace. As screenwriter, she exhibits a sure hand at comedy. And, as an actress, she shows a wonderfully assured presence. Adam Goldberg is relegated to the clueless role as Jack but the actor embraces his bemusing situations and gets the most comic/angst mileage out of his character's vehicle. The rest of the well-cast supporting actors, particularly Delpy's parents, help keep up the frantic and funny pace. Good use is made of the beautiful Paris locales, bringing the viewer into that majestic city as both tourist and inhabitant. (It is one of my favorite cities to visit.) "2 Days in Paris" is an auspicious debut for Julie Delpy and one that will give her the chance to explore her obvious and many talents. I cannot wait to see what she comes up with next.