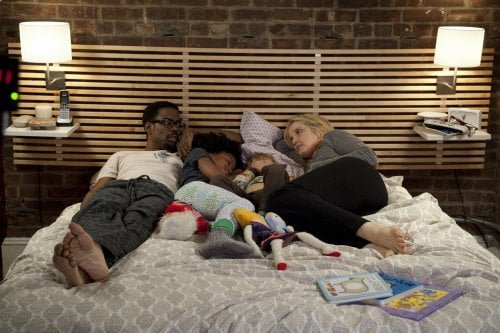 Marion (cowriter (with sister/costar Alexia Landeau)/director Julie Delpy) thinks she has no chance at love now that she's over 35 and raising her ex-lover Jack's child Lulu (Owen Shipman) on her own, but her coworker and confidante at the Village Voice, Mingus (Chris Rock), thinks she's hot. Just when they've settled into domestic bliss, though, their relationship will be tested to the breaking point when her father, sister and sister's unannounced boyfriend arrive from France to spend "2 Days in New York."

Following in the footsteps of Richard Linklater, the man who gave her perhaps her most iconic role in "Before Sunrise," Julie Delpy continues to mine the romantic travails of her character Marion when an American boyfriend must contend with her French family in a sequel to 2007's "2 Days in Paris." In addition to the familial, linguistic and cultural clashes that ensued the first time around, Delpy adds racial differences by casting Rock as her boyfriend with his own ex, Elizabeth (Malinda Williams), and daughter Willow (Talen Riley). Mingus is subjected to many of the same things Jack was in the earlier film - Marion's dad's Jeannot's (Julie's dad, Albert Delpy, "2 Days in Paris" - mom Marie Pillet passed away in 2009) embarrassing frankness about sex, the revelation of her rather lengthy list of past lovers (including sister Rose's (Julie's sister Alexia Landeau, "2 Days in Paris") current lover Manu (Alex Nahon, "2 Days in Paris")), Rose's inability to maintain any sense of modesty and the crazy-making effect this all has on Marion. Quarters are even closer, magnified by disapproving neighbor Bella (Kate Burton, "127 Hours"), subjected to Manu and Rose's pot smoking in the apartment elevator, and her surgeon husband Ron (Dylan Baker, "Happiness"). The major ingredient Delpy's added to the mix this time around is career. Marion is under pressure with her first art show about to open, the very reason for the family visit. Delpy's two best ideas rise from this premise, one having to do with a whopper of a lie told to keep Bella at bay which reaps her great financial rewards at the cost of artistic satisfaction, the other having to do with the mere identity of the person who buys her conceptual piece - a contract for her soul. Mingus, who talks to a cardboard standup of Obama that he keeps in his office, gets a shot at an interview with the real thing only to have his connection witness a Marion/Rose meltdown. Delpy's unafraid to delve into raunch and grossout humor, but sometimes a little goes a long way (case in point - "Bridesmaids"). The same holds true for the sheer chaos the director whips up around her characters, which can become wearisome, stretching credulity. But the filmmaker has her heart in the right place and is willing to make herself the butt of many a joke, qualities which buoy her film through its lesser patches. "2 Days in New York" isn't groundbreaking, but it's genuinely funny and ends with a bit of clever comeuppance sprung from a miscalculated good deed. Now, whatever happened to Delpy's 2009 film, "The Countess," about the bloodthirsty 17th century Hungarian countess Bathory?