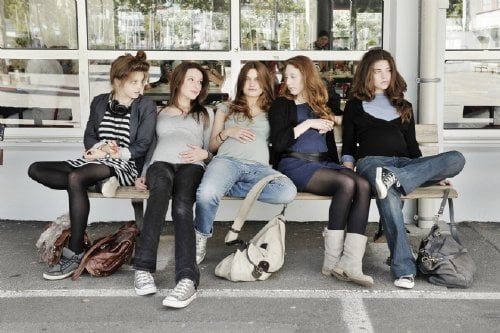 16-year old Camille (Louise Grinberg) is pregnant. Her friends rally around to give moral support when they have an idea: Let’s all get pregnant and raise our babies all by ourselves, without parent interference! They make a pact and the local maternity ward begins to do a booming business from these “17 Girls.”

Beauty Camille (Louise Grinberg, "The Class") and her four friends have formed a high school clique that has no room the pale, red-headed Florence (Roxane Duran, "The White Ribbon"). But Camille has a secret, confirmed during a class-wide physical, and when Florence confides in Camille that she, too, is pregnant, that clique takes on a new life. Camille starts a cult of maternal sisterhood with dreams of forever friendships among young mothers and their children who will also be the same age together. Soon the adults of Lorient are debating just why their fishing port has a teenaged pregnancy epidemic reaching "17 Girls." Writer/directors Delphine and Muriel Coulin (assistant camera on Kieslowski's "Three Colors") make their feature film debut using the real life 2008 'pregnancy pact' scandal of Gloucester, Massachusetts as a jumping off point for a stunning looking contemplation on the often obsessive romanticism of teenaged girls. Production designer Benoît Pfauwadel and cinematographer Jean-Louis Vialard ("The Sea," "Tropical Malady") employ a pale blue and yellow pallette to reflect the sea and sand of the girls' environment and the dreaminess that engulfs them, for a awhile at least, in this Gallic response to "The Virgin Suicides." The first adult to be exposed, Camille's mom (Florence Thomassin, "Mesrine: Killer Instinct") responds with the cold, hard truth about child rearing, having experienced single motherhood herself. She's just started to experience a taste of freedom, something Camille resents, and she tells her daughter flat out that she will not be tied down again for the next eighteen years. Meanwhile, a beachside party offers the opportunity for more girls to get pregnant. One, Clémentine (Yara Pilartz), whose appearance makes everyone always think of her as too young for anything, offers a boy 50 Euros to sleep with her. As the girls of Lorient go all lunar, the Coulins show that the adults aren't necessarily all that much more grounded. With a circular pan, we see various members of a teachers' conference express their takes on the matter both pro and con, liberal and conservative. A coed class is shown a live birth film, but this is not sex education, rather scare tactics. A group of girls asks the local pharmacist if they can reuse a pregnancy test. Then Camille gets an ultrasound and the reality begins to sink in. Flavie (Esther Garrel, "La belle personne") learns her amniotic fluid may not support her unborn child. The girls pull together and fix up an abandoned trailer with quilts and pillows, a crash pad for escaping their homes. Camille's brother, a soldier on leave, takes her for a wild ride to release tension - two siblings both too young to be facing life and death. When Clementine hits the trailer during a wild storm, she has to call her mother. A calm scene of partnered pool therapy, huge bellies cresting the surface of the water, calls back to the lithe forms gathered in that opening scene waiting outside the nurse's office. But Camille has created not only a pact but a pack. They turn on one of their members for (easily detected) subterfuge, then break Clementine out in order to vandalize a local business and literally play with fire on the beach. These kids aren't where they think they are and the life they envisioned is in the clouds. "17 Girls" is a solid feature directorial debut, vested in real life but encompassing global subjects, its stunning visuals serving its subject well. A humorously defiant class photo has already become a memory by term's end.

The film is based on a real incident in 2008 when 17 Gloucester MA high school girls made a pact to get pregnant. Their reason: have the babies and raise them together and garner their children’s’ unconditional love. Filmmakers Delphine Coulin and Muriel Coulin take this American story and deftly relocate it to small-town France, keeping the details of real life but making it distinctly Gallic. This is an ensemble film (as one would expect with the title “17 Girls”) and the Coulins do a terrific job in keeping the characters from melding together. Each is recognizable as a unique character, some strong, some weak but all genuine-feeling teenage girls. The story is remarkable in that it does an honest telling of real life events and does it accurately, too. One question: why are American stories being told (well) by French filmmakers? Can’t we tell our own stories?