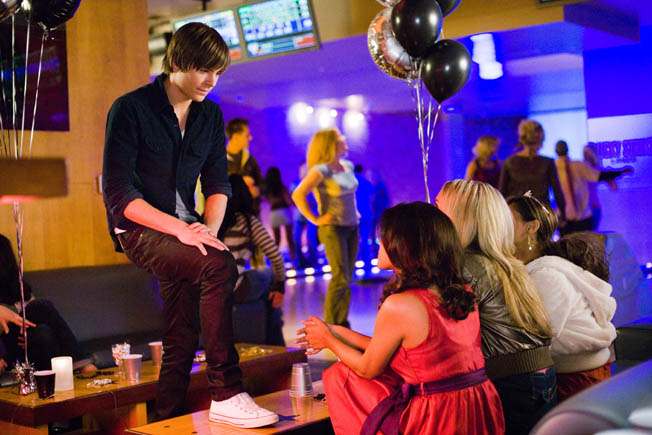 Back in 1989, Mike O'Donnell (Matthew Perry, TV's "Friends") was his high school's star basketball player, but he gave up a shot at a college scholarship to marry his pregnant high school sweetheart Scarlett (Leslie Mann, "Knocked Up"). Twenty years later, with his marriage in shambles and his career going nowhere, Mike (Zac Efron, "High School Musical 3") gets the surprise of a lifetime when he's given the chance to be "17 Again."

Back in the late 80's, we had such age traveling films as "Big," in which Tom Hanks is a little boy who gets an adult body and father/son swaps like "Vice Versa," itself a spin on the mother/daughter reversal of 1976's "Freaky Friday," so the time seems ripe to resurrect the genre with "17 Again," a kind of merging of these films with "A Wonderful Life." Writer Jason Filardi ("Bringing Down the House") follows the genre checklist - an unassuming magical agent (high school janitor Brian Doyle-Murray), a sidekick best friend who's in on the switcheroo, uncomfortable dating situations involving the subject's children - and tries to maintain an internal logic, not always successfully, but director Burr Steers proved agile at directing a quirky ensemble with "Igby Goes Down" and has done it again here. Yes, he gets his money shots out of the way instantly, introducing Efron practicing hoops shirtless, then featuring his dance moves with a bevy of cheerleaders, but then the film falls into its groove and it's a surprisingly sweet confection. The Mike of 1989 is a true blue boyfriend who abandons the court at his biggest moment to pledge himself to the woman he loves. Twenty years later we learn she's had it with his constant living in the past. We meet Mike of 2009 living with his best friend Ned Gold (Thomas Lennon, "I Love You, Man"), a software guru living in a nerd's dream house and losing a regional sales management position to a woman still wet behind the ears (this last plays nonsensically, a kick to our hero for no other reason than he's down). After a visit to the old high school trophy case and a run in with a vortex, Mike awakens to find his clock's been rewound and after freaking out Ned, convinces him to act as his dad to register him back at school to have his second shot. But Mike finds himself in school with his own kids, daughter Maggie (Michelle Trachtenberg, "Ice Princess," TV's "Gossip Girl") and son Alex (Sterling Knight) and discovers instead a chance to become a better dad. Zac Efron is a good looking kid who exudes a sweetness and a talent for comic timing. This film rests squarely on his shoulders and he proves capable of carrying it. He even pulls off the big climatic emotional moment with tears and feeling. Also charming is Thomas Lennon as buddy Ned, an eccentric fanboy extraordinaire who immediately falls for Mike's principal (Melora Hardin, "27 Dresses," TV's "The Office"). Sterling Knight is a solid new face as bullied Alex, charmingly awkward both verbally and physically when he's not just amusingly resigned ('I'd shake your hand but it's taped to my ass') but Trachtenberg is getting too old to play a high school kid (Efron barely squeaks by and he's two years younger) and has little to do but suck face with Hunter Parrish ("Freedom Writers") as her obnoxious boyfriend Stan. Leslie Mann is OK as the mom who doesn't know what to make of Alex's friend who looks just like her soon to be ex (oddly, she's the only one who ever notices a resemblance, even though Mike ends up with the same basketball coach and his picture is in the high school). Matthew Perry is a surprisingly good physical match for Efron and does what he can with a role that casts him as Prince Charming gone stale for twenty years. Margaret Cho makes a surprise appearance as the school's sex ed teacher. The filmmakers have some fun contrasting high school of today with two decades past without going overboard. There are subtle changes like the advances in cheerleading on display and not so subtle ones like more blatant sexual behavior. Wise choice painting the 'new' Mike as a 'good' boy preaching abstention while having to fend off teenagers wanting to hook up. Ned's subplot romance is a delight. Following the recent "Freaky Friday" remake, "17 Again" is a welcome update to an old genre. Efron may still be in High School and may be still dancing, but he's moved a step beyond the Disney comfort zone with his appeal still intact.