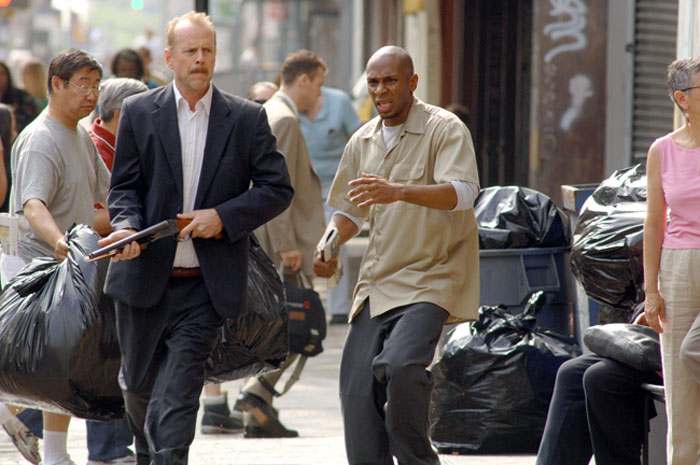 NYPD Detective Jack Mosley (Bruce Willis) is hung over and off the clock when his Lieutenant asks him to escort detainee Eddie Bunker (Mos Def, "The Woodsman," "The Hitchhiker's Guide to the Galaxy") to the courthouse where he's scheduled to testify before a grand jury in two hours. Jack, who is convinced people cannot change, just wants to get a drink and get home, but he is surprised by the circumstances which bond him to his charge and learns that not only one, but two, people can change their lives in just "16 Blocks."

Harrison Ford may have the glitzier star, but Bruce Willis has proven himself the better actor over the years, either carrying actioners like his star-making "Die Hard" series or doing little character gems like "Nobody's Fool." Willis has never looked rougher or more ragged than he does here as Jack Mosley, a walking death wish who discovers his sense of justice still has the spark of life. Jack could care less about Eddie when he initially picks him up. He doesn't wait for the kid's suit to arrive and is annoyed by Eddie's nasal chatter. But when Jack stops at one of his refueling stations, Eddie is put in harm's way. When Jack discovers that Eddie is about to testify against one of New York's dirtiest cops, he decides to protect and deliver him, even if it means going against one of his oldest colleagues, Frank Nugent (David Morse, "Dancer in the Dark," "Dreamer"). Screenwriter Richard Wenk has essentially taken "Assault on Precinct 13" and made it mobile. He's given his two main characters roads to redemption with plenty of tight squeezes and bonding exercises along the way, material Richard Donner, the director of the "Lethal Weapon" series, is an old hand at. He doesn't disappoint staging various shootouts, car chases and explosions with vigor and balancing them with quieter moments of character detail. Two revelations near film's end are actually unexpected. Watch for a cute visual reference Donner makes to "Die Hard." Willis carries this genre outing, which can only be faulted for running on a bit long. Mos Def is proving to have quite a range, his siren-like chatterbox here the complete opposite of quieter turns in things like HBO's "Something the Lord Made." Morse is saddled with the relentless villain of the piece ("F#$& the truth!"), but he spins a bit of believable empathy for Jack into Frank that gives him an edge of unpredictability. Jenna Stern ("Hitch") makes an impression as the unconventional woman in Jack's life. "16 Blocks" is a meat and potatoes actioner that's raised up by choice direction and a juicy turn by star Willis. Warner Brothers may be surprised to find it performing better their February release, the Harrison Ford starrer "Firewall."