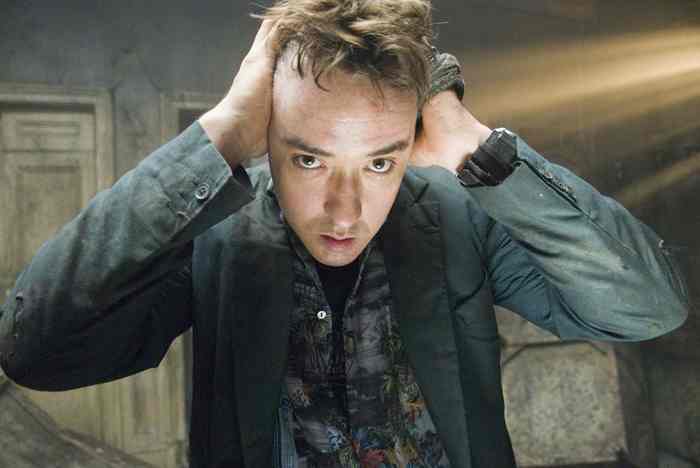 Mike Enslin (John Cusack) is a paranormal investigator and author of books exposing so-called hotel hauntings across the country. His latest investigation brings him to the Dolphin Hotel in the heart of Manhattan where, reportedly, one room in particular is the site of scores of unexplained deaths and suicides. He cajoles hotel manager, Gerald Olin (Samuel L. Jackson), to let him stay in the room for a night but Olin warns Enslin that no one can stay for over an hour in room “1408.”

On a dark and stormy night, author Mike Enslin (John Cusack, "The Ice Harvest") checks in to the Weeping Beach Inn to check out its ghosts for his new paranormal book on haunted hotels. He cynically dismisses the very notion as nothing but a marketing gimmick by those rerouted highways have left behind, but a postcard he receives from the Dolphin Hotel in New York City intrigues him into looking up its history and he becomes compelled to book room "1408." Adaptations of Stephen King horror have produced wildly uneven results from the classic ("Carrie," "The Shining," "Misery") to the disaster ("Children of the Corn," "Maximum Overdrive," "Dreamcatcher"), the middling ("Cujo," "Christine," "Secret Window") to the under appreciated ("Dolores Claiborne," "Apt Pupil"). Screenwriters Matt Greenberg ("Reign of Fire") and the "Ed Wood" and upcoming "Cell" team of Scott Alexander & Larry Karaszewski may not have come up with a classic, but director Mikael Håfström ("Evil," "Derailed") milks it for all its worth - "1408" has some genuine creeps. Enslin perceives the message warning him away from the Dolphin's notorious room as a come-on and even the artful protestations, manipulations and downright pleading from manager Gerald Olin (Samuel L. Jackson, "Snakes on a Plane," "Black Snake Moan"), forced to book the room via an obscure state law, cannot dissuade Mike from staying the night. 'Most people don't last an hour,' Olin tells him after recounting tales of deaths both macabre and mundane from the very first week of the hotel room's existence. Armed with a bottle of expensive cognac, Michael enters his room and notes that yes, it has its oddities. The bedroom has no windows and one of the artworks is vaguely sinister. He's even rattled when the alarm clock goes off blaring The Carpenters' "Only Just Begun," and surprised when a hotel mechanic refuses to enter, instead instructing him on how to fix a malfunctioning thermostat. Once the clock decides to turn itself into a 60 minute stopwatch, things start to get really interesting, so bizarre that Enslin tries to talk himself down by clinging onto the belief that Olin's spiked his booze, but what 1408 capitalizes on is its occupants own deep-seated demons. Besides the jolts of things like ghostly inhabitants recreating their deaths, dopplegangers in adjacent apartments and architecture that can reconfigure itself like an Escher painting, what "1408" brings to the table is an underlying dread that permeates the proceedings even when things begin to look up. John Cusack, who essentially delivers a one man show, really lets himself loose as a cynic who unravels to a primal scream of guilt and loss. This is far worthier material for the actor than his earlier foray into the 'psychological thriller/haunted motel' genre with "Identity." And while the actor largely carries the show, support is noteworthy, particularly from Jackson once again relishing dropping 'F' bombs on his nemesis. Len Cariou ("Flags of Our Fathers") and young Jasmine Jessica Anthony are effective spirits. Art direction by Stuart Kearns and Doug J. Meerdink achieves the feel of an old NYC hotel that has seen better days but still has charm and character and the special effects team and director Håfström provide the sinister edge. And while things may go a bit overboard in 1408, the story has a unique and unexpected way of doubling back on itself that more than compensates. "1408" is a very satisfying addition to a genre that all too often disappoints.

Debut feature film helmer/scripter Gela Babluani creates a tale of suspense that brings 22-year old Sebastien into a world that rivals the one depicted in Michael Cimino’s 1978 film, “The Deer Hunter.” Sebastien struggles to support his family and takes a roofing job with sickly Jean-Francois Godon (Philippe Passon), a man who is anxiously waiting for the arrival of instructions that could net him a load of money. The awaited packet arrives but too late for Jean-Francois, whose failing health and drug abuse finally get the best of him. His wife, Christine (Olga Legrand), finds the cryptic instructions and promises them to her husband’s friend but a sudden breeze blows the envelop into the hands of unsuspecting Sebastien. The young man reads the mysterious instructions and, since his employer is now dead and unlikely to pay Sebastien for his work, decides to follow the clues and assume Jean-Francois’s identity. Unbeknownst to the impostor, the police are also very interested in where Sebastien now heads. He is followed by the cops but unknowingly slips through their fingers when he receives new instructions. He makes his way to a secret meeting place but still does know what is held in store for him. He arrives at a scene fraught with testosterone-infused tension and learns that he is to be Contestant #13 in a multiplayer tournament of a deadly game of Russian roulette. There is much more to “13” than the extraordinarily tense game of Russian roulette, with a twist. The multiple players are each given a revolver, one bullet and line up in a circle, one behind the other. They are ordered to load the single cartridge by Master of Ceremonies (Pascal Bongard), spin the cylinder and place the barrel at the back of the head of the man in front. The Master counts “one-two-three” and all the players pull the trigger at the same time – except for Sebastien. A tense moment ensues as the young man is, loudly and emphatically, told that he must pull the trigger or be shot. He enters the next round and the next and the next…. As I said, there is a lot more going for “13” than just the harrowing game of Russian roulette – and I don’t mean to denigrate the game by using the word just.” The deadly contest represents the film’s most tense and gut-wrenching moments, especially as it becomes a dispute between Sebastien and his main opponent, the top player in the murderous tournament, six-time winner Jacky (Aurelien Recoing of “Time Out” fame). When the games end, Sebastien faces a change of fate and fortune. Part two takes on a more ironic form as the story weaves things in a way that keep you guessing and wondering to the end. The film’s central figure, Georges Babluani, is an enigmatic figure and overshadowed by the excellent cast surrounding Sebastien. Aurelien Recoing, as his tough, unflappable adversary, and Pascal Bongard as the iron handed Master of Ceremonies, outclass the young star with a world of talent and experience. The rest – the players and gamblers at the secret game – are a finely cast group of thespians that give the background a richness that is mesmerizing to watch. Helmer Babluani gives “13” a look that we rarely see used in films these days. With cinematographer Tariel Meliava, the director utilizes black-and-white Cinemascope photography that gives his work a film noir look reminiscent of the 1940’s but with an excitement that is thoroughly new millennium. The look of the film, the dramatic presentation of the deadly game, at its core, and the assured weaving of its story make this a quite unique film experience. This unconventional yarn may not have mainstream audience appeal but it certainly does for an avid film buff like me.