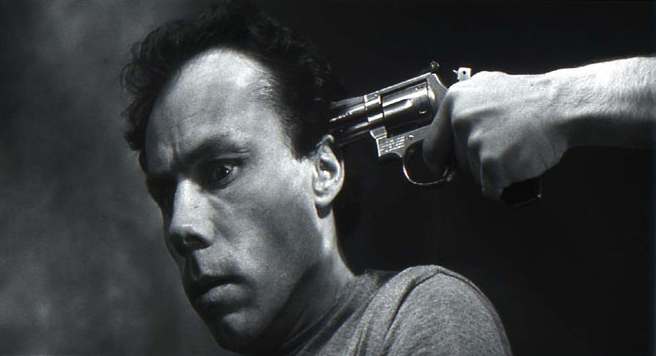 Sebastien (Georges Babluani) is the sole breadwinner for his impoverished immigrant family in France. Fate, though, is about to take a hand in his life when a mysterious packet, containing a train ticket, hotel reservations and cryptic instructions, fall into his possession. He assumes the identity of the now-dead recipient of the packet and follows the instructions but he is not prepared for what fate holds in store in 13 (Tzameti).”

While working a roofing job, Sébastien (George Babluani) overhears his employer, the seriously drug-addicted Jean-François Godon (Philippe Passon), speak about an engagement that will make him some serious money and an envelope that will arrive with its instructions. When Jean-François ODs on morphine rather than face the mission, Sébastien takes the envelope and its contents, a train ticket and prepaid Parisian hotel reservations, and throws himself into the unknown of "13 (Tzameti)." Young Georgian writer/director Géla Babluani has made a stylish, bleak film noir where men either have little hope or so much money it has perverted their souls. "13 (Tzameti)" is like an extreme art house version of "Hostel" with the point of view of its own environs. It also sports a cooler, Eastern European take on the dusty hot Spanish "Intacto," which, while more supernatural in its exploration of luck and fate, also features those willing to go underground to gamble their lives for fabulous wealth. Sébastien sets off on his mystery tour with a new, more menacing look, all squinty-eyed and Beatle cut and black leather. As he gets instructions for each new leg of his trip, the cops follow, but he loses them at a crossroads where a car pulls up, its driver signaling with a gothic-fonted '13.' That will be Sébastien's number in a game where the winner takes all and its unlucky association will prove ironic. Babluani has made a film in three acts and while his set up is intriguing and location exotic, it is the central act that is loaded with tension. Sébastien proves smarter in his ability to deal with both the criminal underworld and the cops on his tail than we'd expected, but when he does so in the film's third act it's all rather anticlimactic because Babluani has made Sébastien little more than an observant reactor to his surroundings rather than a character with depth. And yet "13 (Tzameti)" is a film full of great male faces, beautifully framed in black and white closeups, like Diane Arbus subjects shot by Richard Avedon. We do get fleeting senses of character from some of these supporting players, like Aurélien Recoing's ("Time Out') murderous Jacky and Vania Vilers's ("Truly Madly Deeply") feral Mr. Schlondorff. Also vivid are men who champion them, like Sébastien's backer Alain (Fred Ulysse, "Son frère"), all civilized cravat and tweedy jacket, and a manic, huffing gambler who would have been played by Peter Lorre in the heyday of noir. Less a character than a device, Pascal Bongard's ("It's Easier for a Camel...") master of ceremonies helps drives the tension with his barked pronouncements. If Babluani does not invest his central character with much humanity, he sure knows how to invoke the emotion of a place, from his stark oceanside Georgian town to the wind which travels through a Georgian house, rippling through sheer curtains, slamming shutters shut. The central act's manor house forest setting (precluded briefly by a stop that could have doubled for "Hostel's" torture set) is beautiful, yet made somehow sinister by the cluster of vehicles parked all around it. Trains and subways have never felt more ominous. And one would be remiss not to mention the truly great suspense thriller score, it's piano, flute and cymbals darting around a middle eastern theme. With "13 (Tzameti)," Géla Babluani proves himself an auteur with a cool eye and a jazzy ear. If he can inject some soul into his work he could be formidable.

Debut feature film helmer/scripter Gela Babluani creates a tale of suspense that brings 22-year old Sebastien into a world that rivals the one depicted in Michael Cimino’s 1978 film, “The Deer Hunter.” Sebastien struggles to support his family and takes a roofing job with sickly Jean-Francois Godon (Philippe Passon), a man who is anxiously waiting for the arrival of instructions that could net him a load of money. The awaited packet arrives but too late for Jean-Francois, whose failing health and drug abuse finally get the best of him. His wife, Christine (Olga Legrand), finds the cryptic instructions and promises them to her husband’s friend but a sudden breeze blows the envelop into the hands of unsuspecting Sebastien. The young man reads the mysterious instructions and, since his employer is now dead and unlikely to pay Sebastien for his work, decides to follow the clues and assume Jean-Francois’s identity. Unbeknownst to the impostor, the police are also very interested in where Sebastien now heads. He is followed by the cops but unknowingly slips through their fingers when he receives new instructions. He makes his way to a secret meeting place but still does know what is held in store for him. He arrives at a scene fraught with testosterone-infused tension and learns that he is to be Contestant #13 in a multiplayer tournament of a deadly game of Russian roulette. There is much more to “13” than the extraordinarily tense game of Russian roulette, with a twist. The multiple players are each given a revolver, one bullet and line up in a circle, one behind the other. They are ordered to load the single cartridge by Master of Ceremonies (Pascal Bongard), spin the cylinder and place the barrel at the back of the head of the man in front. The Master counts “one-two-three” and all the players pull the trigger at the same time – except for Sebastien. A tense moment ensues as the young man is, loudly and emphatically, told that he must pull the trigger or be shot. He enters the next round and the next and the next…. As I said, there is a lot more going for “13” than just the harrowing game of Russian roulette – and I don’t mean to denigrate the game by using the word just.” The deadly contest represents the film’s most tense and gut-wrenching moments, especially as it becomes a dispute between Sebastien and his main opponent, the top player in the murderous tournament, six-time winner Jacky (Aurelien Recoing of “Time Out” fame). When the games end, Sebastien faces a change of fate and fortune. Part two takes on a more ironic form as the story weaves things in a way that keep you guessing and wondering to the end. The film’s central figure, Georges Babluani, is an enigmatic figure and overshadowed by the excellent cast surrounding Sebastien. Aurelien Recoing, as his tough, unflappable adversary, and Pascal Bongard as the iron handed Master of Ceremonies, outclass the young star with a world of talent and experience. The rest – the players and gamblers at the secret game – are a finely cast group of thespians that give the background a richness that is mesmerizing to watch. Helmer Babluani gives “13” a look that we rarely see used in films these days. With cinematographer Tariel Meliava, the director utilizes black-and-white Cinemascope photography that gives his work a film noir look reminiscent of the 1940’s but with an excitement that is thoroughly new millennium. The look of the film, the dramatic presentation of the deadly game, at its core, and the assured weaving of its story make this a quite unique film experience. This unconventional yarn may not have mainstream audience appeal but it certainly does for an avid film buff like me.