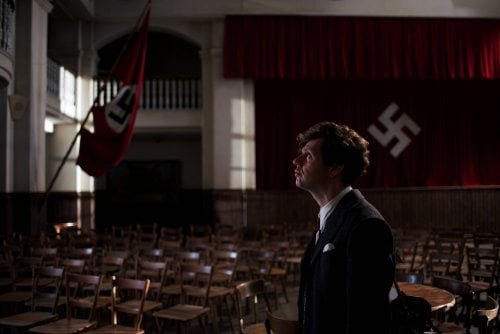 In 1933, Hitler came to power in Germany and we know how that turned out. But, in 1939, a carpenter named Georg Elser made the decision, alone, to get rid of the Nazi symbol of oppression and secretly planted a bomb that, almost, ended, before it began, the war that would embroil the world in “13 Minutes.”

In 1932, Georg Elser (Christian Friedel, "The White Ribbon") was a ladies man and musician trying to escape the harsh farm life he led under the thumb of his alcoholic father. Called back home to help keep his parents from financial ruin, Georg witnesses the rise of Nationalism overtaking his home town. He falls in love with Elsa (Katharina Schüttler, "A Coffee in Berlin"), a woman married to brutal drunk Erich (Rüdiger Klink), but when he sees his Communist friend Josef Schurr (David Zimmerschied) led away by Nazis, he realizes he must act. Using his skills in clock repair, Elser builds a bomb, hiding it in the Bürgerbräukeller where Hitler is scheduled to give a speech on November 8, 1939, then attempts to cross the border into Switzerland. He's stopped, suspicious items found on his person and brought before Head of police Arthur Nebe (Burghart Klaußner, "The White Ribbon") and Gestapo head Heinrich Müller (Johann von Bülow, "Labyrinth of Lies," "Frantz"). The bomb explodes and Elser learns he missed Hitler by "13 Minutes." The latest film from Oliver Hirschbiegel ("Downfall") has much to recommend it, but suffers from both its structure (screenplay by Fred and Léonie-Claire Breinersdorfer) and its romance. The film begins with the suspenseful bombing, then flashes back, a questionable choice which removes a lot of tension. The story is driven by the Hitler's refusal to believe the attack could possibly have been planned and executed by one man, Elser's confession meaningless in the continued torture he would endure. Friedel is compelling as the dreamy lover turned resistance fighter, as is Klaußner, conflicted in Nebe's early belief of Elser's story. Newcomer Anna Holmes is also notable as Nebe's sympathetic secretary, communicating much with few words. But the romance which consumes much of the film's midsection is problematic, Elsa an unlikable character unwilling to take a stand. Their attraction makes little sense outside of the bedroom. Grade: