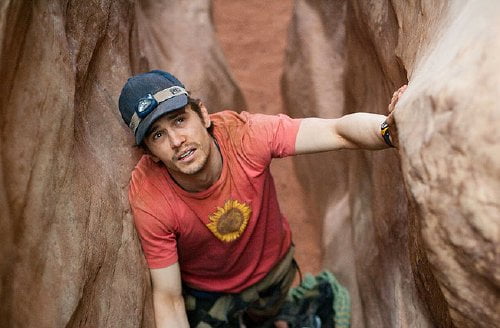 Aron Ralston (James Franco, "Milk," "Howl") figured himself for a self-sufficient adventurer when he set off alone for a weekend hike into the canyons near Moab, Utah. In the middle of nowhere, he meets two less experienced young women and convinces them to let him be their guide. Strategically straddling two rock faces over an underground pool, Christie (Kate Mara, "We Are Marshall," "Transsiberian") notes it's a good thing these old rocks don't move. 'Oh yes they do,' Aron replies, 'let's just hope it's not today.' More prophetic words were never spoken when, after parting ways, Aron tumbles into a canyon crevice with a dislodged boulder which traps him by his crushed arm for "127 Hours."

Cowriter (with "Slumdog Millionaire's" Simon Beaufoy)/director Danny Boyle follows his sprawling tale of one young Indian street boy's odyssey to beat the odds for love with a deeply personal and interior journey of a young American hiker coming to grips with his attachment to the human race. Boyle's Oscar winning Slumdog production team returns to recreate the environs and imaginings of Ralston's experience while James Franco pulls us inside of it in a sure to be Oscar-nominated performance, his third of the year, all good. This intimate film is a far superior work to the Oscar winning crowd pleaser of two years ago. Just how does Boyle take this well reported story and keep it interesting? Except for the day or so leading up to the accident, the entire film takes place with Franco pinned down by one arm in a very small space. The challenges are not unlike those recently featured in the fictional "Buried," which took place entirely within a coffin. But Boyle's a better and more experienced director and meets the challenge head on, beginning with an opening title sequence that stresses the loud sounds and crowds of urban life, with people all moving vigorously in a triptych three-way split screen to driving music that carries over to our first view of Ralston. He's prepping for a trip and Boyle tells us much and foreshadows more very efficiently. We see Aron's hand from within the cupboard reaching for items, but missing a Swiss Army knife, which is left behind. We hear mom on the phone, left to go to the answering machine, then hear Ralston's door slam shut as the kitchen faucet drips. Aron speeds out of the city to sleep under the stars. We're in the hands of a filmmaker who inventively packs loads of information into the seemingly mundane. We get the sense of exhilarated freedom and expertise Ralston feels in these canyons. He rides a bike like a madman, cackling with glee when he tumbles. His sly courtliness almost obscures his show offiness when he meets Christie and Megan (Amber Tamblyn, "The Sisterhood of the Traveling Pants"), agreeing to meet them that night at a party, marked by a giant Scooby Doo. He's still sailing when he takes off alone. And then everything changes in mere seconds. Boyle carves up Ralston's 127 hours like stages of grief, aided by the insights of Ralston's book, "Between a Rock and a Hard Place," and the actual videotapes the hiker made during his ordeal (Ralston allows few to see these, but shared with Boyle and Franco). The director has all kinds of tricks up his sleeve to keep us enthralled with Ralston's changing mind set, from the warp speed tracking shot back to Aron's car where a bottle of Gatorade lies in the back to imagined family visitations - present and future - on a couch. Scooby Doo pops up a couple of times, once as Aron imagines the party he's currently missing, later an ironic spectre. And Franco's performance is every bit as riveting as Boyle's devices. Frustration, perseverance, humor, reverie, regret and determination all factor in at different stages - the focus required to retrieve the dull blade he's been using to chip at the rock is rewarded with the satisfaction of completing the task, with his toes yet, as his inner voice tells his mom there was no way she'd know what her stocking stuffer would be needed for; the hysterical hilarity of his own situation that makes Aron emcee his own morning show; the realization that he chose his own situation, that this rock has been waiting for him. Then there is the scene we've been dreading. Boyle's already given us a taste with a disturbing view from within Aron's arm as he stabs himself to the bone to determine if he has a chance to cut it. It's a couple days later when he finally figures out what he needs to do and yes, it's gruesome, but also oddly joyful, like a bird taking wing. Franco's superb here, snapping a shot of his lost appendage before turning and stumbling away. Considering how remote Ralston's accident site was, he seems to come across other hikers a bit too quickly, but the way Franco asks for help tells us a very different man is leaving that canyon than entered it. (Boyle's laying on of the family members is also not quite as successful as some of his other ideas, especially the future son.) Clémence Poésy ("Harry Potter and the Goblet of Fire," "Heartless") plays the girlfriend remembered longingly, left casually. The film looks magnificent, the canyon locations dramatically orange contrasted with blue. Cinematographers Anthony Dod Mantle and Enrique Chediak are alternatively all around Franco in a very small space (that they nonetheless make interesting) or flying through the air (like that tracking shot that zooms away from the newly caught Ralston through the crack of the canyon, high, high into the air, underlining that even a search plane couldn't have spotted him). Jon Harris ("Kick-Ass") cuts the images together seamlessly and for maximum effect and A.R. Rahman's score maintains a hint of Indian influence that's completely appropriate. "127 Hours" sounds like a movie you wouldn't want to see on the surface but Danny Boyle not only makes it work, he makes it sing.