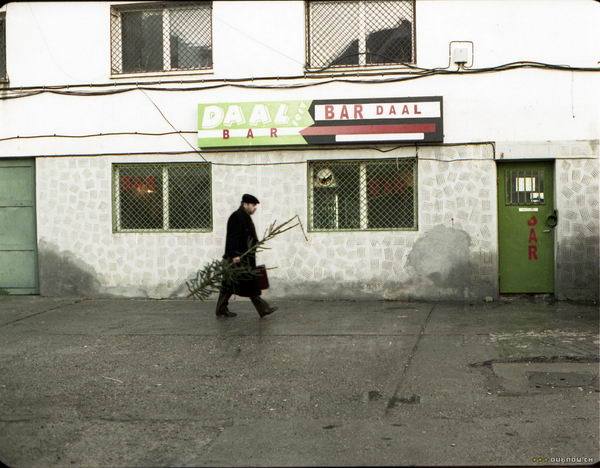 Sixteen years after Romanian dictator Ceausescu fled his country on December 22, 1989, a sleepy town's TV station owner decides to mark the occasion on his "Issue of the Day" talk show. Inviting the town's history teacher, a known drunk, and its retired Santa Claus to join him, Virgil Jderescu (Teodor Corban, "4 Months, 3 Weeks and 2 Days") will debate just how revolutionary their little town was at "12:08 East of Bucharest."

During the past two years, Romanian films have won four prominent prizes at Cannes and Romania has become the place to watch for new talent. Writer/director Corneliu Porumboiu won the 2006 Palme d'Or for his first feature and this delightfully deadpan look at the need to believe in our own heroic tendencies is part gentle slapstick, part social satire and wholly humane. The first person we meet is Tiberiu Manescu (Ion Sapdaru, "4 Months, 3 Weeks and 2 Days"), roused from a drunken stupor by his wife, who demands that he bring his entire salary home with him today. Manescu spends his morning trying to cadge more liquor while keeping his debtors at bay and keeping his wife from leaving from him. He learns that he has once again insulted a Chinese shopkeeper that lives among them the night before at the bar. It is Chen who bails him out. Meanwhile, Old man Piscoci (Mircea Andreescu) is being asked to reprise his Santa character for the upcoming holiday and spends his day assembling a costume, also with then help of Chen's shop. Jderescu spends his morning assembling pretentious quotes and fretting over his mistress Vali's (Cristina Ciofu) decision to spend New Year's Eve in Bucharest rather than working his evening newscast. This buildup portrays the interconnectedness of small town life and the drabness of post-Soviet Eastern Europe ('Nice tree!' is noted repeatedly as people drag scrawny shrubbery about). The three main characters are fleshed out with gentle humor. The real meat of "12:08 East of Bucharest," however, is found in Jderescu's station, a facility of Wayne's Worldian professionalism. A folk band plays in cramped quarters before a backdrop of the town hall, photographed by an engaged cameraman with hand held video. 'Cut!' screams Jderescu - 'Use the tripod!' - a bit of self mockery by Porumboiu, who has been using, most effectively it should be noted, the deadpan visual style of motionless camera parked in the middle of the action, each change of scene one extended take. As "Issue of the Day" begins, we view through the eye of that student camera guy ('You all learn from me then leave for Bucharest!' shouts Jderescu) who cannot resist pans, zooms, takes and jiggles. Like a small town car salesman, Jderescu slickly introduces his guests, slides in some dubiously contextual quotes from the likes of Plato, and introduces his subject - was their small town part of the revolution? In other words, was anybody protesting before Ceausescu fled at 12:08 sixteen years earlier. Manescu immediately makes the claim that he and three other teachers (two conveniently deceased, one immigrated to Canada) were out in the square that day around 11 a.m. Piscoci makes pleasantries ('Hello,' 'Happy Holidays') and makes paper boats. High hilarity ensues as Jderescu tries to maintain pseudo intellectualism while one call in viewer after the next accuse Manescu of lying ('he was at the corner bar drinking like a pig'). Backed into a corner, Manescu refuses to change his claims. Piscoci tells the rambling tale of a minor makeup in a long suffering marriage. And doesn't Porumboiu find just the right note of hushed symbolic beauty to send us out on. "12:08 East of Bucharest" is being distributed by Tartan Films, who led the U.S. charge by presenting "The Death of Mr. Lazarescu" last year. They are both masterpieces of understatement and the understanding of the human condition.