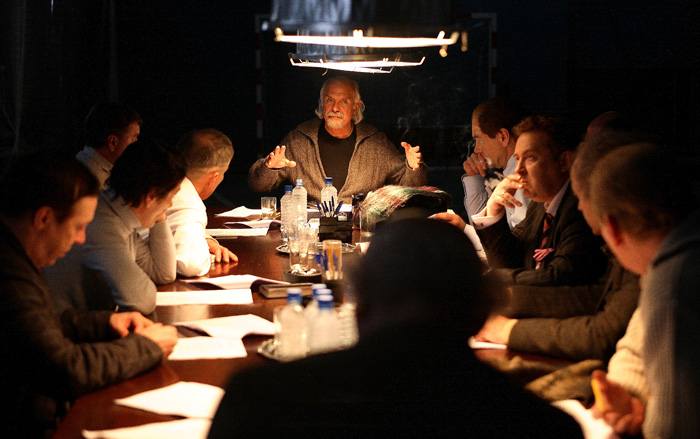 A dozen men, from all walks of Muscovite life, are selected as the jury for the trial of a Chechen teenager accused of murdering his Russian Army officer stepfather. As they deliberate to decide the boy’s fate, all are convinced of his guilt and are ready for a unanimous vote. Except for one man, whose doubt pits him against the rest as he tries to change their collective mind in “12.”

Oscar-winning Russian filmmaker Nikita Mikhalkov (for 1994’s Best Foreign Language pick, “Burnt by the Sun”) takes on an American classic with his modern envisioning of Sidney Lumet’s 1957 feature debut, “Twelve Angry Men.” At its core, “12” is identical in plot and storyline to the ’57 movie, using the same devices as murder weapon (a unique knife), witnesses and analysis of the evidence by the jurors ­ who match almost exactly the jurors in the original. Where Mikhalkov makes “12” his own is his providing back-stories for all of the jurors and the boy awaiting their verdict. He also makes the story contemporary to Russian life, focusing on the all too recent civil war in Chechnya and its impact on society. These additions to the original story succeed in making “12” worth seeing on its own merit. The characters are numbers, not names, as jurors One through Twelve, but, as the back-story for each plays, they flesh out into people. The all-walks-of-life characters help develop the insight into socio-political life in Russia while telling the story about a teenaged boy, accused of the brutal murder of his stepfather, whose life is held in the balance by these 12 men. Initially, as the 12 jurors are led to their deliberation room ­ beautifully conceived in a local school gymnasium ­ all are convinced of the boy’s guilt, are ready to vote as such, pack up and resume their lives. As the foreman calls for a show of hands vote for guilty, one man questions the decision as too quick. They need to talk about it. This begins the slow, deliberate` shift as the man convinces others, one by one, that there is reasonable doubt about the teen’s guilt. It almost ends the same way as the Lumet film but, again, Mikhalkov gives it a twist that makes this a contemporary Russian fable. Acting is solid across the board with each thesp giving dimension to their characters. Techs, like set direction and production design, are first rate, as is the lensing by Vladislav Opelyants. My one complaint is that the music, by Eduard Artemyev, is uneven and, sometimes, out of place. The draw, for me, to “12” was its relation to the ’57 film. “Twelve Angry Men” is one of my favorite films and I am intimately familiar with it. Nikita Mikhalkov (who co-scripted the screenplay with Vladimir Moiseyenko and Aleksandr Novototsky) makes the well-known material fresh and new.