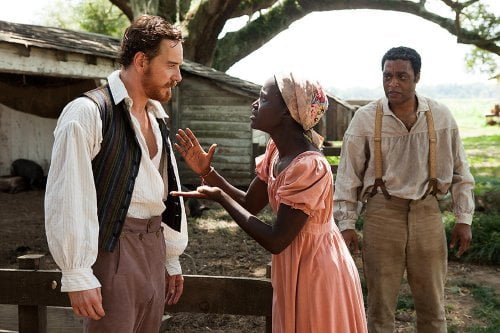 In 1841, Solomon Northup (Chiwetel Ejiofor, "Dirty Pretty Things," "Kinky Boots") was a free black man with a home and family in Saratoga, NY. One day while strolling through town, a friend, Mr. Burch (Christopher Berry, "Django Unchained"), introduces him to two men who are looking for a musician for their circus which will be traveling south to D.C. Brown (Scoot McNairy, "Argo") and Hamilton (Taran Killam, SNL) shower him with praise and high wages, but on the night he is to return home, he's drugged, awakens in shackles and is sold in the south to spend "12 Years a Slave."

1841, Saratoga Springs NY: Solomon Northup is a free black man who is a gifted violinist and is well-thought of by the community. He packs his wife, with their two children, off to the home of a wealthy white family where Anne (Kelsey Scott) works as a live-in cook. She will be away for weeks so, when he is offered a chance to perform in Washington DC at good pay, he jumps at it. It will be a move that Solomon will regret as “12 Years a Slave.” Think “Django Unchained” but without the dark humor. In many ways, “12 Years a Slave” has many parallels to the earlier Quentin Tarantino film, mostly by way of the violence against the black slaves of that Antebellum era in southern United States. Director Steven McQueen, with his third film, delves into the pain, agony and suffering by those enslaved blacks who are bought and sold, like cattle, to cruel and uncaring masters. It is an epic story that stirs the intellect but not one that stirs the soul. The unrelentingly violent life of a slave is deeply disturbing in a way that makes you look askance. Scripter John Ridley adapts Solomon Northup’s account of his harrowing experiences (also called 12 Years a Slave, published in 1853) during those titular years. An educated man, Solomon tells his kidnappers that he is a free man and demands to be allowed to leave, earning him a vicious beating from his white captors. He soon learns that an educated and literate black man is unacceptable in the South and, after a brutal, skin-shredding whipping, he learns to keep his mouth shut and eyes looking down. The story follows Solomon as he is sold to a succession of owner, including the kindly first master, Ford (Benedict Cumberbatch), who sees Solomon’s intelligence and treats him well. Not so the plantation’s overseer, Tibeats (Paul Dano), who has murderous intentions for Northup, nor his next owner, Edwin Epps (Michael Fassbinder), an alcoholic sadist who treats his slaves any way he wants. Solomon meets many people, white and black, free and slave during his 12 year ordeal where justice is just a word for those enslaved. Chiwetel Ejjofor plays Solomon close to the chest as he learns the difference between being free and being a slave. Solomon is a reactive figure in the film, by necessity, as he must withdraw into himself, suffering his misery and loss of his family from within. It is an intense performance that will earn the actor award buzz. Michael Fassbinder, as the sociopathic Epps, brings it over the top with his brutality and his stupidity as a hateful master. Sarah Paulson, as Epps’s equally sadistic wife, gives a chilling performance as a woman lacking humanity. There are many smaller roles for the huge ensemble cast, including film stars like Brad Pitt, Alfre Woodard and Paul Giamatti, playing brief cameo roles. The production of “12 Years a Slave” is by far the most ambitious work for director McQueen who makes a strong statement against the still-ongoing issue of slavery. The depiction of the treatment of slaves in the South, before the Civil War permanently ended the institution in the United States, is shown with the disturbing reality. The violence that man uses against his fellow man is unbelievable but, sadly, true. No punches are pulled in the telling of Solomon Northup's disturbing story.