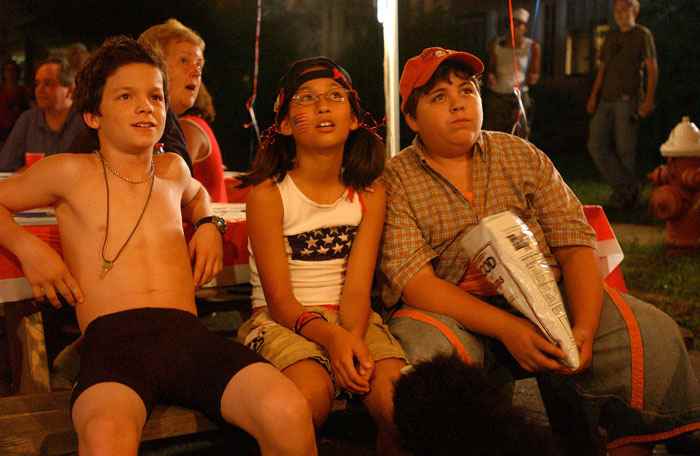 When Jacob Carges' (Conor Donovan) loses his twin brother Rudy in a tragic accident, he and his two friends Leonard (Jesse Camacho) and Malee (Zoe Weizenbaum, "Memoirs of a Geisha") will all explore that painful place between childhood and adulthood known as adolescence. They are all "12 and Holding."

Director Michael Cuesta both wrote and directed his feature debut, "L.I.E.," but for his sophomore work, which also looks at suburban tweeners, he directs from a script by Anthony Cipriano. Cipriano's script is one of those overly architected affairs where everything dovetails too neatly. "12 and Holding" makes one want to reevaluate "L.I.E." to see whether it was a lousy film hiding behind a great Brian Cox performance because this one plays like a sitcom directed by Larry Clark ("Kids," "Ken Park"). On the twins' birthday Rudy disparages his hockey-masked brother for asking for sports gear for a game he doesn't play, then calls him a chicken for not going out at night to protect the tree house they used to dump a bucket of urine from earlier in the day. Rudy's target, bullies Jeff (Martin Campetta) and Kenny (Michael C. Fuchs, "Stuart Little 2"), swore to return and destroy the Carges' hideaway. Although Jake holds back (and lifts his mask when his brother climbs out the window, revealing a strawberry dagger covering half his face), Rudy is joined by buddy Leonard. On watch, the two inadvertently fall asleep. Not knowing the tree house is occupied, Kenny and Jeff lob Molotov cocktails at the structure. Leonard manages to escape with injuries, but Rudy is lost. Jake, who has always felt like the less loved twin, is now caught between parents acting out their grief. Jim Carges (Linus Roache, "Find Me Guilty") sells the land where his son died to developers and manically cleans the house while his wife, Ashley (Jayne Atkinson, "The Village," "Syriana," "24's" Karen Hayes), stays in bed. When they learn that Kenny and Jeff have received one year sentences as juveniles, Ashley is beside herself, wishing death for the kids. Jake reacts by becoming his mother's avenger, visiting the detention center where only Kenny will come out to suffer his verbal abuse. Meanwhile, Jake's two friends have their own trajectories. On the day of Rudy's funeral, Malee meets Gus (Jeremy Renner, "Dahmer," "North Country") in her mother's psychotherapy office. When the kids bike over to watch the construction taking place where the tree house used to stand, Malee spies a shirtless Gus and becomes smitten, taking him picnic lunches, dressing more and more provocatively and eventually breaking into his apartment. Overweight Leonard, who has lost his sense of smell during his fall, learns to love apples for their texture and begins a new health regimen, causing his food-obsessed mother Grace (Marcia DeBonis, "L.I.E.," "13 Going On 30") to take her own feelings of guilt and inadequacy out on her son. When Grace makes tubby hubby Patrick (Tom McGowan, TV's "Frasier," "Everybody Loves Raymond") take their girls on his annual father/son trip, Leonard uses their absence to take radical action to get through to his mom. While Cipriano's script has some few subtleties to it (Jake is connected to Malee's Gus through the half-obscured face of a young girl who is the root of Gus's troubles and to Leonard's story through underground interment), Cuesta cannot maintain an even tone or sustain even performances. The film plays like some weird hybrid of sitcom (complete with bouncy comedy score in uncomedic places), After School Special and Indie flick. In the main role, Conor Donovan is never convincing - when mom declares she wants a kid dead, then later expresses joy at one of the juvie's suicides, he flips on and off like a light switch. The kid can't deliver his screamed accusations at Kenny with any naturalism (perhaps because the dialogue, as written, doesn't work either). Weizenbaum and particularly Camacho fare better, but neither is as good as Fuchs, who gives the most complex and sympathetic characterization with far less screen time. The adults are all over the map as well, with Atkinson playing to the rafters and Roache bugging out a bit too weirdly. Marcia DeBonis is the most interesting and ultimately realistic of the parents, blessed with the best of the three storylines. Annabella Sciorra ("Find Me Guilty") is OK as Malee's self-absorbed, angry single mom and Jeremy Renner maintains a likability as he walks through a minefield of a plotline. "12 and Holding," which features a dad (McGowan) who eats junk food hearing his hospitalized son's prognosis, an adopted black child who reacts like a puppy to his step-sibling's mood swings and a boy who hides his birthmark behind a mask often offers dime store psychology in lieu of real human drama. It's obvious and uneven and its big climatic moment feels dishonest.