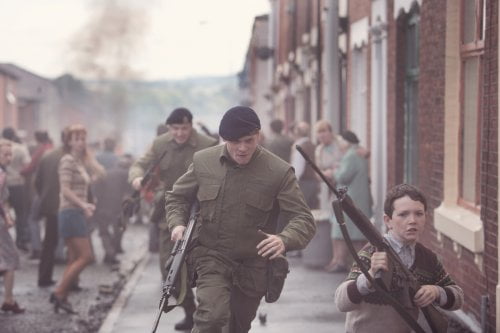 Gary Hook (Jack O’Connell) is newly recruited into the British Army and, like the rest of his unit, expects to do easy duty in West Germany taking part in the Cold War with the Soviet Union. But, he and the others get bad news: they are going to the hot zone in Northern Ireland because of the Troubles in “’71”

Gary Hook (Jack O'Connell, "Starred Up," "Unbroken") has nothing but his little brother, still living in an orphanage, when he leaves his home for a stint in the British Army. But he's not sent to Germany as he expects, instead told his regiment is to be sent to Belfast to assist with a 'deteriorating security situation' in "'71." Talk about behind enemy lines! British television director Yann Demange and screenwriter Gregory Burke take a thoroughly new approach to look at the early days of Ireland's Troubles, by casting an innocent in the garb of an invader into dangerous territory where allies may be enemies and enemies allies. Confining most of the action to the maze-like Divis Estate, an IRA stronghold with its own muddled allegiances, turns the film into a political haunted house movie, a dark and scary place where anything might be around the next corner. After a brief foray into boot camp, Hook settles into his barracks, shared by a whispered about but not socialized with intelligence operation led by Captain Sandy Browning (Sean Harris, "24 Hour Party People's" Ian Curtis). Hook's regiment is given an overview of Belfast's dividing lines, then told that they'll make what appears to be a routine pass into the city, referred to as 'reassuring the Paddys,' and that riot gear should be left behind. Their commanding officer, Lt. Armitage (Sam Reid, "Belle"), himself a new recruit, is a naive if essentially well-meaning posh. But when the lads get into town, older, more experienced men begin what appears to be an aggressive shakedown and the residents attack, pushing against the soldiers and throwing rocks. Told to chase down a young boy (Aaron Lynch, "Boogaloo and Graham") who's grabbed one of their rifles, Hook and his comrade Thommo (Jack Lowden) become isolated and Thommo's shot and killed. Cut off from his retreating regiment, Hook does the only thing he can, hunkering down in a dark alley. He's found after dusk by a swaggering young boy (Corey McKinley) who asks if he's a soldier and tells him he'll lead him to safety, taking him to a pub where IRA dissidents are constructing a bomb in the back room. A devastating accident escalates tension, fingers pointing at IRA leader Boyle (David Wilmot, "Calvary"). As Hook encounters both friends and foes, the ineffective Armitage is tasked with finding him by an increasingly agitated Browning, who eventually takes matters into his own hands. Their are quite a few factions to keep track of here, and with not everyone being what he appears to be, a fog of war descends on audience and Hooks alike. O'Connell creates a character to care for here, a man who's decency has been established in the care he extends to his brother; one who's confusion during the riot, more perhaps by the actions of his fellow soldiers than by the people trying to eject them, is shared by us. His look of utter horror and shock when Thommo is shot in the face is a reflection of our own. He's scared, cautious and mistrustful, but also resourceful. And when one of his eventual captors is taken out by his own (neatly paralleled to Thommo's execution by the number of shots fired), it's his humanity in the face of more senseless violence that registers. When you get down to brass tacks, "'71's" message is that we send innocents to war pumped with marketing slogans designed to obscure the truth, that those with the upper hand, be it through power, money or class, will always use it to hold those who don't down. Is it any surprise that the man made lieutenant over Hook appears to be his equal in everything but birthright? Grade:

Tyro director Yann Demange and newbie scribe Gregory Burke create a historic drama that follows one young man, Gary, as he must face the fog of war without ever leaving the United Kingdom. It takes place during that period of time in the 70s when the IRA sought to take over the English controlled Six Counties in the north. Hook’s platoon is ordered into a Catholic neighborhood but, instead going in heavily armed and armored, they are ordered by their commander, Lt. Armitage (Sam Reid), to go in as friends not foes. Things do not go off as planned and a riot quickly breaks out, separating Gary from his comrades. He faces an arduous and deadly odyssey, using his training and wiles, to get back to his unit alive. Demange and Burke, together, gives us a day in the life story of one young man during the Irish turmoil of the 1970s. The focus is on Gary and his daunting journey and Jack O’Connell proves himself to be capable young actor with a real future (just take a look at “Stepped Up” and “Unbroken”). O’Connell shows the hopes and fears – mostly fears – that Gary feels as he treks across a hostile land and is helped by the kindness of sympathetic strangers, though most want his head on a pole. You have to pay close attention to the several story threads as they involve different views, motivations, and loyalties for those involved. There is the British army, represented by Hook and his comrades, the IRA, the Sinn Fein (the radical arm of the IRA), loyal Protestants and equally loyal (to the IRA) Catholics, and a secret British force operating under the radar. They are working at cross purposes but are all looking for Hook – with different intents in mind. The deftness of the direction and complex story is complimented by production design and costume that capture the period perfectly. Lensing, by Tat Radcliffe, is fast and fluid, making the foot chases through the streets of Belfast tense and exciting and helps ramp up the tensions of Gary’s plight. All in all, “’71” is a well-crafted, tense film and an excellent debut for its authors.