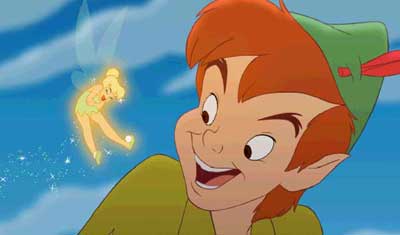 In 1953, Disney's "Peter Pan" hit the bricks and brought pleasure to millions of kids of all ages the world over. It has taken nearly a half-century for the follow up but it is still all about "faith, trust and pixie dust" as the Mouse House takes flight once again in "Return to Never Land."

Wendy Darling is all grown up with two children of her own, but happiness is tentative in a London being blitzed during World War II. With a husband gone off to fight for his country, Wendy tries to keep childhood alive by telling tales of Peter Pan and Captain Hook which are loved by her youngest, Danny. But Wendy despairs over Jane, a young girl grown adult before her time, until Jane's eyes are opened when Hook kidnaps her one night in "Return to Never Land."

This first theatrical release from Walt Disney's Television Animation arm in Australia, which produced the direct to video sequels to "The Lion King" and "The Little Mermaid," is a surprisingly good looking animation that can take its place next to "Peter Pan" with pride. Paired with the delightful 1948 vintage short "Pluto's Fledgling," "Return to Never Land" is a fine family offering.

Jane is a unique Disney heroine with her stylish blunt cut protected by the steel helmet she wears when outside her London row house. The practical miss makes her way through an air raid to the family bomb shelter where she presents her brother with his birthday present - a pair of socks. Exasperated, mother Wendy immediately turns them into puppets. Later that night, Jane finally goes too far, incurring her mother's anger when she disillusions Danny by declaring Peter and his cohorts childish make believe.

Then she's swept away by Captain Hook and brought to Never Land to be held ransom for the return of his treasure. She's rescued by Peter, of course, but finds the Lost Boys childish and declares a disbelief in fairies, Tinkerbell's undeniable presence notwithstanding. This presents a problem, as the only way out of Never Land is by flying and Jane desperately wants to return home and make amends. Hook spies an opening and makes a deal with Jane to use Peter to find his treasure in return for passage to London.

While the storyline sounds like a retread of the original, there are enough new twists to make a second helping enjoyable. Modern touches, such as songs by Jonatha Brooks ("I'll Try") and They Might Be Giants ("So To Be One of Us"), and a computer generated pirate ship, don't detract from the story's period feel. The animation of the London sequences are lush and warmly lit. Dark silhouettes of Pan and Hook are made to pop with shining white eyes and teeth. Hook's ship descends over Jane's house like a mothership and its navigation out of London amidst incoming bombers makes for a breathtaking scene.

Never Land is modernized with brighter colors and a new foe for Hook - an giant octopus that 'pops' its tentacle suckers in a beat reminiscent of the old crocodile's clock. The Lost Boys now seal their pact with a vaguely gross spit slap, rendered with full ick factor.

Director Robin Budd (TV's animated "Beetlejuice") paces his film well for younger attention spans at a trim 72 minute running time. Editor Anthony Rocco employs dissolves to pair Danny with Pan and Jane to both Tinkerbell and her mother. Animation work, with the exception of a cheesy kaleidoscope segue from London to Never Land, is delightful. Joel McNeely's score is rousing, but never obvious or cloying.

"Return to Never Land" is the exceptional sequel with pleasures of its own for a new generation.

Wendy (voice of Kath Soucie) is all grown up and the mother of two just as England is entering the war against its Nazi oppressors. Her husband, Edward (voice of Roger Rees), is sent off to the far-flung reaches of the empire to fight the Germans and, as he is leaving, he instructs his eldest, Jane (voice of Harriet Owen), to look after her mom and, especially, her little brother Danny (voice of Andrew McDonough). Jane takes her grown up role very seriously and does her bit for the war effort. When she hears her mom tell Danny the old stories about Peter Pan, she haughtily dismisses them as silly and immature fantasy tales.

The savagery of the Nazi blitzkrieg on London forces the county's leaders to ship all of that city's children off to the countryside for their own protection - including Jane and Danny. Jane is furious at being pulled from her responsible position of taking care of her mother and brother and cries herself to sleep in full view of "the first star to the left." She is awakened by a noise in the middle of the night and, suddenly, finds herself in the clutches of none other than Captain Hook (voice of Corey Burton), who spirits her away aboard his magical flying ship. The pirate, mistaking Jane for a young Wendy, plans to use the girl as bait to lure Peter Pan (voice of Blayne Weaver) into a trap and put an end to his boyish nemesis for good.

Jane does not believe her eyes when she sees all the goings on in Never Land and thinks it is all just a dream. Slowly, as she gets to know Peter, Tinker Bell and the Lost Boys, she realizes that she isn't sleeping and all that happens is real. She is duped by the conniving Captain Hook into betraying Peter after she declares to Tinker Bell, "I especially don't believe in fairies!" This devastates the diminutive Tink whose very existence depends on kids believing in her. Suddenly, Jane has to face the fact that Peter and the Lost Boys are in the clutches of the dreaded pirate captain and it is up to her to save them. It all comes down to faith and the question is: Does Jane have that faith?

My expectations were not very high before attending the Saturday morning screening of "Return to Never Land" and I expected little more than a rehash of the original "Peter Pan." When the lights came up in the theater about 75 minutes later, I became a convert. This long awaited follow up to the '53 classic establishes itself as a solid entry in the pantheon of Disney animated features. It may not be the company's very best, but it certainly reps the high quality that we have come to expect from the anime giant.

Tech credits are superior across the board. The animators, led by Robin Budd, have done their homework extremely well in recreating the tone and the look of the original. They also put a fresh face on the story - instead of Wendy lamenting over having to grow up and stop being a kid, we have her daughter, Jane, growing up too fast and learning that you can still be a kid even when you grow up. Both traditional cel animation and computer graphics are used, seamlessly, to render a work that is equal to or better than the original. The CGI is especially well utilized in providing fluid "camera" work that is incredibly detailed. One sequence, in particular, has Captain Hook fly his sailing ship over London straight through the middle of a German air raid and it is visually stunning. The rest of the film isn't this mind-boggling but sustains the same high standards.

Vocal talent, too, does a wonderful job of giving voice to the various characters. Corey Burton does a masterly job of recreating the speech of Captain Hook. Hans Conried first gave the captain voice way back when and Burton gives the needed transitional continuity, sounding eerily like Conried. The same goes for Jeff Bennett who parallels Bill Thompson's vocalization of Hook's lovable first mate, Smee. The rest of the vocal cast deserves their share of praise for making the fantasy real. On a different level is the creature that replaces the old crocodile that swallowed the clock - a giant octopus that hates pirates, especially those with a hook instead of a hand, and announces his presence with a rhythmic sucking noise as he keeps the captain on his toes.

The producers of "Return to Never Land" intro the film with the vintage Disney cartoon short, "Pluto's Fledgling," that has the doggie star teach a baby bird how to fly. It is a brilliant piece of traditional animation that will charm the pants off of you.

"Return to Never Land" will be a welcome addition to any animation collection, when it comes out on DVD and video, and makes a perfect companion piece to the original "Peter Pan." It is a real treat when you see something that turns out to be a wonderful surprise.