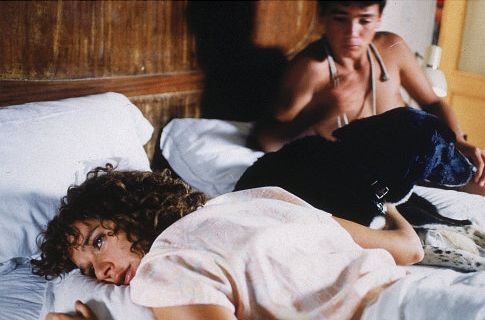 Pasquale's (Francesco Casisa) work and play are equally arduous, but he's surrounded by the beauty of the sun-drenched island of Lampedusa and his mother, Grazia (Valeria Golino, "Frida"). But Grazia, a manic depressive in a place unable to cope with such illnesses, also contributes to the harshness of her son's life in writer/director Emanuele Crialese's "Respiro."

I've admired Italian actress Valeria Golino ever since the then twentyish star gracefully but firmly checked director John Frankenheimer's overblown comments during a press conference for "Year of the Gun" and she's the main reason to see this familiar tale of a woman outcast by a small-minded society. Crialese does wonderful work with his actors in a stunningly filmic location, but his story is unoriginal and any new ideas underdeveloped.

Pasquale runs with a gang who snare small birds and engage in rock fights. When his mother arrives with younger brother Filippo (Filippo Pucillo) and plucks him from work for an impromptu trip to the beach, he's wary and becomes fully alarmed when Grazia disrobes to skinny dip in the sea. Grazia ignores Pasquale and Filippo's pleas to cover up because she declares there is no one there to see, but her husband Pietro (Vincenzo Amato, "Ciao America") passes on his fully crewed fishing boat and gives his boys a tongue-lashing for allowing their mother to embarrass him.

And so Crialese's film swings back and forth from moments of family warmth to displays of hysteria brought about by Grazia's unfettered actions. Grazia's desire to experience a sailboat turns into a public display when Pietro fights the boat's accommodating foreign owner. Filippo's win of a toy train set puts the family in a gregarious mood and Pietro's desire for Grazia is returned. When Pietro removes one of Grazia's dogs, presumably to put it down for unknown reasons (perhaps because it's taken his place on their bed?), Grazia frees the stray dogs kept corralled in an old fort (recalling De Sica's portray of canine misery in "Umberto D"). They promptly run into the village where the men shoot them dead and she's declared a menace by the women washing blood from the streets. Like the birds the boys cook up for snacks, freedom on this island is met with a harsh fate. The town demands that Grazia be sent to a Milan institution, but Pasquale hides his mother in a cave like a mythic siren. Pietro's mourning is respected by all and she's given a communal embrace upon her return.

Perhaps Crialese is celebrating individuality, but his expression of it is puzzling. He also appears to make a statement about machismo, with young boys commanding their elder women about (a subplot has Filippo 'protecting' his older sister Marinella (Veronica D'Agostino) from a young policeman she's taken a fancy too), but it is unclear whether it is a statement of fact or opinion. Pietro's placement of a Virgin Mary statue on the ocean floor when he believes Grazia has drowned could be symbolic of the Madonna/whore complex, which is also suggested by Grazia's "Malena"-like march down a street amidst a shunning townsfolk, but again, the director's intent is unclear.

Golino invests outrageous behavior with innocence and deftly traverses mercurial mood swings for her free but haunted character. The camera loves her freckled suntan and cloud of unruly curls and the actress glows whether her character is happy or in a delicate state of confusion. Casisa has a dreamy vulnerability as Grazia's protective son while younger Pucillo projects a pugnacious defensiveness. Amato makes Pietro's frustration palpable. D'Agostino's character isn't well defined.

Eva Coen puts Golino in simple house dresses they've made sexy, with one brown and aqua shift beautifully reflecting the landscape. Another red number is left crumpled on the sand like a blood stain. D'Agostino's fuller figure is emphasized with shirttail-tied blouses.

Cinematographer Fabio Zamarion is particularly adept with underwater imagery but the final shot chosen by Crialese, of a crowd of legs kicking around the reunited Grazia and Pietro, is an unappealing choice. Composer John Surman's new-agey jazz is, thankfully, used sparingly.