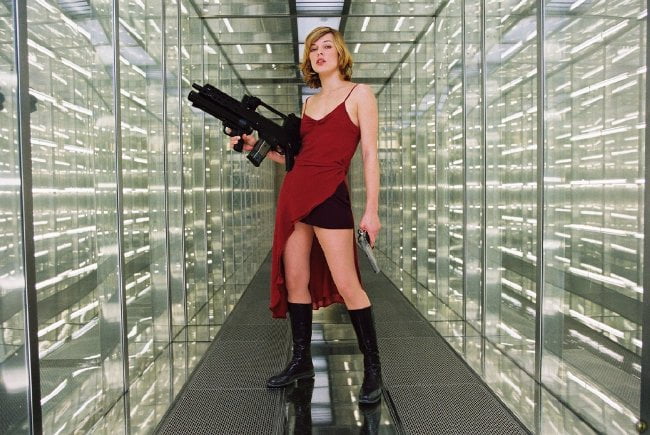 Alice (Milla Jovovich, "Zoolander") has barely come to after passing out in the shower of her large, remote mansion, when she, along with a husband she doesn't remember, is rounded up by a group of commandos and taken by underground train to a 'hive' where a computer named the Red Queen has run amok, killing all Umbrella Corporation research facility employees in the latest vidgame to film adaptation, "Resident Evil."

Seems Alice was also a victim of the Red Queen, who gassed the mansion which served as the secret entryway to Umbrella's hidden facility. While three members of the troop, including cool leader One (Colin Salmon, "The World Is Not Enough"), are killed by a slicing, dicing laser en route to the computer, a nervous Kaplan (Martin Crewes) pulls its motherboard after a beseeching entreaty from its holographic incarnation of a little girl. With entryways reopened, the survivors make a horrible discovery - the dead are now viscous flesh-eaters whose bite is infectious.

Seems the Red Queen was protecting the outside world from infection by the T-Virus, which was let loose into the atmosphere of the hive by a mercenary traitor with a plan to make millions from the antidote. Writer/director/producer Paul W.S. Anderson takes pages from the likes of "Alien," "Deep Blue Sea," "The Night of the Living Dead" and "2001" and presents a thoroughly unoriginal, but fast-paced and entertaining genre B-flick.

With a too-pounding industrial score by Marco Beltrami ("Scream") and Marilyn Manson acting as a horrific metronome, the action never lets up. Alice discovers a pack of zombie-Dobermans and dispatches them with some well-placed flying kicks. Zombies are strafed, punched and pummelled while a rebooted Red Queen enforces a race against time. A mutant early experiment-gone-awry known as the Licker is unleashed to goose up the getaway. The film's opening sequence, which shows the hive's shutdown, is a tensely edited palm-sweater.

Jovovich shows a lot of presence as the tough zombie warrior with a humanistic streak that may be a cover for prior crimes. "Girlfight's" Michelle Rodriguez is typecasting herself into a corner with her pugilistic pout. The rest of the cast is comprised of somewhat familiar faces who do little to distinguish themselves, although Salmon's calm recalls the lone, brave black hero of Romero's touchstone zombie film.

"Resident Evil" is a no-brainer that's fast, flashy and fun. The apocalyptic epilogue portends that this game isn't over.

In a secret underground laboratory a biohazard disaster takes place and hundreds, maybe thousands, of workers are killed. A team of heavily armed troopers breaks into the facility expecting to find death and destruction but none are prepared for the horror they must face in "Resident Evil."

Developed in the strictest secrecy by the Umbrella Corporation (talk about an appropriate name for an all-enveloping, evil corporate monolith), a deadly virus, called the T-virus, is released into the air conditioning system of the company's underground facility. Water sprinklers trigger and flood sealed rooms, drowning the occupants. Halon systems go active, sucking the oxygen from the rest of the complex, killing men, women and lab animals in moments as everything, including the elevators, goes haywire.

Cut to naked Alice (Milla Jovovich) waking up on her bathroom floor with the shower curtain pulled down over her. She, obviously, doesn't have a clue what happened, just as we do not. As she wanders around, befuddled, a squad of armed-to-the-teeth security personnel smash through the doors and windows and take her and a "cop" named Matt (Eric Mabius) prisoner. The troop's mission is to enter the complex, called "The Hive," and shut down the system run by a super high-tech artificial intelligence system dubbed "The Red Queen."

This is when things really begin to get rolling in "Resident Evil" as the black-clad security guards and the scantily-clad Alice learn the hard way that not only did the T-virus kill of the inhabitants in the complex, the victims joined the ranks of the living dead! And, there are a bunch of really large zombie attack dogs to contend with! And, there is some creepy thing, created by the Red Queen in an experiment gone awry, that is not only ugly, it is mutating into something bigger, stronger and meaner! Then, there is the Red Queen, itself, which is out to stop the armed invaders and uses every deadly system in the complex to keep them completing their mission. In true "10 Little Indians" manner, the troopers are taken out one by one by the queen, the zombies and mutant thingy to the crashing sounds of the industrial-techno pop score (by Marilyn Manson and Marco Beltrami). Who is going to win, in the end? We know going in, but it's all fun, nonetheless.

The screenplay for "Resident Evil," by helmer Paul Anderson, is based on the popular video game series by the same name (AKA "Biohazard"). But, watching the movie, I did not get the feel that I was watching a CGI game-turned-action flick. Sure, it is derivative of many other flicks from the obvious "Night of the Living Dead" and "Aliens" to things more obscure, like "Ghosts of Mars" and Agatha Christie's "Ten Little Indians," but, even so, this modern horror/monster movie stands on its own as a sci-fi actioner.

Milla Jovovich, as the kick-ass-soldier-turned-amnesiac-turned-kick-ass-leader, is super in the role of action figure. There is not a great deal of dialogue, as expected in a video game to movie conversion, so we're not going to get any meaningful talk except things like "look out for the zombies!" or "Holy ****!" But that's OK. We're here to see Milla and company shoot the hell out of anything that moves and they do an excellent job of it. Michelle Rodriguez, who made such a splash in her debut film "Girlfight," does little except to look vaguely pissed off through most of the film but handles the physical action well enough. The rest of the cast is good-looking, physically capable and almost totally generic cannon fodder as they get picked off one by one.

Techs are high grade and good looking. The Hive has the look and feel of a lair for the Red Queen (effectively given the voice of a young English girl) and is full of obstacles and booby traps that plague and decimate the troopers. One sinister corridor they invade becomes a laser beam death trap as it chops up its victims like sushi. Camera work by David Johnson is at the same hyper level as the film score and helps move this kitchen-sink of a horror flick right along. Even the cliché-ridden screenplay keeps the action moving - if bloodthirsty zombies don't getcha, living dead Dobermans will. If they aren't enough, then the evil mutant gets thrown into the equation, just to make sure that the hero has enough to keep her busy.

"Resident Evil" is not new and different, but it throws enough stuff at you so you don't think about having seen it all before. The quality of the action yarn belies its vid game roots and stands up with the best of the modern B monster movies.