Requiem For A Dream 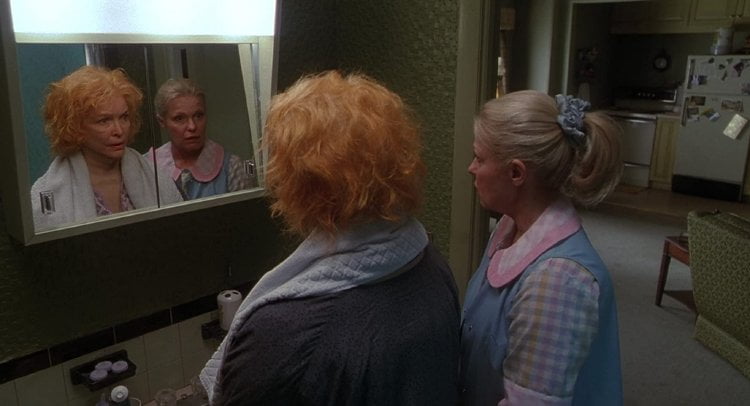 Sara Goldfarb's (Ellen Burstyn) dream comes true when she's invited onto her favorite game show. Her son Harry's (Jared Leto, "American Psycho") dreams are shared with his girlfriend Marion (Jennifer Connelly, "Dark City") and best friend Tyrone (Marlon Wayans) when the perfect heroine score presents itself. But drug addiction will destroy the dreams of not only the obvious younger generation, but the Jewish Brooklyn housewife as well in director Darren Aronofsky's ("Pi") "Requiem for a Dream."

Writer/director Darren Aronofsky allows just the briefest glimpse of hope before taking his audience on an unrelentingly dark descent into the ravages of drug addiction (as adapted from the Hubert Selby Jr. novel). Although he's graced by a tour de force performance from Ellen Burstyn and career high turns from Leto, Connelly and Wayans, the film is a stylistic achievement bearing a shopworn message.

We're introduced to Sara as she cowers in a locked room while her son 'borrows' her beloved television to fuel his drug habit. Once he's flush from a once-in-a-lifetime score, he buys her a fabulous new television, but is alarmed to learn his mom's become an amphetamine junkie courtesy of a local 'diet' doctor. Her game show dreams will not be complete unless she can fit into a special red dress worn on a family occasion twenty years ago.

Of course, Harry also neglects his own advice and dips into his own stash, losing his fortune and forcing Marion back into the arms of Arnold (Sean Gullette, "Pi") to secure cash. This is just the beginning of all three's far worse fates.

Burstyn is fabulous as the meek, naive housewife who loves her only son. Her harrowing decent into madness is jolting, like you were watching a kindly elderly relative enter hell. Leto retains sympathy by letting the true love he feels for his mother shine through. A genuine family bond can be felt between the two. Jennifer Connelly simply has never been better as Marion, an artist estranged from her bourgoise family who loses every shred of human dignity by affixing her star to Harry. She's never more affecting than when she begs Harry to return home over the phone before going dead-eyed at the realization of what she'll need to do to get her next fix. Wayans is also good, if underutilized, as Ty, who also reflects on the love of a single mother.

Technically, the film is well done with a unique style. Particularly admirable is the editting by Jay Rabinowitz, who keeps the dual stories moving forward coherently, often spending only seconds with Sara before cutting to Harry. Sara's Coney Island neighborhood lends real character to the film. Kronos Quartet provide strings (which actually get a bit overwrought, but I think that was the point).

As well done as this was, I found myself walking out thinking, hmm...drugs are bad. The film has none of the humor that leavened recent drug films such as "Trainspotting" and "Sid and Nancy." It will put you threw an emotional wringer even as you're wondering what the point is.

Darren Aronofsky made an indelible splash with his debut film, the unique science-fictionesque mathematical thriller called "Pi." That black and white film, written by the director, is a stylish, intellectual flick that left a deep impression on the viewer. Now, Aronofsky gives us his sophomore effort based on the novel by Hubert Selby Jr. in a story of drug addiction that crosses generations in "Requiem for a Dream."

Ellen Burstyn is Sara Goldfarb, a lonely, aging Jewish matron who lives for the chance to appear on her favorite TV game show hosted by Tappy Tibbons (Chris McDonald). Recently released from a mental care facility, Sara also lives under the delusion that her junkie son Harry (Jared Leto) is a successful young man with a beautiful fiancee who he plans to marry and produce a grandchild for Sara.

Harry is on a fast track to disaster with his girlfriend Marion (Jennifer Connelly) and best friend Tyrone (Marlon Wayans). Harry, the man with the plan, has the idea that they should pool their cash, make a big score of smack, cut it up and sell it for a profit, continuing the process until they have enough money to buy a corner grocery store and live happily ever after. One problem. They make the deal and agree to "let's do a little taste. It's business." One taste leads to another and the downward spiral continues.

Meanwhile, poor, deluded Sara learns that she has been selected as a possible candidate to appear on her beloved game show. Convinced that she is going to be on national TV and loved by millions, she further fools herself that Harry is doing fine and will soon marry. Gazing at a photo of her and Harry when he graduated high school, she vows to go on a crash diet until she can again wear the slinky dress from the picture. Normal dieting doesn't work, but a friend tells her that a local doctor can take care of the problem easily. Sara takes the advice and begins a legal amphetamine addiction that rivals her son's illegal heroin needs.

While "Requiem for a Dream" is a finely crafted film that benefits from good acting, especially Burstyn, a well-written script by Aronofsky and the novelist, and confident direction by the second-time helmer, it is, in a word, a bummer. I don't mean that it is a bad film, but the subject matter and the depiction of uncontrolled addition, especially of the aging Sara, are gut wrenching in display and detail of the despair. As things spin out of control for the four addicts there is a palpable feel of hopelessness permeating the movie.

Things start off pretty shaky from the beginning and deteriorate fast for all the principles, reminding me of the early Al Pacino film, "Panic in Needle Park." In the 30-year interim between the 1971 film and "Requiem for a Dream" there has not been any changes in the world of drug addiction. Now, as then, drugs, whether legal or not, can destroy lives and filmmakers like Aronofsky seem to revel in the depravity of this subject.

The helmer gives weight to each of his characters' stories. Sara is sadly sympathetic as we watch this lonely lady cling to the false hope of fame, while falling prey to legally sanctioned addition in the form of prescribed diet pills. Burstyn gives a solid, harrowing character study that is also an indictment against the incompetent medical industry that permits the legal creation of such hapless victims. The actress deserves acclaim come year's end.

The youthful trio led by Leto are pathetic in both their needs and their desires. Their united front to become heavy-hitting drug dealers soon falls apart as the need to shoot up overrides all else. Harry ends up losing his arm to dirty needles, Marion debases herself sexually for a fix and Tyrone ends up doing hard time for dealing. All in all, these folks are not poster children used to extol the use of heroin. The ending, with all of the victims curled into the fetal position, pretty much punctuates the powerful anti-drug theme of "Requiem for a Dream."

Aronofsky makes no bones about dealing with unconventional film fare in his first features, displaying a dark, educated intelligence in filmmaking and storytelling. Neither of his films is compelling from a mainstream sense and "Requiem" delves into the darker side of human existence and waves it before us like a flag, daring us to watch. His depiction of the addictions and the treatments that our society provides to its addicts is hard stuff to watch and should not be approached blithely.

"Requiem for a Dream" is not for the average movie-going bear and is geared for the hard core film nut who relish addiction flicks such as the aforementioned "Panic in Needle Park," "Lost Weekend" and, even, "Trainspotting" (though the latter is almost lighthearted in its treatment of substance abuse). The demographic target for "Requiem" is focused on a extremely tight viewing audience with a specific agenda. I doubt if it will get beyond the art house/film buff exposure. It's a harsh film but with excellent technical attributes and fine performances by Burstyn and all. Think about it but be prepared to be shocked.