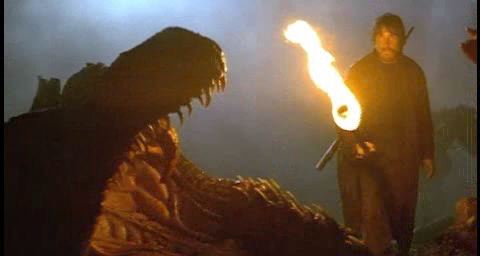 In present day London, a young boy visits his mother at a construction site and awakens a beast only accredited to myth and legend. Twenty years later, that boy, Quinn (Christian Bale, "American Psycho"), is helping a community survive the scorched earth within the ruins of a castle when an American dragonslayer arrives to unseat what has become a "Reign of Fire."

Story-by guys Gregg Chabot and Kevin Peterka, who wrote the screenplay with Matt Greenberg, cooked up this premise during a backpacking trip throughout Britain. For the most part, this is popcorn movie fun with equal doses of action, cheese, ham and cheek (as well as a serious debt to "The Road Warrior"), but it feels like unrealized potential, as if the filmmakers only went halfway and filled in the gaps with cliche.

Quinn the kid (Ben Thornton) has a tweaking sense of humor. Quinn the adult, while mostly serious, will perform the Darth Vadar/Luke Skywalker 'I am your father' scene with his best mate Creedy (Gerard Butler, "Harrison's Flowers") for the kids and claim authorship. While he banters with Creedy ('If anything happens, you know what do to.' 'No I don't!'), mostly Quinn is in the solemn business of protecting his community from the overhead peril and their own rash judgement. When danger looms (a tower lookout with a predatory bird signals), Quinn herds the children (each and every one a wide eyed English poppet) into the castle chapel and demands they recite their 'prayer,' which is really a dragon 'duck and cover' recitation. Besides Creedy, Quinn is assisted by young Jared (Scott James Moutter), a surrogate son and symbol of his lost childhood.

When a stream of tanks arrive bearing American military dragonslayers seeking overnight shelter, Quinn is suspicious and the writers have fun with stereotypes as a soldier tosses one kid an apple (all chocolate presumably having been melted by dragon breath). Van Zan (Matthew McConaughey, a convergence of Mad Max and Toecutter) forces an uneasy alliance with Quinn until he proves himself with a spectacular (and confusing) display of hi-tech dragon hunting.

Van Zan is idolized by his men, which includes helicopter Alex (Izabella Scorpuco, "Goldeneye," only occasionally successful hiding her accent), a potential love interest for Quinn. She rides over the horizon to lure a dragon, then parachuting 'angels' (life expectancy is 16 seconds once they leave the copter) act as bait, firing nets and bringing the animal towards Van Zan for the kill. McConaughey is linked to the beast by his grunts and 'hrrrs' which the sound mix. Just before we learn that they must obliterate the lone male dragon (which killed Quinn's mum (Alice Krige) twenty years earlier) in order to save mankind, Van Zan is seen astride his tank, its cannon phallically pointing towards London. (And while it's refreshingly different to go after daddy for a change, won't the thousands of pregnant females still pose a threat for years to come?) McConaughey is burdened with the worst of the dialogue, particularly a wet blanket speech given to Quinn's community when they're partying away to Hendrix's "Fire" after his dragon kill.

Director Rob Bowman ("The X-Files") more than likely has a summer hit on his hands, but with more effort and polish, "Reign of Fire" might have been something more lasting.