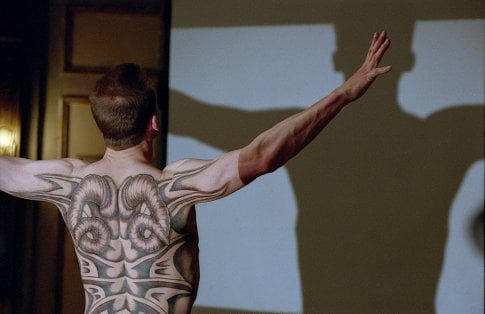 In 1986, Michael Mann adapted the Thomas Harris novel Red Dragon and introduced the character Hannibal Lecter (chillingly portrayed in a small role by Brian Cox) to the world. When "The Silence of the Lambs" hit the streets in 1991 Hannibal the Cannibal (Anthony Hopkins) was propelled to icon status as one of filmdom's most recognized villains. Hopkins reprised his famous role in last year's "Hannibal," a fair film made better by the actor's performance. Since Hollywood's attitude is "there is no such thing as too much of a good thing" we get the inevitable and much anticipated remake of Harris's original novel in the serial killer thriller trilogy, "Red Dragon."

The film begins in a large concert hall where the well-to-do symphony attendees include the secretive, undiscovered serial killer Dr. Hannibal Lecter (Hopkins). One of the players in the orchestra is the object of the murderer's attention and we come to find out, later, at a dinner party held by Hannibal for the symphony board of directors, that the musician has mysteriously disappeared. When one of the diners inquires what kind of meat they are eating the good doctor won't tell, but his gaze into the camera tells us (wink-wink) that she really doesn't want to know.

Jump to the aftermath of the party as Hannibal is cleaning up the dinner dishes. Enter FBI agent Will Graham (Edward Norton) who has enlisted the clinical psychiatrist in his investigation of a particularly heinous serial killer. We know what Will does not and it comes as no surprise when the agent discovers that he is in the den of the murderer he seeks. A death struggle ensues and both men lay, near mortally wound. All this happens before the credits roll.

Shift ahead seven years to Marathon, Florida where Will fixes marine engines and tries to forget his past trauma. He gets a call from his former boss, Jack Crawford (Harvey Keitel), who pleads with his past underling to help him out on a particularly grisly case. A killer is on the loose, nicknamed the Tooth Fairy because of his propensity for biting his victims, and he is wiping out entire families. Will initially refuses but his ability to get inside the head of a killer is too keen and he is convinced to leave his self-imposed isolation. His investigation of the crime scenes uncovers new clues and makes Graham realize that he has no choice but to seek the help of the man who nearly killed him - Hannibal.

This setup leads to a thriller tale that is structured very similarly to the near-perfect "Lambs" with the young agent trading perks and threats for information and clues from his former mentor. Even though the source material precedes the second Harris novel adaptation, the new film feels like a rehash of Jonathan Demme's classic work. There is a sameness to the story, sans the deft direction by Demme and the superlative acting by Jody Foster, Anthony Hopkins and Ted Levine, that makes me feel as if I had seen it all before - "Manhunter" notwithstanding.

Anthony Hopkins, as Hannibal, is the main draw for audiences to "Red Dragon." Even though the story is a prequel the '91 flick, little has been done to make Lecter seem younger. This is initially a problem but the actor expertly pulls the eye away from this discrepancy and you fall right in to the cadence he builds as the near demonic yet still likable serial killer. It won't garner any awards come years end but Hopkins owns the character and his on-screen time is the best thing in the remake (with one exception, which I'll get to later).

Edward Norton is, unfortunately, given little to do besides being the mighty murderer hunter who is willing to take chances even if his family is at threat - though he would never really put them in harm's way. (Well, he does, but....) Norton has big shoes to fill as he replicates Jody Foster's dedicated cop but he is merely a pawn in the "Red Dragon" game. Ralph Fiennes as the serial killer, the Tooth Fairy, is hampered by the comparisons that are inevitable to Ted Levine's masterly portrayal of the much more menacing Buffalo Bill in "Lambs."

The rest of the supporting cast is mostly OK with Emily Watson giving a solid perf as the blind coworker that Fiennes's character, Francis Dolarhyde, takes a liking to. Watson is convincing in her moves as a sightless person and her character, Reba, is responsible for infusing humanity into Dolarhyde's persona. Hers is the best non-Hannibal thing in the movie. Harvey Keitel is serviceable as FBI boss Crawford but Scott Glenn, in "Lambs," fit the character better. Anthony Heald, as sleazy Dr. Chilton, and Frankie Faison, as Hannibal's warder Barney (the only actor to appear, besides Hopkins, in the three recent Harris adaptations), return in a minor capacity with Heald getting some laughs because of his slimy nature. Mary-Louise Parker and Philip Seymour Hoffman, as Will's wife Molly and tabloid reporter Freddy Lounds, respectively, are essentially wasted talents in their roles.

The screenplay, by "Lambs" scripter Ted Tally, suffers from the fact that the source material is not as mature as Harris's The Silence of the Lambs. The first Hannibal novel has a lot of flash but not the substance that made "Silence" such an instant classic. Tally does yeoman's work bringing the novel, Red Dragon, to the screen but it does not grab the heart and mind.

Helmer Brett Ratner, known for the "Rush Hour" flicks, seemed an unlikely choice to direct this long awaited tome. The director does well enough moving his actors around and telling the story of a deranged killer whose warped psyche is the product of an abusive, unsympathetic grandmother. (Grandma is not shown in a good light here.) Techs are well done and flashy but the production design and art direction, by Krista Zea and Steve Saklad (Zea worked on "Lambs"), do not attain the same incredible level as in the Demme film. Lenser Dante Spinotti keeps the camerawork interesting.

Comparisons to "Silence" are inevitable - see above review - and, I think, justified, as the latter is the benchmark that the Hannibal series will and should be measured up to. Ratner and company do a decent job, though, and I can recommend "Red Dragon" to the Hannibal and thriller fans.