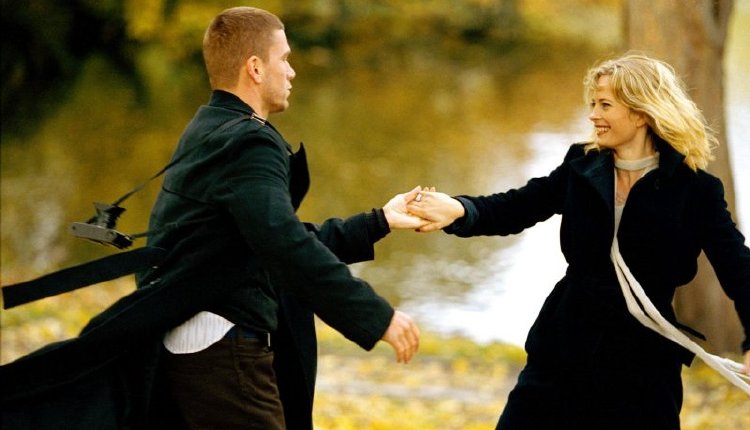 What is the nature of love? Is the sexual pairing of a man and a woman a romantic union that is an entirely different experience for the two halves of the whole? Danish writer/director Christoffer Boe breaks down the elements and observes them in a poetic yet cerebral "Reconstruction."

This 2003 winner of the Cannes Palmes d'Or is an auspicious debut for its wunderkind creator. Boe does the near impossible - immerses you in his characters' stories while commenting upon his own part in their fabrication.

A narrator, later revealed as one of the primary characters, explains that at the end is always a little smoke and magic, but at the beginning there is a man - not yet alone. Alex (Nikolaj Lie Kaas, "Open Hearts") appears on a Copenhagen street before a dissolve places him among a crowd. He spies a stunning woman, Aimee (Maria Bonnevie, "The 13th Warrior"), in a bar, walks in and proposes that she accompany him to Rome. Boe interrupts again, to introduce his new characters of Aimee and her husband August (Krister Henriksson, "Faithless") with a series of quick head shots interspersed with their artfully cataloged, identity-establishing wardrobes. They're staying at the Hilton, and Aimee has met Alex when August was called away for the evening on business. We're then brought back to an earlier beginning, which recreates Alex eating out with his father and his long-term girlfriend Simone (Bonnevie, in an amazing dual performance). Alex treats his father badly, spurning the old man's affection by leaving under false pretext, agreeing to meet Simone at the train station. He first spies Aimee on the way to meet Simone and ditches Simone to follow Aimee to the Bobi Bar, where their initial scene is replayed, but with less hesitation, more directness.

After a night of blissful lovemaking, Alex leaves his lighter in Aimee's hotel bathroom with a luncheon invitation and leaves, crossing August, who asks for a light Alex cannot provide. August's realization of what has transpired sets him on a course to win back his wife. Alex returns to his apartment to discover his door has disappeared and his back story erased - no one remembers him, including Aimee who nonetheless shows up at the prearranged restaurant with his lighter to rekindle their romance. Alex's love is tested in a biblical climax orchestrated by a character revealed as a godlike puppetmaster, a stand-in for the director himself.

Boe's script (cowritten with Mogens Rukov, "The Inheritance") is full of references to dreams and duality. The smoke and mirrors which bookend the film (a street performer makes a lit cigarette hover midair between his hands) are a metaphor for the identities we project onto those we love - Boe strips away Alex's identity, yet he is still 'loved' by Aimee. August claims that 'women need love, but men like to be surprised by it.' Later his editor asks 'Is your wife your decision or an imposed end?' Alex's dad suggests that love doesn't exist unless it is reciprocated.

Nikolaj Lie Kaas, who gave such a strong performance in "Open Hearts," is sure to cross over to global recognition after a couple more films like this. The actor, with his hard eyes and strong jaw, proves his strength as a leading man, remaining sympathetic even while behaving badly because of his reckless romanticism. Maria Bonnevie, stunning as Aimee with her aristrocratic blonde locks, black-red gash of lipstick and liquid swipes of eyeliner, and pretty but plainer as Simone with her brown plaits framing an unmade-up face, conjures up two completely different characters with more than just hairstyles. Aimee is an ethereal beauty with an air of mystery and touch of entitlement while Simone is down to earth, rooted in simpler things. Krister Henriksson's August is an attractive older man, needier than his wife and becoming mature enough to admit it.

Cinematographer Manuel Alberto Claro makes Copenhagen a magical place of illusory daytime cool and warm, velvety evenings lush with possibility. A harshly lit train station is a switching ground that exists outside of reality. The otherworldly quality is emphasized by Boe's chaptering device of targetting character locations with pulsing pinpoints of light on a map-like overhead shot - Copenhagen as observed by its creator. Cole Porter's "Night & Day" begins and ends this film that tilts everything upside down and Boe makes Samuel Barber's oft-used "Adagio for Strings" seem fresh within the context of his dreamscape.

'It's all a construction, like this film, but it still hurts.' our narrator reflects at film's conclusion. "Reconstruction" is at once a thought-provoking puzzle and a revel in the sad beauty of the emotion called love.