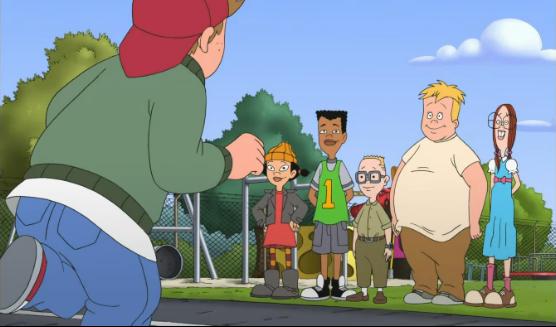 T.J. Detweiler (voiced by Andy Lawrence) has big summer vacation plans for himself and his pals. But, when they all announce that they are going to a variety of camps for the summer, poor T.J. is left to his own devices. When he observes mysterious goings on at the 3rd Street School, he learns that it is up to him to save summer vacation for kids everywhere in Disney's "Recess: School's Out."

T.J. Detweiler and his pals know there's something even better than recess and that's summer vacation. T.J. is shocked to learn that Vince, Mikey, Gretchen, Gus and Spinelli are all going to speciality summer camps, though, leaving him the degradation of play dates with school snitch Randall. When T.J. falls upon mysterious goings-on at Third Street School that result in the kidnapping of Principal Prickly (voice of Dabney Coleman), however, he gathers his team to combat evil forces in "Recess: School's Out."

Expanded for the big screen from the Disney Channel's popular "Recess" series, "Recess: School's Out" is a terrific tale for kids that includes plenty for adults to enjoy as well. This is a rarity in the first two months of 2001 mainstream film releases - a movie with a smart script!

On the last day of school at Third Street, things are as usual - T.J. and his band are tormenting Prickly and no amount of Randall's snitching to Miss Finster can keep the troop from attaining their goals. When his pals are gone and T.J. sees weird thugs patrolling their school as odd green laser beams emit from the gym, neither his parents nor the town police will believe him. T.J. gets a reluctant Prickly to accompany him only to see the Principal disintegrated. Soon Prickly's become an unlikely ally to T.J. when they discover that ex-Principal Benedict (voice of James Woods), a former Secretary of Education who attempted to do away with school recess, is carrying out a master plan to squelch summer vacation by moving the moon's orbit!

The story is smart enough to include a subplot where T.J. blackmails his older sister Becky (voice of Melissa Joan Hart) with her diary to get a ride to gather his friends. A former love triangle among Benedict, Finster and Prickly is played for laughs ('That part still grosses me out sir' gravely intones T.J.) and pop culture references, particularly from the 60's and 70's, abound ('Teacher - leaves those kids lone!' cries Finster in full attack mode). Kindergartners are presented as a pack of scrabbling savages without being condescended to.

Animation is fairly flat, although an improvement on the cable series. Computer animation is used for elaborate zoom shots and a couple of visual jokes are well drawn. Music is superbly chosen, from Martha & the Vandellas "Dancing in the Streets" to the 5th Dimension's "Let the Sunshine In." Robert Goulet provides the singing voice of operatic Mikey as well as a new version of "Green Tambourine."

"Recess: School's Out" is smart while encouraging kids to be kids.

There have been several television cartoon series that successfully transferred to the big, feature-length screen. "The Rugrats" movies are huge (though they are definitely geared to smart kids) and "Beavis and Butthead" translated into an at once intelligent and dumb road journey done with quality. After attending a screening of "Recess: School's Out," I had the chance to sit down, the next morning, and watch a marathon of "Disney's Recess" TV series. The movie is an (infrequent) example of how bigger can definitely be better. The TV program is good, with intelligent kids, witty dialogue and a different moral message every show. The movie adds to this mix a complex good guy/bad guy tale where kids and the smart adults save the day.

As one would expect, a big movie deserves a big story and "Recess: School's Out" is no exception. Outcast former principal Dr. Benedict (voice of James Wood) has never gotten over being fired for his "no recess" policy. In the ensuing years, he has been working on an invention that he guarantees will raise student test scores - a device that will make it winter forever and eliminate summer vacation! When Benedict moves his operation into the 3rd Street School, it comes under the observant eye of T.J.

The resourceful T.J. musters his buddies from their various camps, with the help of his older sister Becky (voice of Melissa Joan Hart). The gang - T.J., Vince (Rickey D'Shon Collins), Mikey (Jason Davis), Gretchen (Ashley Johnson), Gus (Courtland Mead) and Spinelli (Pam Segall) - infiltrate the high security of the school, uncover the heinous plot of Dr. Benedict, and muster the forces of the kids and teachers (led by curmudgeonly Principal Prickly (Dabney Coleman)) to thwart his evil plan to end summer vacation.

The extra time afforded in a feature length adaptation of a kids' TV show is put to excellent use of the show's creators and writers Paul Germain and Joe Ansolabehere. The story is typical, though not routine, with suave, arrogant Dr. Benedict power hungry to rule the students' worlds. It's up to the kids to stop him and they use every means at their disposal to do so. Mixed in with this tale are a variety of positive moral messages - if you work together, you can overcome any obstacle if you work hard; the importance of friendship, understanding and trust; and more - are played out clearly and cleverly. There is also a huge heaping of wit and satire that dips back into the 60's for material that will appeal to adults, too. Heck, I guffawed out loud several times at jokes that were not meant for any kid I know.

The youngsters populating the 3rd Street School are an eclectic collection of kids of all types and sizes. T.J. is a con-artist and prankster, par excellent, who uses his brains not for personal gain, but with an eye toward justice for all of the kids at the 3rd Street School. His buddies are a bunch of good kids with normal strengths and weaknesses, but who always learn from the lessons of their young lives. Other peers, like the Diggers, the Hustler Kid and BMOC King Bob, flesh out the background characters. The kindergarten toddlers are a tribe straight out of "The Lord of the Flies" and prove to be the betters of the bad guy ninjas sent against the children by maniacal Dr. Benedict. Being surrounded by a bunch of five-year olds in war paint strikes terror in my old heart, too.

The intelligent and entertaining story is supported by production values that are better than any adult movie that I have seen, so far, released this year. Although the animation is flat, just like the TV show, the maker's use a fluid "camera" movement and perspective that puts the film above its television roots. The intelligent writing is beautifully complemented with its cool and catchy collection of vintage pop tunes that are used exactly right. Martha and the Vandellas' "Dancing in the Street" plays over the kids' release from school for the summer. Three Dog Night's "One" accentuates T.J.'s loneliness when all his friends leave for camp. There are more great songs and they are all used well - even Puccini's "Nessum Dorma" and Gilbert and Sullivan's "I'm Called Little Buttercup," if you can believe it.

Right now, "Recess: School's Out" is the best film of 2001 that I have seen. I feel bad for us adults that are forced to deal with drivel like "Valentine." Oh, to be a kid again.