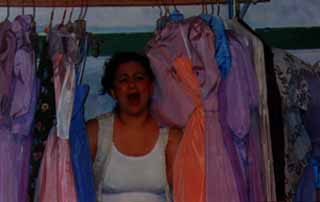 Ana's teacher Mr. Guzman (George Lopez, "Bread and Roses") believes she has what it takes to excel in college, but her drama queen mama (Lupe Ontiveros, "Storytelling") is determined that her daughter make her living sewing in her sister Estela's (Ingrid Oliu, "Stand and Deliver") sweat shop. While her mother finds every way to criticize her, Ana's school friend Jimmy (Brian Sites) sees a beautiful brain. Jimmy knows that "Real Women Have Curves."

We're introduced to Ana (newcomer America Ferrera, resembling a zaftig Michelle Rodriguez) washing windows before her last day of high school while her mother Carmen moans a string of imagined ailments from her bed. Ana calls her bluff and receives a list of her shortcomings in return. Aspiring to a better life, Ana quits her job at a taco stand, horrifying Carmen, who insists she'll work for Estela. A visit from Mr. Guzman gets Ana's dad's attention, but Carmen prevails.

Ana sweeps and irons, listening to the gossip of Carmen, Pancha (a very likeable Soledad St. Hilaire, "Full Frontal") and Dona Carlota (Sandie Torres). Her respect for her hard working sister grows, although she's horrified to learn that Estela meekly accepts $18 per dress that goes on to fetch $600 at Bloomingdale's. Meanwhile, Ana shyly begins a romance with Jimmy, a classmate who's leaving for Columbia in the fall.

America Ferrera ably holds the screen in her debut performance. She's smart and sexy with enough edge to be rebellious while still being demure. Ingrid Oliu is also intriguing, presenting a face of intelligent competence to her workers and a posture of servitude to the professional woman who contracts her services. Brian Sites gives a sensitive but confident spin to Jimmy, the boy who helps Ana bloom and George Lopez does a nice rendition of the supportive teacher. Ontiveros, though, is stranded by a script that fails to give her appropriate motivation for dragging down her daughter's spirit. She's a harping martyr.

"Real Women Have Curves" is the type of film that presents a Latino family as having landscaping cousins who always hang around strumming guitars. Ana's course is never in question, but when she makes her break, there's no accompanying relational breakthroughs. Mama retreats in a sulk and Ana's brains are never used to turn Estela's business around. Still, Cordoso gets to the heart of women working together and makes the experience enjoyable. When the plump chicks shed their clothing in the heat of the workplace, their sisterhood will leave you smiling.

Ana (America Ferrera) is an intelligent, highly motivated working-class Latina teenager at a pivotal point in her young life. She is graduating high school, after attending the prestigious Hollywood High, and has the potential to earn a full scholarship to Columbia University. But, her family, led by her guilt-trip laying, martyr of a mother Carmen (Lupe Ontiveros) expects her to contribute to the family's coffers instead by taking a job in the family business. Ana's future hangs in the balance as she learns that "Real Women Have Curves."

RWHC, by director Patricia Cardoso, is aimed at a teenaged girl demographic and offers a good role model with the smart and ambitious character of Ana. Newcomer Ferrera has the same sullen and brooding look as Michelle Rodriguez (though a few pounds heavier) and keeps her character's anger - over family pressures, decisions about her future, fear about same - bottled up to maintain the peace. Ana does speak her mind, eventually, and talks certain truths that her family may not be quite prepared for from the independent-minded girl.

This is a by the numbers little indie flick that would play well as an after school, young teen special on HBO. (It is, as a matter of fact, an HBO production.) There aren't any surprises about what's going to happen to Ana. The upbeat hit-you-over-the-head- screenplay by Josefina Lopez and George LaVoo (from Lopez's original play) is obvious and often cliché in its intent but is eminently likable despite it. This is more due to the way the characters are drawn in this heavily femme toned flick where the men are two dimensional icons of male integrity (is that an oxymoron?) that depict the life affirming qualities of love, honesty, integrity and kindness that every women would want in a man. There are no creeps in RWHC - except for the uncaring, well-to-do buyer, Mrs. Glass (Marlene Forte), who won't give Ana's struggling, small businesswoman sister a financial break.

Lupe Ontiveros anchors RWHC, using her experience and ability as an actor to be the foil to Ana's developing personality. She's not a likable character in her martyrdom but helps the to establish the reason for Ana's resolve to follow her heart and mind. Young Ferrera has the sullen quality I mentioned earlier to make a mark in a first film but, like Rodriguez, the 'tude has to be, in the future, tempered with a little humor and a smile once in a while. (Only Mister T can make a career out of looking pissed off all of the time.) The rest of the cast goes through their paces well enough but the lack of pro talent keeps the supporting characters in the background. Ingrid Oliu, as Ana's struggling small businesswoman sister, Estela, works earnestly to make something of her role as a hardworking woman whose business makes custom dresses for $18 a pop but sell at Bloomingdale's for $600 a copy. Guys are pretty one-dimensional with a lovable granddad, hard-working and supportive dad and a well-to-do classmate who sees Ana beyond the extra pounds she carries and loves her mind. Co-scribe LaVoo plays Ana's caring and supportive teacher, Mr. Guzman, and reps just how a teacher should behave toward his students.

I'm not led down any new trails but I enjoyed the walk with "Real Women Have Curves," anyway.