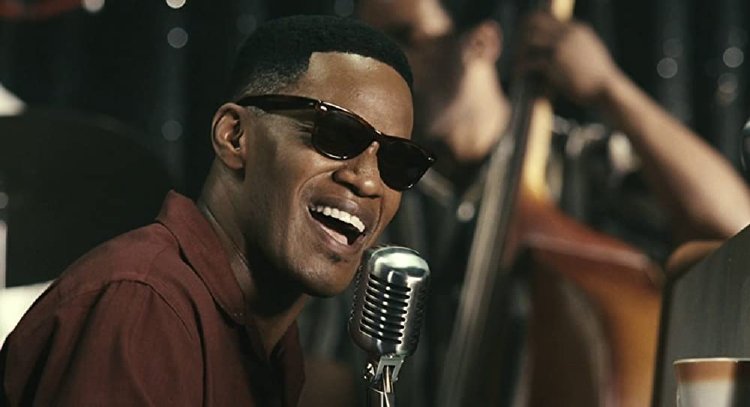 In 1930s rural Florida a seven-year old boy watches his younger brother drown in the washtub his mother makes her living from, then the light slowly begins to fade from his eyes. Strengthened by his mother Aretha's tough love and his promise to her to 'never be a cripple,' the boy grows into the beloved musical phenomenon known as "Ray."

Director Taylor Hackford ("Proof of Life") presents the life of Ray Charles with an arc that showcases the man's incredible ability to bust through and redefine musical genres with hugely popular appeal and success. But this is a warts and all biography so the inspirational trajectory is tinged with unsparing looks at Charles' ambition and self-indulgence as well as his private demons, visualized by Hackford as a succession of hallucinatory flashbacks. Until he makes an appearance in one of those imagined interior states as a seeing adult, Jamie Foxx disappears into the man he portrays so skillfully, we forget we are not watching the real thing.

We're introduced to Charles as a man not willing to accept his lot, humorously conning a white bus driver into his personal watchdog for a cross country trip by saying he lost his sight as a WWII vet. He steps off the bus in Seattle, meets Quincy Jones (Larenz Tate, "Biker Boyz") on a street corner and nabs a job at a club playing jazz piano for Gossie McKee (Terrence Dashon Howard, "Biker Boyz") at a female owned club. House emcee Oberon (Warwick Davis, "Harry Potter and the Prisoner of Azkaban") clues Charles in that Gossie's making twice his pay and is in cahoots with Marlene who is keeping Ray as her live-in boy toy. Ray, never one to be cheated, out-maneuvers the duo, landing a deal with Jack Lauderdale (Robert Wisdom, "Barbershop 2: Back in Business") of Swing Time records. It's not until Ray crosses paths with Atlantic Records chief Ahmet Ertegun (Curtis Armstrong, "Dodgeball"), though, that Ray takes off on the charts, his first single the Ertegun penned number "Mess Around."

Hackford and screenwriter James L. White seesaw between Charles' life on the road (he's introduced to a decades long heroin addiction while on the road with Swing Time's Lowell Fulsom band) with his home life, connecting the two with flashbacks which reveal Ray's tortured guilt over the death of his brother, his loss of sight and his mother's strength ('Never be a cripple'). Long- suffering wife Della Bea (Kerry Washington, "She Hate Me") eventually gets Ray to quit heroin cold turkey, but not before it's robbed him of the mother of his illegitimate child, former back up singer Margie Hendricks (Regina King, "A Cinderella Story," in a powerful performance). Apparently loyalty was not high on Charles' list of priorities, as we watch him ditch multiple women, old friend and bandleader Jeff Brown (Clifton Powell, "Woman Thou Art Loosed") and even the career shaping Atlantic Records. To Charles' musical credit, jumping labels and losing his mentor only spurred him on to greater heights - his own instincts shaped the symphonic "Georgia" and made C&W popular again.

Foxx is terrific and the music is great, but "Ray" is an overlong, meat and potatoes biopic with a not particularly likable hero, even if he did overcome tremendous odds and had the ability to adlib a hit song when forced to honor the last twenty minutes of a live gig. Newcomer Sharon Warren makes a striking debut as Ray's mother, Aretha Robinson and comic Armstrong along with Richard Schiff ("I Am Sam") as Ertegen's business partner Jerry Wexler and Rick Gomez as trail-blazing sound engineer Tom Dowd bring to life the excitement of a record company defining its groove.