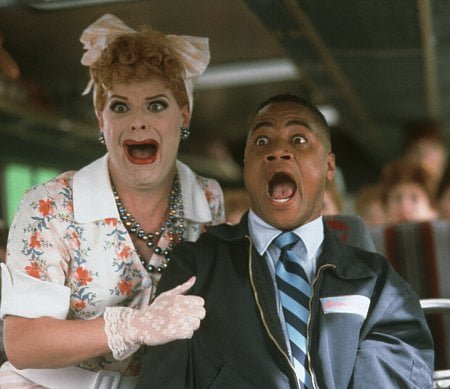 Six ordinary people, one eccentric gambling entrepreneur, $2 million stashed in a train station locker in Silver City, New Mexico. This is the formula for a cross-country chase (the only rule is there are no rules) that pits the contestants against each other as they all gallop for the gold in Jerry Zucker's "Rat Race."

Comedy maven Zucker ("Airplane," "Naked Gun"), using Andy Breckman's original script, assembles a group of comedians and actors and revisits the silent-era slapstick style mined so well by Kramer decades ago. With "Rat Race" we have Rowan Atkinson, John Cleese, Whoopi Goldberg and Cuba Gooding, Jr. leading the cast as a disparate group who, for one reason or another, arrive at the casino owned by wealthy Donald Sinclair (Cleese). All play the slot machines and each receives a special gold token that gains them entrance to the casino penthouse. Once there, Sinclair informs the crew that he has gathered them together to make them an offer they can't refuse.

Here's the deal: in a locker at the train station in Silver City sits a duffel bag containing millions. Each contestant is given a key to the locker and they must use whatever means they can find to get to the station and, first come, win the loot. Along the way, the various pairings beg, borrow and steal any means of transport to get to the final destination. A gambit by two of the players, brothers Duane and Blaine Cody (Seth Green and Vince Vieluf), shuts down the Las Vegas airport, forcing everyone to search for ground transport, evening the odds.

Gambling addict Randy Pear (Jon Lovitz) dupes his wife (Kathy Najimy) and kids that he's on his way to get a job, not yet another get-rich-quick scheme. The kids spot, along the highway, a sign for the Barbie Museum and insist that, against their dad's protests, they stop for the exhibit. Much to their chagrin, the museum turns out to be a skinhead hangout honoring the notorious Nazi war criminal Klaus Barbie. The Jewish family beat feet and steal Hitler's Mercedes, an exhibit at the museum, to make their getaway and head to Silver City.

The Cody brothers lose their key to an unscrupulous guy at a hardware store and have to get it back before they can continue on their way, resulting in a chase involving a hot air balloon and an extremely unhappy cow. Mother/daughter team of Vera and Merrill (Whoopi Goldberg and Lanai Chapman) run into a nutty squirrel lady (Kathy Bates) and their car gets wrecked, forcing them to steal a rocket car. Narcoleptic Enrico Pollini (Rowan Atkinson) shags a ride with inept Zack (Wayne Knight), an ambulance driver tasked with delivering a human heart to El Paso for a transplant. Owen Templeton (Cuba Gooding, Jr.), a pro football referee who screwed up a big game, hijacks a busload of "I Love Lucy" look-alikes in his quest for the money. Breckin Meyer and Amy Smart pair up as the most normal in this abnormal lot, but they, too, are drawn in to the crazy race. Unbeknownst to this unlikely crew of treasure hunters, Donald Sinclair is using the race to amuse his high stakes gamblers as they watch and bet on the contestants.

"Rat Race," while not as complex as "Mad, Mad World," is goofy fun that may not always work well, but has enough laughs and silly stunts to keep amused a summer audience trying to beat the heat. All of the actors, most of who are on screen alone or in pairs most of the time, give a yeoman's effort in providing the appropriate dose of low-brow comedy to their characters. Rowan Atkinson, as Senor Pollini, puts on the oddest Italian accent I have ever heard but delivers his typical brand of offbeat physical comedy. Jon Lovitz is manically obsessed as the loser father who just wants a big piece of the pie. Cuba Gooding, Jr. puts the right spin on his out of favor referee who just wants to forget his gaff that caused many to lose their bets on the big game. Seth Green and Vince Vieluf have some of the funniest moments as the Cody brother when they destroy an airport radar tower or invade a monster truck rally. Everyone in this film pays their dues and each has fun in the process

The visual comedy, much of it very absurdist, works on the lowest common denominator to tickle the funny bone, something that Jerry Zucker has done since his "Kentucky Fried Movie." The gags don't come as fast and furious as they did in "Airplane!" but the set up for the more elaborate jokes is done with style and a solid sense of comedy.

"Rat Race" is "It's a Mad, Mad, Mad, Mad World"-lite. It doesn't have the plethora of comic stars as the earlier film, but the cast and crew are every bit as dedicated in providing a light-hearted, politically correct comedy that won't earn high praise, but won't be derided either. The audience laughed at all the right places and even I laughed aloud a few times.