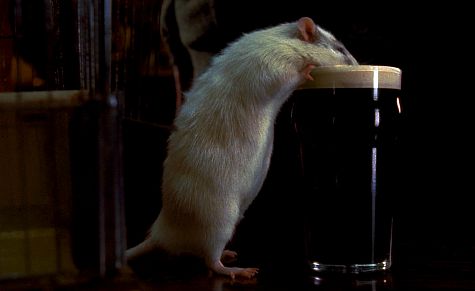 A Dublin family is under siege by neighbors, curious onlookers and reporters after suffering a uniquely tragic event - husband and father Hubert (Pete Postlethwaite, "The Lost World: Jurassic Park") returned from the pub the night before and turned into a rat! While Conchita (Imelda Staunton, "Shakespeare in Love") encourages her husband to clean his breakfast plate, daughter Marietta (Kerry Condon, "Angela's Ashes") tries to keep the latest journalist, Phelim Spratt (David Wilmot, "I Went Down"), from forcing his front door foothold into entry. Then he says the magic words 'book,' 'film,' and 'book of the film,' turning Conchita's head in director Steve Baron's "Rat."

Phelim Spratt takes over dad's room after convincing Conchita that she'll be rich and famous after he helps her write a book about the support and loyalty shown to Hubert by his family. Conchita, who earlier was convinced that her shiftless husband turned into a rat solely to annoy her, now casts a more approving eye upon him. With the ever affectionate Marietta's prodding, the family takes him out to visit his local haunts. Hubert's old flame and current neighbor Daisy (Veronica Duffy) proclaims she'd know him anywhere, as do several friends, but after Hubert downs a pint at the local pub, he escapes, causing a panic. Back at home, the stout drenched rat bites his wife and the family gathers to decide his fate.

Son Pius (Andrew Lovern), an aspiring priest, holds with his earlier, shocking idea that dad should be killed in their oven. Marietta, concerned with genetic possibilities for her future children, suggests a kinder poisoning, then recants. Phelim notes that any rat could substitute at book signings should Hubert be executed, but wise Uncle Matt (Frank Kelly) comes up with the best solution - drive Hubert to a maggot farm and leave clothing with bus fare in case Hubert returns to human shape.

Director Barron ("Teenage Mutant Ninja Turtles") has assembled a game cast and keeps things moving along at a sprightly pace. The film has some truly side-splitting moments, particularly with the mysteries of the Catholic faith, a strength reliably found in Irish filmmaking and the occasional Woody Allen movie. Father Geraldo (Niall Toibin) ponders whether an ill Hubert should be given an exorcism or last rites first and decides on the exorcism because the devil isn't entitled to last rites. Conchita frets over droppings on her doilies while Uncle Matt expounds on the animal kingdom ('The rat's a horse of a different color than the budgie.') and explains why Hubert isn't eligible for unemployment benefits.

Barron doesn't succeed, however, in drawing the theme of Wesley Burrowes' script (particularly the obvious connection to Kafka's "Metamorphosis") into focus. Rather than exploring why Hubert became a rat we instead return to familiar territory about the corrupting influence of fame and the media. In fact, when Hubert's bite turns out to have a vampiric effect, it leads to uncovering the devil in the family's midst. Yet we've never been convinced that Hubert was worth the devil's time in the first place.

While "Rat" offers some boisterous fun, in the end it doesn't add up to much more than paean to family values.