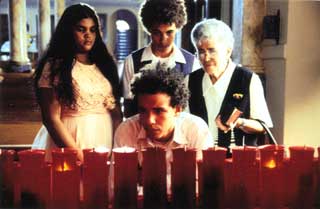 Tyro feature writer/director Peter Sollett has done the seemingly impossible by introducing Victor as a preening sexual predator and leaving him as an honorable innocent. This sweet film is like Larry Clark's "Kids" if they'd all had fiercely loving, religious grandmothers from the Dominican Republic to keep them on the straight and narrow.

Victor's discovered getting easy sex when his friend Harold (Kevin Rivera) calls him from the street and Vicki IDs the apartment window his head pops from. A frantic Victor attempts to stop his sister's gossip by flinging the family phone out the window. After taping it back together, Grandma puts it under lock and key to be used only for emergencies, which, she informs her family, can only occur when she's around to unlock it. Grandma is already perturbed that preteen Vicki is being called upon by Carlos, but when she catches her angel, Victor's younger, lookalike brother Nino (Silvestre Rasuk), masturbating in the bathroom, Victor is blamed for the downfall of the family.

Victor's Grandma isn't the only person with a hand in raising him. Judy seems like a tough chick, warding off the lewd advances of every teenage male she passes. She shares an anti-man pact with her admiring best friend Melonie (Melonie Diaz), but Melonie's secretly begun to see Victor's buddy Harold who sees beyond her geeky glasses. When Victor is formally introduced by Carlos, Judy relents to his old-fashioned courtship, but only to grant him arms-length status as her 'new man.' Victor's combined efforts to redeem himself in the eyes of Grandma and get closer to Judy combust at a family dinner with startlingly fresh results.

Sollett gets astonishing performances from newcomers Victor Rasuk and Judy Marte. Rasuk takes Victor from a lascivious lip-licker to a caring kid via bouts of teenage confusion. Marte gradually strips away a tough veneer to reveal a tentatively trusting center. Rasuk's brother Silvestre is a natural as shy Nino. Krystal Rodriguez has a sullen, lumpish quality as Vicki, but her performance needed stronger direction. Altagracia Guzman, also clearly no seasoned actress, gets by on good will due to the hilarious situations and dialogue Sollett gives Grandma. Diaz and Rivera inhabit their subplot with easy charm and Vasquez is poignant in his pursuit of the uninterested Vicki.

"Raising Victor Vargas" was shot by cinematographer Tim Orr ("George Washington") who dispenses with the pretty images he's delivered for director David Gordon Green and serves up a grittier, urban look here. The hand held camera work can sometimes call attention to itself (a complicated zoom from one end of a swimming pool through two characters' bent heads at the opposite end isn't achieved smoothly), but is overall fitting for the film. Sollett's writing is strong, achieving his goal of innocence regained by the purity of first love and the hilariously misguided efforts of a well-meaning, immigrant grandmother.

"Raising Victor Vargas" is sweet affirmation of the positive effects the love of a good woman (or two) can have on a needy man.

Handsome young Victor Vargas (Victor Rasuk) lives with his grandmother (Altagracia Guzman), brother Nino (Sylvestre Rasuk) and sister Vicki (Krystal Rodriguez) in New York's Lower East Side. He's a cocky guy, very sure of himself, until he falls for the mesmerizing eyes of Judy (Judy Marte) in a modern version of Romeo and Juliet, but without star-crossed lovers or sword fights, in writer/director Peter Sollett's teen romance in "Raising Victor Vargas."

From the start of "Raising Victor Vargas" the amateur caliber of the film is obvious, but I use the term in a good way, as devotion. First-time Helmer Sollett elicits, as the romance progresses and the characters develop, convincing performances from his mostly youthful cast. Most obviously a non-actor is grandma, the family matriarch, played by Altagracia Guzman, in a performance that reminds me of Martin Scorcese's mom's small role in "Goodfellas," but Guzman puts matronly flesh on her character. The rest of the young cast does a steady build, providing real character to their roles.

I did fear, in the opening moments, when Victor is interrupted by his shouting sister just as he is about to get it on with a neighborhood girl called Fat Donna (Donna Maldonado), put me in mind of Lenny Clark's yet-to-be-released "Ken Park" and its sordidness. Fortunately, things take a different tack when Victor sees Judy and love, rather than lust, takes hold.

"Raising Victor Vargas" foregoes the usual angst-ridden sub-drama that we come to expect in ethnic teen flicks that use violence, whether overt or lying beneath the surface, as the draw for its target auds. "RVV" does not go down that path and, when the film is over, it is obvious that it did not need too. Instead, a chaste yet passionate romance is the focal point and is handled in a way that will make parents of pubescent teens a little more comfortable with their kids. Heck, the first kiss between Victor and Judy takes almost 80 minutes to happen.

The matriarchal Latino household is well depicted with granny as top dog and Victor, because of his elder position among the three kids, held responsible for any infractions by him or his siblings. When she catches Victor's brother Nino in the middle of a personal carnal act in the bathroom, Victor is laid to blame for teaching his innocent brother such depravity. In the meantime, Victor is really trying to help his brother attract girls, nicely depicted in a scene where the wise older brother teaches Nino the importance of licking one's lips, keeping them moist as the means to getting the girls to notice him.

It is often the little touches that make "RVV" appealing, like when nana puts a padlock on her old rotary Western Electric phone to stop the kids' contact with the lustful outside world. When, by the end, the lock comes off and all their lives have changed, it is a happily-ever-after ending to a modern fairy tale romance.

"Raising Victor Vargas" is too much a small budget indie film to get more than art house treatment but it is such a well crafted, good hearted teen romance I hope it gets deserved life in the after market.