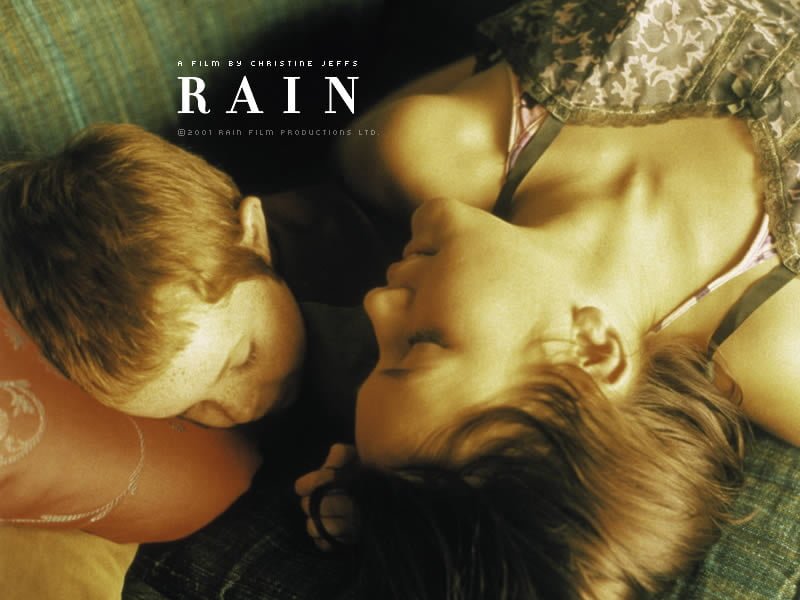 In the summer of 1972, 13-year old Janey (Alicia Fulford-Wierzbicki) observes her loving father Ed (Alistair Browning, "Vertical Limit") and discontented mother Kate's (Sarah Peirse, "Heavenly Creatures") marriage begin to dissolve into a pool of whiskey at their seaside cottage. The arrival of drifter photographer Cady (Marton Csokas, "Broken English") creates a wedge between the mother attempting to revive her youth and the daughter too anxious to leave hers behind in writer/director Christine Jeffs' "Rain."

Jeffs adapts Kirsty Gunn's novel with a strong sense of place and mood. Her collaboration with producer/cinematographer John Toon ("Broken English") is a lyrically moody, poetically foreboding coming of age tale. The fabulous ensemble cast, including newcomers Fulford-Wierzbicki and Aaron Murphy as her little brother Jim, is unforgettable.

In her early 40's, Kate spends her days soaking up the sun and Scotch on the rocks. Her genial, going to paunch husband Ed is always slightly drunk, trying to keep up with her. Clearly he adores her, but she's restless, needing affirmation of the hard, earthy sexuality that's on the wane. Janey watches all, disapproving of and aspiring to be her mother. After a family day spent aboard Cody's boat, Janey's upset by her mother's obvious flirtations, but criticizes her instead for her drinking. 'Boy, you're tough on me girl,' sighs Kate.

The two bond when Janey expresses an interest in one of Kate's flirty shifts, which Kate is happy to tailor for the girl. Fully made up, she wears it during one of her parents booze-soaked parties. Janey vies for Cody's attention, but is only rewarded by interest from a teenage boy. When she dodges his kiss behind a tree, she confronts her mother kissing Cody instead. Her determination to have what she denies her mother accelerates the family tragedy in a way that, temporarily at least, pulls them together.

Sarah Peirse is searing in her portrayal of Kate. Slowly dancing about her living room to "Spooky", glass in hand, she's fully aware of her effect and deigns to indulge Ed with a deep, sensuous kiss. Jealous of her daughter's blooming, Kate makes surface efforts to be a mother and wife, but selfishly allows her own needs to obscure those of her family. Equally strong is Alistair Browning as the good guy who doesn't say much, but lets us see the pain he feels, knowing his wife is drifting away. The look of utter adoration on his face as he watches his wife dance is palpable. The performance is similar to, although more aware and quieter than, Timothy Spall's in "Intimacy." Browning more than anyone brings home the tragedy of the situation.

Young Alicia Fulford-Wierzbicki carefully plays the petulant teenager as her mother's daughter. She has the same type of chameleon like look that changes from plain to sensually interesting depending on light and angle. Young Aaron Murphy is a joyful spirit, sweetness and innocence personified. He's oblivious to the dark clouds gathering around him, his gangly little form symbolic of all the goodness the family has to lose.

Toon's contribution can't be underestimated. His work is stunning, capturing watery textures and the melancholy lighting of oceanside dusk. He catches the children from overhead shots from which his camera sweeps down to level off at the horizon. An image of young Jim racing along the beach with a black cape fluttering behind him is indelible. Composer Neil Finn, of the bands Split Enz and Crowded House, adds to the time and mood with 70's style world music and discordant piano.

"Rain" culminates in a cliche that most audiences should see coming, but the artistry of the filmmaking and intensity of the acting overcome it. Director Jeffs and cinematographer Toon make a splash with "Rain."

This Kiwi coming-of-age flick pits the budding sexuality of young teen Janey (Alicia Fulford-Wierzbicki) against the sexual reawakening by her mother, Kate (Sarah Peirse), when the family rents a cottage for the summer. Kate and her husband, Ed (Alistair Browning) ignore their deteriorating marriage with ample amounts of alcohol every night and sun-drenched hangovers during the day. When a young photographer Cady (Marton Csokas) boats into town, Kate's buried sexuality comes alive and she flirts mercilessly with the handsome younger man.

Janey, an observant teen, immediately sees what her boozing mother is up to and is angered by her infidelity, especially for the hurt it will cause her dad. The young girl realizes that her own sexuality is awakening and she uses it as a weapon against her mother. Janey's kid brother Jim (Aaron Murphy) becomes a pawn in this battle of wills to dire results.

The adult themed story of "Rain" makes this fare for more mature teens and adults, not the adolescent crowd that would be more attracted to, say, another recent coming of age film, "Swimming." The issues of alcoholism, infidelity, cuckoldry, seduction, and responsibility are so many that this could have been a miniseries for television, where, I think, this melodrama belongs. As a film, it has a number of strong points, starting with the absolutely brilliant photography by associate producer John Toon. Toon's eye for film composition is varied and artistic and it shows on nearly every frame of film, propelling the movie above its otherwise obviously low budget. He is a talent to watch.

The raw talent of the principle actors helps, too, to elevate the family soap opera above the average. Down Under veteran actress Sarah Peirse ("Heavenly Creatures") gives an on-the-edge performance as Kate. Living, daily, under the haze of her constant boozing, she takes on a me-me-me attitude and brazenly pursues the willing Cady. She is so driven to bed the drifter it makes me wonder what the heck her marriage has been like to the amiable Ed. Fledgling actress Alicia Fulford-Wierzbicki also gives a strong perf as Kate's headstrong, disapproving daughter Janey. She plays the child becoming a young woman very well, expressively showing her newfound understanding of the power her awakening sex can have. Little Aaron Murphy is absolutely charming and adorable as Janey's kid brother Jim. Alistair Browning gives a gentle perf as the cuckolded father/husband. Marton Csokas is merely OK as the gigolo.

"Rain" is geared to a definitively fem audience and may have some small success on the art house circuit, but will probably do better at the video rental centers that cater to indie films.