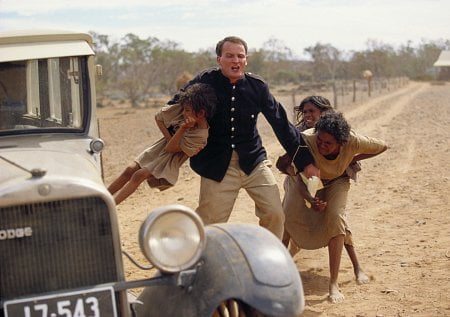 In 1931 Australia Chief Protector of the Aborigines Mr. A. O. Neville (Kenneth Branaugh, "Harry Potter and the Chamber of Secrets") believed that in order to prevent a third, unwanted race, half-caste children should be brought into the white world so that their Aboriginal genes could eventually be bred out of them. He would be challenged, though, by three little girls of the Jigalong mob, who fled his Moore River camp and evaded trackers and police for 1200 miles to return home by following a "Rabbit-Proof Fence."

Director Phillip Noyce ("Dead Calm") and his cinematographer Christopher Doyle ("In the Mood for Love") deliver a one-two punch with this and their upcoming collaboration "The Quiet American." This is the smaller of the two, an Australian indie based on the book by Doris Pilkington, daughter of Molly (Everlyn Sampi), the film's fourteen year old heroine. Stories of injustice have been told before, but rarely have they been told with such artistry. This is a film that lingers.

Molly and her younger sister Daisy (Tianna Sansbury) have a warm, loving relationship with their mother Maude (Ningali Lawford) and grandmother (Myarn Lawford). Their cousin Gracie (Laura Monaghan) and her mother (Sheryl Carter) are also part of the female-centric family circle, whose missing men are the whites working on a vast rabbit-proof fence which stretches across the entire continent. When Constable Riggs (Jason Clark, "Better Than Sex") gets Neville's orders, he forcibly takes the three young girls, leaving three wailing women in the dust of his tires.

The girls are installed in a Moore River dormitory run by the older Nina (Natasha Wanganeen), who tells them they'll get used to it. But Molly witnesses Neville checking the backs of new arrivals. Nina tells her the fairer are educated as they're cleverer. Molly is rejected. She then sees the return of a young girl who ran away to her boyfriend, brought in by Moodoo (David Gulpilil, "Walkabout"), an Aboriginal tracker whose daughter is also being held at the camp. The girl is put into solitary. 'These people make me sick,' Molly repeats over and over. A distant cloudburst signals convenient cover and she determinedly takes her younger charges into the Outback.

Noyce has wisely established Molly as a hunter earlier, so her chance for survival isn't far fetched. The three children's journey is marked by outwitting Moodoo and being aided by strangers - things aren't so black and white here that all whites are bad people. Even Neville (referred to as Devil by the Aborigines) isn't so much evil as deluded by the colonialist thinking of the time, abhorrent as it is. Ironically, the girls are almost captured when assisted by one like themselves who begs them to stay in danger to protect herself from being raped. Another helpful bit of news from a white man causes Gracie to be recaptured. When Molly and Daisy finally collapse in maternal arms, Molly repeats herself again - 'I lost one.'

Noyce gets amazingly natural performances from his mostly inexperienced cast and a perfectly subdued one from Branaugh. The film's beautifully paced and tinged with Aboriginal mysticism by the combination of Doyle's striking camera work, which contrasts dusk silhouettes with blinding heat, Craig Carter's sound featuring cicadas and didgeridoo, and Peter Gabriel's score. A shot of Molly at the fence is cut with a contrasting shot of her mother holding onto the same fence hundreds of miles away, enriching a bond symbolized by the bird of prey Molly's mother said would protect her.

Noyce doesn't let his audience leave easily. As we meet the real Molly and Daisy in present day, closing titles reveal the continuing injustice and hardships they endured after their triumph. "Rabbit-Proof Fence" is a tribute and celebration of a people who survived despite all attempts to rub them out. It is an incredibly moving piece of work.

Director Phillip Noyce brings to life an event in Australia past that was thought, at the time, to be a progressive policy by the bureaucrats of the day. Half- and quarter-cast aborigine children, the product of the white man dominance over the native populous, were taken away from their mothers by the state and shipped to resettlement centers. Once there, the fairer skinned children would be put up for adoption by white parents and the darker ones would remain wards of the state, relegated to menial, indentured labor when old enough. Noyce tells the true story of three young girls, Molly (Everlyn Sampi), Gracie (Laura Monaghan) and Daisy (Tianna Sansbury), who refuse to be a part of the government policy, leave the settlement and make the 1200-mile journey home across the forbidding land, using as their guide the Rabbit-Proof Fence.

Kenneth Branagh is the name actor here as Mr. A.O. Neville, the man tasked with implementing Australia racist policies. He takes a very detailed interest in his job, personally selecting the children that will be torn from the breasts of their mothers. He believes that the state policy of racial purity, designed to keep, primarily, the white man blood unadulterated, is best for the native population. The escape of the three girls comes under his scrutiny as he musters his bureaucratic forces to hunt down the runaways. But, Molly is a savvy youngster and she guides her companions to the rabbit-proof fence that will guide them home. The fence, a tightly woven chain mesh links, spans the vastness of the country to keep the plague of rabbits away from the tasty farmlands of Australia. It is also Molly compass and a symbol of freedom.

Rabbit-Proof Fence is a simple, inspirational tale of triumph and survival as we follow Molly, Gracie and little Daisy while they make the arduous trek, without food and water, to get back home. Along they way they are met by a variety of folk who understand their plight and help them with food, clothes, matches and not a word to the authorities. Meanwhile, Neville sends his best tracker, Moodoo (David Gulpilil), on their trail and it becomes a cat and mouse game as Molly puts all her wiles to work to thwart the tracker man attempts to capture the fugitives.

The vast expanses of Australia are put to good use as the girls cross the huge country. Cinematographer Christopher Doyle crisply captures the beauty and variety of the many locations and there is hardly a kangaroo to be seen. Roger Ford production design is mostly relegated to the girlshome and the resettlement school and his simple costume design has the appropriate period feel.

Rabbit-Proof Fence only touches upon the rigors of survival the children must have faced on their long walk home. Details like the ravages of their journey and the physical toll it must have taken on these kids is given short shrift, but this lack of detail has the benefit of moving things along briskly. More elements about Molly survival skills would not have hurt the film in the least.

Everlyn Sampi does a very good job giving depth to Molly. Noyce elicits a performance that is punctuated with the young actresses fiercely expressive eyes. Little Tianna Samsbury is adorable as the youngest, Daisy. Kenneth Branagh lends his internationally known name and his fine acting to make A.O. Neville a well-meaning but despicable (to us liberals) man who personifies the racist attitudes of the time. David Gulpilil, the veteran Aborigine character actor, is underutilized as the tracker.

The inspirational story, the plucky determination of the kids, the glimpse into another country sordid, racist past, and good production values make up for the minor shortcomings of Rabbit-Proof Fence.