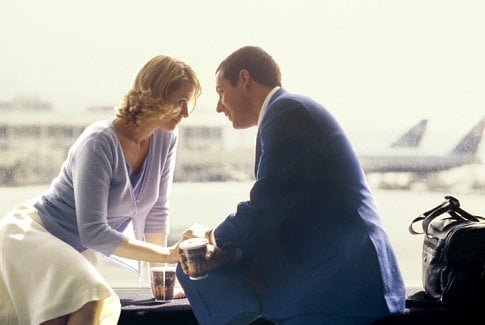 Barry Egan (Adam Sandler) owns a startup business selling novelty toilet plungers. He also is the only boy in his family of seven sisters, has anger management problems, may be a osteopathic loner and has zilch for a love life. Then, two things happen. He comes up with a loophole in a frequent flyer giveaway that earns him over a million miles of free airfare for a pittance and he meets Lena Leonard (Emily Watson) in Paul Thomas Anderson's "Punch-Drunk Love."

Barry Egan (Adam Sandler) runs his own novelty toilet plunger business in desolate L.A. garage space. One day, he witnesses a horrifying car accident, a harmonium is dumped on the sidewalk in front of him, his seven sisters harass him on the phone over a family birthday party and a pretty young woman, Lena (Emily Watson, "Gosford Park"), asks him to watch her car.  Barry maintains a controlled exterior, bottled up in an electric blue suit, but privately boils over into violent rages. As Barry falls for Lena, who's inexplicably interested in him, and tangles with a blackmailing phone sex operator, he finds himself in "Punch-Drunk Love."

Paul Thomas Anderson follows up his magnum opus "Magnolia" with a short, quirky romance inspired by Adam Sandler fandom and the real life story of a man who bought 12,150 pudding cups to get 1 million airline miles.  While the movie suffers from being episodic, it recognizes the Sandler persona in an oddly entertaining way and features a comedic tour de force performance from Anderson regular Philip Seymour Hoffman.

Sandler's characters have always been social misfits, awkward in their own bodies. Take away the funny voice and toilet humor, and what remains is the man you either love or hate from "The Waterboy" - an insecure yet strangely capable man yearning for love, bullied by family, who acts
with bursts of violence. Anderson has Emily Watson love him here, and maybe some who've hated him before will at least come to more of an understanding.

We certainly understand Barry's weirdness after witnessing his borderline abuse and betrayal in the bosom of his family. When Lena turns out to be the same girl Barry's sister Elisabeth (Mary Lynn Rajskub, "Magnolia") has been trying to set him up with, Barry's romantic side must overcome suspicion. Lena laughs at Barry's nerdishly unfunny stories, but just as he warms up asks about an event that embarrasses him, told by a sister. He excuses himself and goes and 'beats up the bathroom.'

In the film's most inspired sequence, Lena phones to tell Barry she would have kissed him and he attempts to make his way back to her door through a barracks-like building of disorienting blank white walls adorned with tiny squares indicating apartment number directions. The pair is often shown in silhouette, like those framed paper cutouts from an earlier age, their upper bodies creating a cartoon heart. Anderson furthers the effect with the inspired choice of Shelley Duvall's rendition of "He Needs Me" from Altman's "Popeye."

Barry's given an obstacle to overcome in the form of Dean Trumbell, the D&D Mattress Guy and phone sex operator from Provo, Utah who sends four blonde brothers to shake Egan down. Philip Seymour Hoffman, in a blonde Elvis coif, turns a couple of verbal confrontations consisting of nyah-nyah level dialogue into high art.

Anderson shot "Punch-Drunk Love" quickly and it shows. Robert Elswit's photography alternates between murky and overlit images. But Anderson and his editor Leslie Jones employ a fanciful effect of color swirled animation to bridge between scenes that adds a trippy quality, while Jon Brion's score is a brilliantly offbeat panache that sounds like sprung springs and
backed up pipes.

"Punch-Drunk Love" is a little like a chocolate milk moustache - something playfully nourishing that leaves a goofy smile in its wake.

Based on the true-life story about the man that became known throughout the airline industry as the Pudding Guy, David Phillips, who found a way to take advantage of a flaw in the Healthy Choice Frequent Flyer giveaway. By purchasing a mere $3000 worth of that company's pudding cups in a advertising promotion he was able to earn 1.25 million miles of free air fare. Writer/director Anderson takes this premise and built it into a funky, quirky little romance that reps a change for Sandler even as he does his usual shtick.

In a departure from the large ensemble casts in "Boogie Nights" and "Magnolia," Anderson has created a minimalist film that delves solely into the mind and character of Barry Egan. Barry has some deep-seated emotional issue after growing up in a predominantly female household. (At a family party, they all keep reminding him that they always called him "gay boy" when he was young.) This past and Barry's present penchant to keep to himself, often with bouts of uncontrolled crying, make the man an outsider to normal society. Then, he meets a pretty young lady named Lena (Watson) who likes him despite his oddball behavior. Meanwhile, he stumbles upon the huge flaw in the Healthy Choice free air miles giveaway. Of course, for a man who has amassed enough air miles to travel for the rest of his life for free, Barry has never been on an airplane.

Things seem to being going great for Egan except for one minor problem. In a fit of loneliness, he makes a call to a phone "companion" line and gives his name, address, phone number, credit card number and social security number after being assured by "Georgia," his phone friend, that it would all be kept strictly confidential. The next morning, Barry gets a call from Georgia demanding that he give her money or she will call his girlfriend. He ignores the threat (Lena is not in the picture quite yet) and is jumped one night by Georgia's four blond brothers and forced to pay up $500. As Barry and Lena grow close, he takes a firm hand in getting a grip on himself and what is really important in his life.

I think, perhaps, that Anderson has taken a too minimalist approach to his adapted material. Economically edited to about 90 minutes, even this seems like too much time for the sparse story and character study presented. There really isn't a great deal to Barry Egan's character. He has sometimes uncontrolled bouts of violence - kicking out his sister's all glass doors and trashing a restaurant bathroom - and is not the best at interpersonal interaction. Besides the violent streak, Barry isn't a bad guy, just boring. Sandler uses his tried-and-try mannerisms and halting speech and does make Barry, Barry, but it is not a stretch.

Like the film, there is a minimalism of other characters when compared to Anderson's previous works. Emily Watson is merely OK as the slightly enigmatic Lena. She is pretty and compliments Barry nicely (they look good together), but she doesn't give her usually precise performance and, occasionally, her American accent takes on a brief veddy-veddy British lilt. The real treat in "Punch-Drunk Love" is a wonderfully loud, faux menacing performance by Philip Seymour Hoffman as Dean, the sleazy boss of the phone sex operation that is bilking Barry. His standalone performance - shouting and cursing over the phone to intimidate - is only surpassed when Barry confronts Dean in person. Barry's sisters are an underutilized resource for family angst comedy as are the blond brothers stalking Barry. Both story lines rep unexplored opportunity. Then again, with Anderson's minimalist approach, their extended inclusion would have defeated the plan. A little more would have been better, though.

Techs are generally good except for some amateur looking camera work early on that takes on a more conventional sweep as the film progresses. Costume design (by Mark Bridges) showcases with the electric blue suit that Barry adopts as his main wardrobe. Production design is nicely varied with the starkness of Barry's work place and Lena's apartment building contrasted by the lushness when their story takes them to Hawaii. Music, by Anderson collaborator Jon Brion, has an edgy quality that fits the tone set by quirky Barry. The use of Shelly Duval's heartfelt rendition of He Needs Me from "Popeye" adds a nice romantic interlude to offset the edge.

The unexplored story opportunities of "Punch-Drunk Love" may have worked against the maker's minimalist intent but it is an interesting exercise by talented writer/director Anderson.