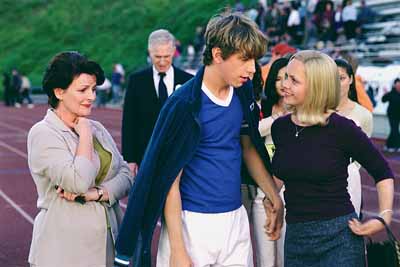 When Alpha Omega Pi head Julie Thurber (Marisa Coughlan, "Super Troopers") decides to beat the Tri-Megas for top Sorority by taking on the tougher charity, training a special needs team for their challenge games, perky sister Carolyn McDuffy (Christina Ricci) is horrified. Carolyn believes everything should be beautiful and perfect, but her world is rocked when she meets her trainee, "Pumpkin."

Here's a movie sure to confound many! This off the wall comedy takes aim at political correctness, satirizes everything in its path and yet manages to charm. Codirected by writer Adam Larson Broder and Anthony Abrams, "Pumpkin" induces disorientation in its audience until they latch on to its skewered world view.

When the disabled athletes arrive, Jeanine flees in terror, but Carolyn staunchly pushes Pumpkin Romanoff's (Hank Harris) wheelchair out onto the field. When Pumpkin locks his big blues on her and stutters out her name, Carolyn freaks, but knows a connection has been made. Ever the 'good' girl, she attempts to fix up Pumpkin on a disastrous double date, but finally must admit to Kent, what he's already guessed - she's fallen in love. Everybody's horrified! Including Carolyn! And Pumpkin's mother! (Brenda Blethyn, "Lovely & Amazing") 'It's not proper to fraternize with recipients of our charity' sniffs Julie, before banishing Carolyn to 'Coventry.'

Broder's social satire, which appears to be set anywhere from the 60s through the present, allows his heroine to find herself by leaving her bubble behind. Only the imperfect outsiders have a clue in "Pumpkin," right down to the smaller supporting players. Broder seems to parallel Todd Solondz's "Storytelling," with a subplot involving a Black intellectual poetry professor (Harry J. Lennix, "Titus") who insults Carolyn's work, but Broder's character has far more sense and heart than Solondz's student and turns the tables in two directions. Just when you think Broder's story will zig, it zags.

Ricci is perky pearled perfection as the blonde bobbed sorority sister who simply screams when presented with the unplanned. Hank Harris has little dialogue, but handles the strenuous physical characterization well. His longest sentence may consist of three words, but when they come, they're a doozy. Blethyn plays his mom hysterically, drowning her realization of Pumpkin's adulthood in alcohol. Lisa Banes ("Dragonfly") plays Mater McDuffy like one of those dolls whose expressions changes when you turn its head, all smiling sweetness to her daughter's face and horrified denial behind it.

Playing Ken to Ricci's Barbie, Sam Ball is caricature personified and he couldn't be better. Kent Woodlawn goes through as extreme a character arc as Carolyn and Ball makes the journey hilarious and even touching. Coughlan seems to be channeling a young Stockard Channing as the single-minded sorority head.

From the gonzo musical selections ('Stars of track and field are beautiful people') to the kitschy makeup and costumes, "Pumpkin" is packed with perverse pleasures.

The Alpha Omega Pi sorority of Southern California University have longed to wrest the title of Sorority of the Year from the 5'8"+ "mastodons" of the Tri Omega house. This year the A.O.Pi's think they have an ace-in-the-hole when they volunteer to help train a group of handicapped kids for the upcoming special Olympics-like event. But, perky sister Caroline (Christina Ricci) has a problem with the helping her assigned student, a boy named "Pumpkin."

I watched the production clips supplied by the studio for "Pumpkin," before going to see it, and I groaned. The individual scenes looked silly, stagy and without any humor. But, I had watched them out of context and was surprised (pleasantly I might add) when I walked out of the theater to discover that the film is an absolute charmer.

"Pumpkin" mixes a period tale that has the feel of the 70's (but won't let itself be nailed down to any one era) with a great deal of satire, goofy slapstick, social consciousness and wit that showcases its star, Ricci, and reps one of her best roles yet. It helps that she has a solid supporting cast that help enrich the film. Caroline McDuffy is bright, perky and dedicated to a life where everything is bright, shiny and well ordered. She and her friend Jeanine (Dominique) are appalled and upset when A.O.Pi's president, Marisa (Julie Thurber), declares that, to win the coveted S.O.Y. award, the house will provide personal training for handicapped contestants in an upcoming special games. Each sorority sister is given a picture and a bio of their athletically challenged wards and Caroline is horrified with her assignment - wheel chair bound Pumpkin (Hank Harris).

Jeanine outright refuses to participate in the contest and is ostracized by the rest of A.O.Pi. Caroline halfheartedly goes along with the plan and soon learns that Pumpkin is kind, sweet and, surprisingly, intelligent. Unexpectedly, she also falls in love with the physically challenged athlete and earns the disdain of her A.O.Pi peers, Pumpkin's protective mother Judy (Brenda Blethyn), boyfriend Kent (Sam Ball) and even her own mom, Chippy McDuffy (Lisa Banes).

There are several elements in "Pumpkin" that make it a teenage film that is adult in stature. The intelligent script has ample amounts of subtle humor with some of the gags played out like an involved joke with a punch line worth waiting for. There is never any kind of condescension towards the handicapped as writer/co-director Adam Larson Broder (sharing helming credits with (Anthony Abrams) shows the kids as just plain folk - bullies, victims, heroes and villains abound, just like with "normal" people.

The supporting cast is almost an embarrassment of riches with outstanding performances on many levels. Hank Harris does a credible job as the challenged title character, a tough role to pull off. The newcomer thesp has minimum dialog and has to convince us of his handicap and metamorphosis caused by his love for Caroline. He succeeds. Marisa Coughlan, as the over achieving sorority prez, gives a dead on perf. One of my favorite characters is Sam Ball as Kent Woodlands, the living and breathing Ken doll opposite Caroline's Barbie-like persona. He is strikingly handsome with his lantern jawed face and sensitive demeanor (he's not a man who is afraid to cry) and Ball gives the character dimension. Blethyn puts decent spin on her role as Pumpkin's mom, a lady who sometimes gets into her cups as she realizes that her boy has become a man. Banes makes the most out of her tiny part as Caroline's concerned mother.

It is always a pleasure when your go into a film with low expectations and come out discovering a pleasant diamond in the rough. "Pumpkin" is not a perfect film. It meanders at times and is a little too long, but there is such smart writing, wonderful performances and well-told humor you can forgive the flaws.